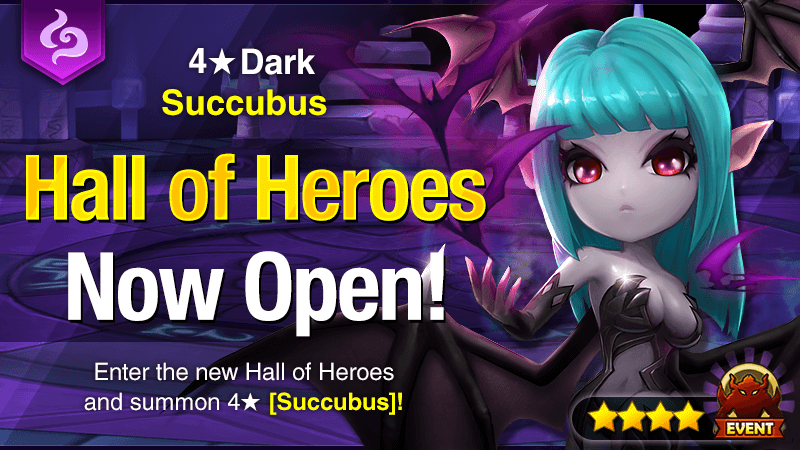 <![CDATA[<span style="font-weight: 400;">On Wednesday, June the 12th, 2019, the Hall of Heroes for the dark Succubus Isael was announced. I 100% expected this for a while now. Her design and color scheme is halfway decent, but she’s basically a dark version of her fire sister Akia and is better for skillups or six-star material. Before we begin, Hall of Heroes is a lot like Trial of Ascension, so that means you can use Trial of Ascension strategy and monsters (e.g. attack bar pushbacks, stuns and continuous damage are king). I strongly advise bringing your regular Trial of Ascension team. In my case, I’m using Baretta (L), Frigate, Maruna, Shaina, and Charlotte. Let’s cut the chatter and get on with it!

Not really, no. Again, Isael is extremely similar to Akia, except that Isael’s third skill is based off of her enemy’s Max HP. Her third skill, Night Hag’s Scuttle, attacks all enemies, puts Unrecoverable on them for two turns, and deals 50% more damage if the enemy she attacks is asleep instead of destroying their max HP. Keep in mind that all the Succubi have at least one skill that puts their enemies to sleep – namely, their first skill. Izaria and Aria are way better than everyone else in the family, and even then Aria’s somewhat fallen out of use. Izaria does have a pretty high spot in 4-star RTA, though. Rune Recommendations: None. 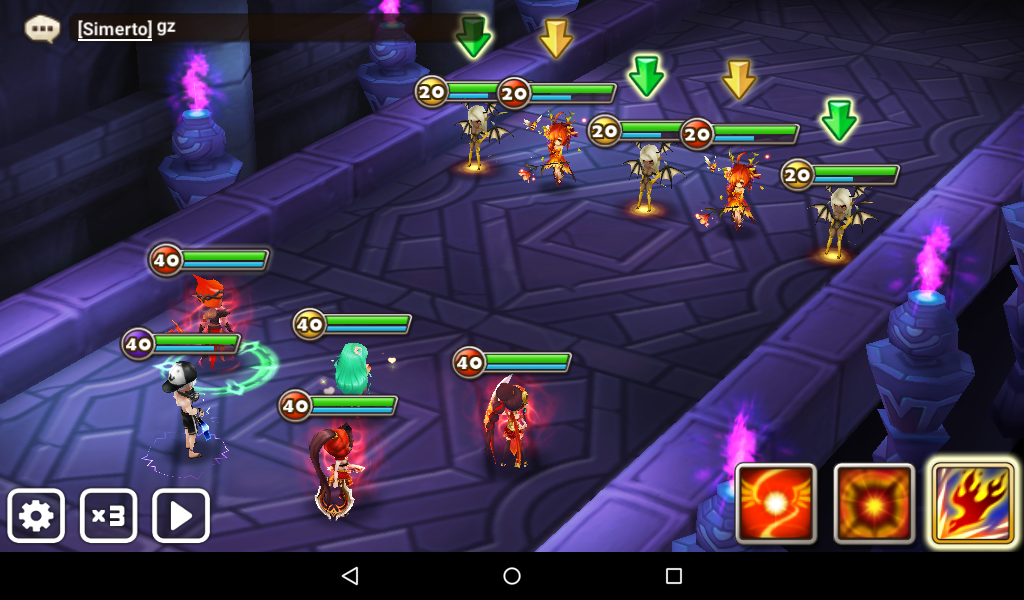 Today, we start this Hall of Heroes with three Selenas (wind Succubi) and two Nishas (fire Dryads) The Threat: Uuuuugh. Have I mentioned that this Hall of Heroes of SUPER annoying, because of the Succubi and their “ohhh we don’t wake up enemies under sleep” mechanic! A-anyway, I’m gonna have to say that Selena is the bigger threat here. Her third skill, Blooming Nightmare, recently got buffed. Now, it randomly attacks enemies five times, without awakening any enemies asleep. She’ll put enemies to sleep for 1 turn, and enemies already asleep get 50% more damage dealt to them. Support-wise, though, then I’m going to have to go with Nisha as the bigger threat. Nisha’s second skill, Honey Bee Friends, will take all the harmful effects off of all her allies, and then apply them all to an enemy. If no one has any harmful effects on them, though, then she will heal all her allies by 10%. Whether it’s her Max HP or their Max HP, I don’t know. The wording is kinda unclear. Her third skill, Flower Fog, is a bit like her dark sister Hyanes. (Noticing a pattern here…) While Hyanes’ third decreases beneficial effects by 1 turn and increases harmful effects by 1 turn, Nisha’s third shortens the time beneficial effects have by 1 turn. However, every enemy who doesn’t have a beneficial effect on them will instead have beneficial effects blocked for 2 turns. The Solution: Take out Nisha first. Seriously, you do not want to have her attack you with Honey Bee Friends and put all those stuns and DoTs onto what may be a crucial monster. You just don’t. If you can’t immediately kill her in 1 shot, make sure you at least stun or otherwise immobilize her. While you’re at it, make sure you sutn the Selenas. They actually do pack quite a punch – their second skill is Strike of Rejection, and is it just me, or does Strike of Rejection hit harder than the other second skill of the Succubi, Twisted Joy? 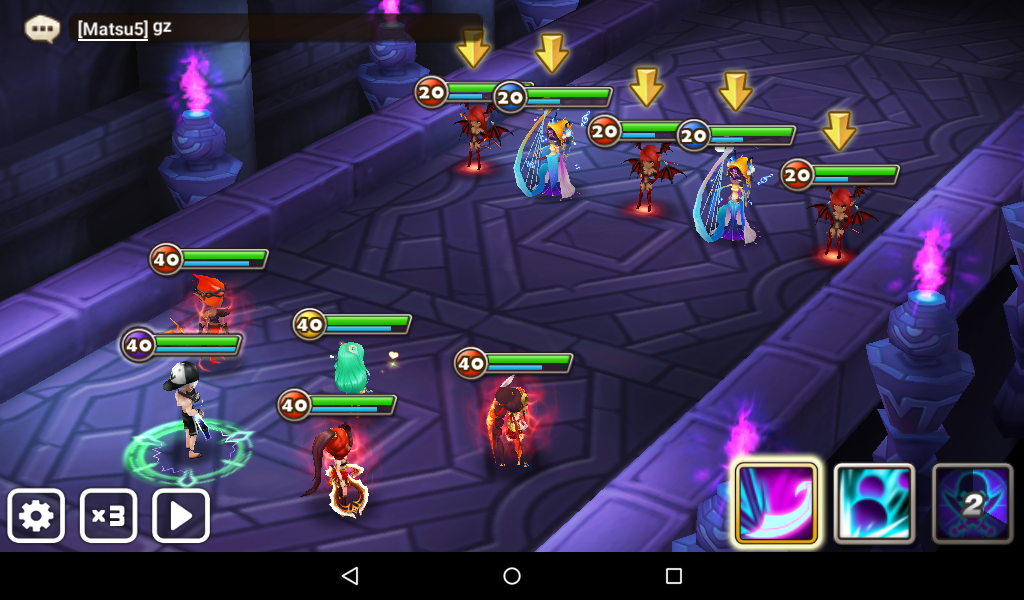 Alright! Now, we’re going to start Stage 2 with three Akias (fire Succubi) and two Sonnets (water Harp Magicians) The Threat: Oh my god, SONNET. Sonnet, Sonnet, Sonnet. I hate her so much here, you have no idea. Don’t get me wrong, as a monster that you own she’s great in RTA and ToA. Her entire thing is about the sleeps and stuns. Her first skill puts people to sleep, her second skill is an AoE sleep that also inflicts 2-turn DoTs, and her third skill Nightmare Melody attacks all enemies based off her Max HP, creates a shield equivalent to 30% of the damage on her allies, and puts all enemies to sleep for 1 turn. Combine that with the fact that a Succubus can’t wake up enemies under Sleep, and that Akia’s third skill attacks all enemies and destroys their Max HP by half of the damage dealt. And still doesn’t wake up any enemies that are asleep. You can see why I hate the Succubi now. The Solution: Oh my god, kill Sonnet first, I am not even joking. Yes, she’ll probably do less damage than Akia, but you do not want her to put all of your mons to sleep. It is the most infuriating thing anyone could witness. Once Sonnet is dead, you can safely work on Akia as quick as possible. Please note that Will runes and Immunity buffers are hard counters to pretty much all these stages, so bringing somebody like Fran would work wonders. Additionally, AoE Provoke monsters such as Jeanne would also work well in a pinch, because then they’re forced to target her with their first skill. Granted, she may get put to sleep, but that’s okay, because everyone can only use their first skill. 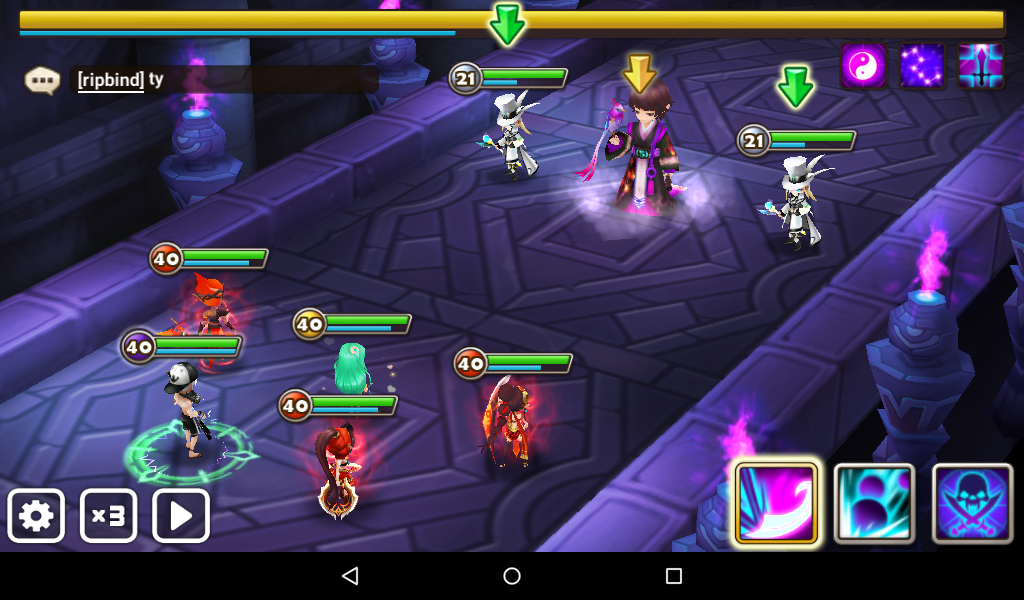 Miniboss time! Here, we have a Woonsa (dark Pioneer) and two Louises (light Phantom Thieves) The Threat: So, as it turns out, this is like the one stage that Immunity can’t counter. Woonsa’s third skill, Inhale Magic (heh) will steal the HP of all enemies by 15% of his HP and also steals the beneficial effects off of them and places it on himself. …Problem is, when you’re at the highest stages of Hall of Heroes, him using Inhale Magic would be enough to instantly one-shot all your monsters. I watched him on floor B8, and 15% of his HP was about 23k or something. Everyone died in one hit in an instant. There’s also Louis. Now, Louis isn’t enough to insta-kill everyone like good ol’ Woonsa here, he’s quite annoying in a different way. You see, his third skill Illusion Magic got buffed a while back so he’s not completely worthless. He evens out the HP ratio of both himself and a chosen ally, and then he’ll make himself and the ally Invincible for 2 turns. He’ll end up decreasing the cooltime of his third by 3 turns if his HP ratio is 50% or lower after the balance. Also keep in mind that when fully skilled up, Louis’s cooltime on Illusion Magic is 6 turns. Granted, unskilled is 8 turns, but that’s still not that much if his HP is below that threshold. The Solution: Go straight for Woonsa. I’m not sure if HP destroy works on a Hall of Heroes boss, but if it does, then definitely take any monster that has HP destroy. It could mean the difference between life or death; every little bit helps. You actually don’t have to take out his lackeys anymore, just like in the main boss of Hall of Heroes, so you really only have to immobilize them. But once Woonsa’s dead, you can move on to stage 4! 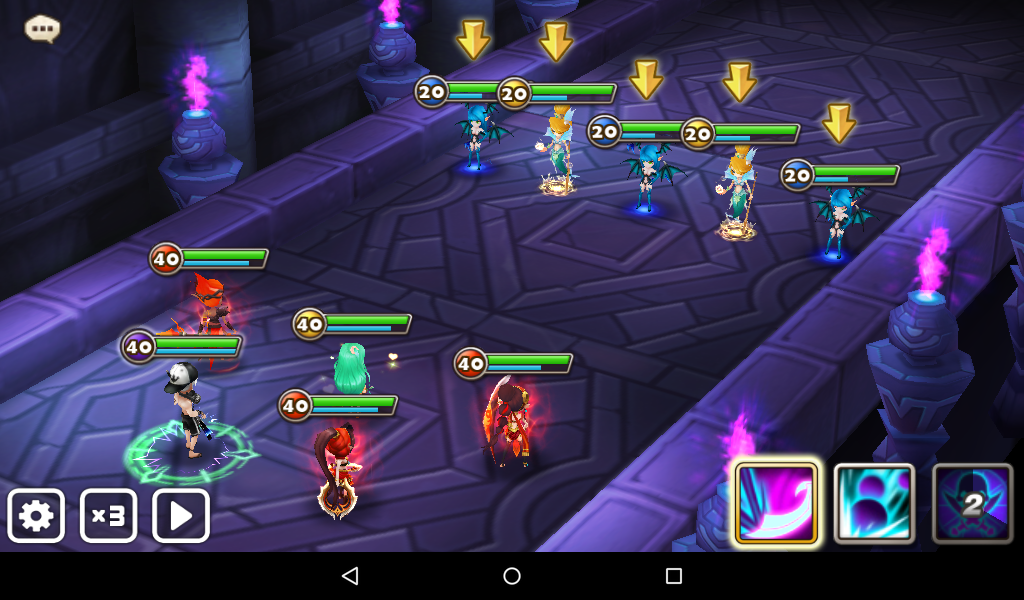 Alright, now we’re getting somewhere! Here, we have three Izarias (water Succubi) and two Cichlids (wind Mermaids) The Threat: Okay, so Izaria’s actually pretty good in RTA. The RTA meta right now is apparently “turn cycling, provoke, crowd control, and single-target focus.” Izaria hits all these except for the Provoke. Her third skill Parting Gift attacks four times, recovering half the inflicted damage as HP, and also absorbs 15% of the enemy’s attack bar. If she completely depletes it, then she’ll put the enemy to sleep for 2 turns. Cichlic is also a single-target nuker. Her third skill, Crushed Hopes, will attack an enemy three times. Hit 1 removes beneficial effects, and Hits 2 and 3 both have a chance to increase their skill cooldown by 2 turns or break their defense for two turns. It really hurts. The Solution: Take out Izaria first. Wow, I really hate Izaria in this stage. She kept attacking my Shaina and Maruna, both of whom are kind of squishy, so half the time Parting Gift doesn’t put them to sleep – it kills them. Cichlid was less of a threat solely because Izaria went absolutely ham on my team this whole time. 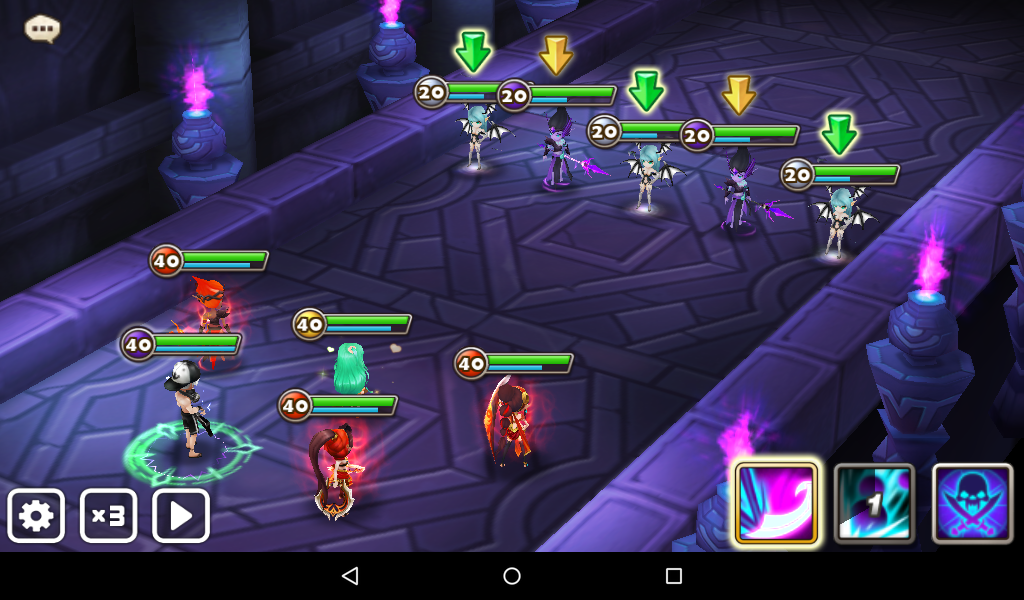 It’s time for the last stage before the boss! Here, we have three Arias (light Succubi) and two Aschubels (dark Sylphids). The Threat: The threat here is definitely gonna be Aria. For a while, she was considered the best Succubus, due to her third skill Curse of the White Night, which attacks all enemies, decreasing their attack speed and increasing chances of landing a Glancing Hit for 2 turns. She was used on Despair in ToA for the longest time, but she fell off about a year ago, even before the twins were released. However, Aschubel is actually a great crowd control, and I consider him pretty underrated. His third skill, Nightfall, will put all enemies to sleep for 2 turns. Remember that Aria has an AoE attacks and doesn’t wake up enemies that are asleep. I keep driving this in because I got killed so many times from a simple screwup that led to Aschubel using his third and them Aria using Curse of the White Night. The Solution: Kill Aschubel first. This way, you won’t have someone who’s landing constant AoE sleeps on your enemies, which would in turn cause Aria to unlock her true potential. Basically, if you’re hit by a Succubus while asleep, sleep basically becomes a stun or freeze to them. If you can’t kill Aschubel in time, you can at least come prepared with Immunity, high resistance, or Provoke. This will in turn cause Aria to be unable to land her debuffs if you have Immunity on. 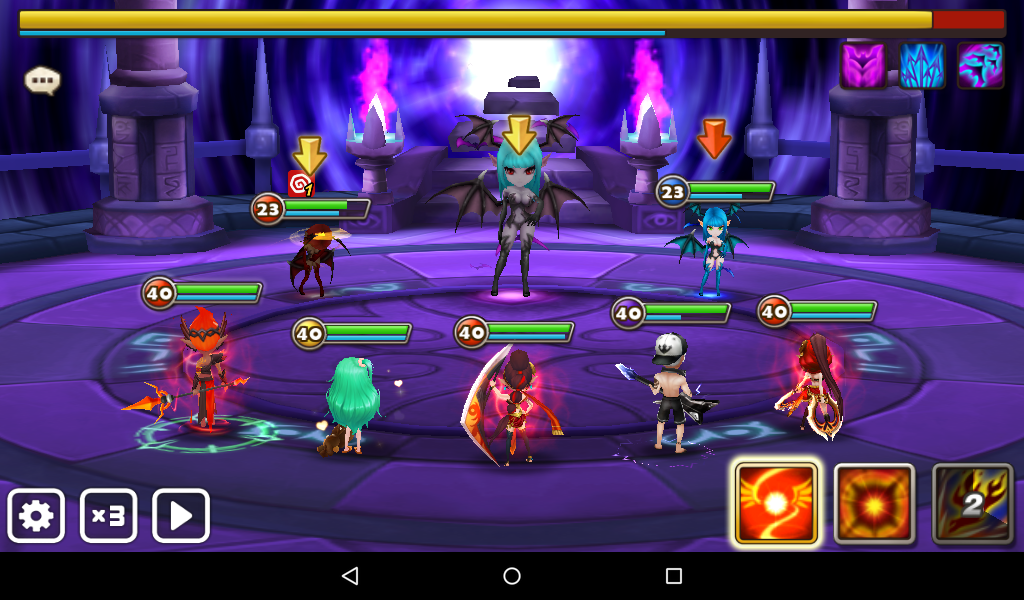 Boss time! Here, we have an Isael, and her lackeys Akia and Izaria. Granted, the lackeys change every stage, so this place has the most variety of the HoH. The Threat: The threat here is going to be different, because the lackeys are going to be different each round. However, here, I would say the threat, from most to least, is Izaria, then Akia, and then Isael, due to the fact that Akia destroys Max HP with her third. The Solution: There’s no one-size-fits-all solution to use here, because again, the lackeys are gonna be different each stage. However, I would take out Izaria first and then go for Isael. This HoH is actually one of the easier ones. There aren’t any Immunity buffers or Invincibility bringers (minus Louis, but no one likes Louis). I hope you guys enjoyed this article, because I certainly enjoyed writing it. I’m Sara Ann, and I’ll see you in the next article!]]>