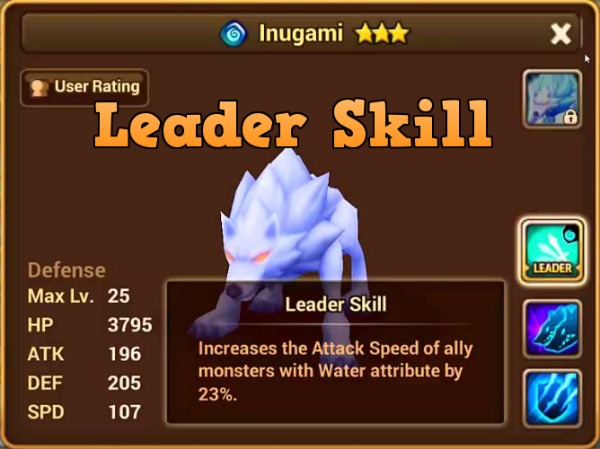 <![CDATA[<iframe src="https://www.youtube.com/embed/UnylMOBmnXM" width="854" height="480" frameborder="0" allowfullscreen="allowfullscreen"> Summoners War, like most turn-based strategy MMO’s, provide us with many ways of improving our units to accelerate our progression. Leader skills are one of the easiest ways to do that. Leader skills are passive abilities some monsters have that benefit the party when the unit is placed in the Leader position. These skills, unlike regular skills, stay active even when the unit dies in battle. In Summoners War, each type of leader skill has their advantages and disadvantages.

Universal Leader Skills – The biggest advantage of a universal leader skill is that you can use it in any aspect of the game. The biggest disadvantage is that these skills generally provide smaller bonuses compared to their counterparts. The good things about Summoners war is they give anyone an opportunity to get units with universal leader skills by providing us with a fusion hexagram. You definitely want to keep this in mind as the units available in the fusion hexagram contain kits that are widely known as some of the top units in the game to improve your progression. (Ex. Veromos – Dark Ifrit & Baretta – Fire Sylph)

Dungeon Leader Skills – Cairos Dungeon is the first area of the game where team-building and strategy become important. As you start to create teams you realize that some of the strongest leader skills are only available to teams of the same element. The cairos dungeon is considered the cornerstone of the game. In order to improve you units, you need to farm runes. While you can attain runes in regular scenario dungeons, Cairos dungeon will provide you high-quality runes that you can use in the later stages of the game. Summoning a monster with a Dungeon leader skill will allow you to expand your range of units and increase your success rate. (Ex. Lushen – Wind Joker & Verdehile – Fire Vampire)

Arena & Guild War Leader Skills – The PVP-based leader skills, like dungeon leader skills, allow you to create different compositions to give you an advantage over your opponent. While some players may not be fans of PVP, it is strongly recommended to participate; The points associated with winning and/or losing allow to you purchase different buildings within the glory shop & guild war shop that give permanent bonuses. The bonuses from the arena buildings carry over to all content the game. Unfortunately, the guild war bonuses can only be used within that feature. (Ex. Megan – Water Mystic Witch & Vanessa – Fire Valkyrja)

Mono-Element Leader Skills – These Leader skills are some of the first ones that will be available to you when you play Summoners War. These skills generally provide larger bonuses than their counterparts; however, they are limited to the party members that share the same element as the unit with the leader skill. The good thing about this leader skill is that even though there are other leader skills that are preferred, they are still used in the mid to late stages of the game. (Ex. Bernard – Wind Griffon & Ariel – Water Archangel) Below is a quick leader chart of all the available leader skill from all types of monsters: [table id=41 /] In conclusion, Leader skills & and team theorycrafting are some of the many elements in the game that make it so enjoyable. When testing new methods, have an open mind as you never know what combinations you may create to be victorious!]]>