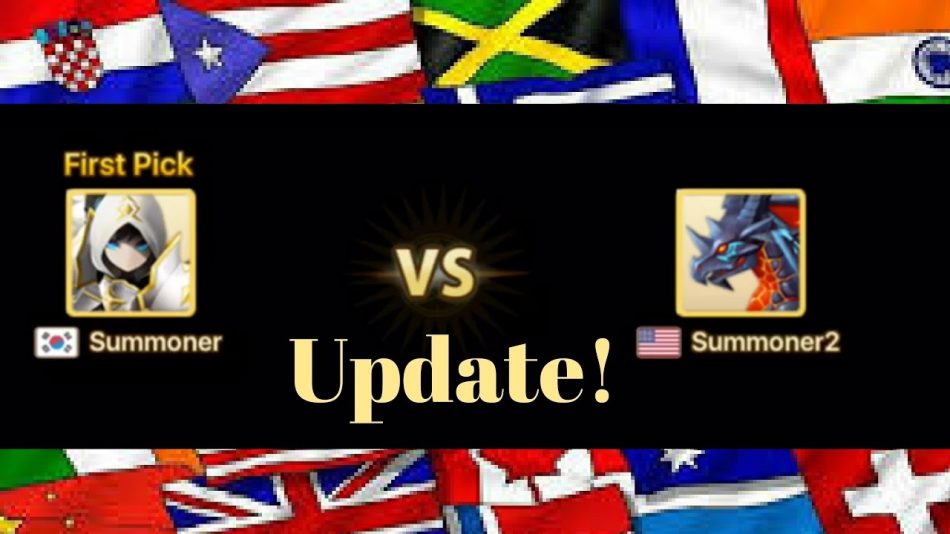 Live PvP is out, and now it is cross-server!

Below is the patch notes from the developers.

Please see below for more info on the 3rd Live Arena Test Service.

– The biggest change in the 3rd Live Arena Test Service is the new [World Arena] content where players can battle against other players from all around the world.

– Currently, Summoners War is being serviced separately in a total of 6 Servers (Global/Europe/Asia/Korea/Japan/China). The new [World Arena] content will allow all users from all servers to compete against each other.

– Several modifications will be made to the Live Arena Service, so please read below for the details.

– The Ranking Grade will be modified as follows.

: The Ranking Grade of the 3rd Live Service will be as listed above and we’ll be modifying the ranking grade after the service, if necessary.

– The country info of each player will now be displayed in the World Arena.

: Here are some examples of the modified UI. Furthermore, the world ranking along with the country info will now be shown as your ranking info.

However, please note that the Visit feature won’t be available due to the change in the ranking system. : We’ve decided to decrease the time limit so the users can enjoy the battle at a faster pace.

Please note that this modification is not permanent and there may be changes made after the service.

– That’s it for the modifications on the World Arena. Please keep reading if you’re curious about the Official Live Arena Service.

– We’re currently preparing for the official service of the [World Arena] as the 3rd test service will be our last test service.

Please see below for the details.

: We’ll be adding a new Speculate Mode and a Replay Feature to enable users to watch their friend or a top ranker play in the Live Arena.

You’ll be able to cheer for your friend and also strategize your gameplay by watching others play.

: Though we haven’t finalized our thoughts on the World Arena Reward, we’ll give you a brief introduction about the reward.

: First of all, we’re trying to avoid rewards with too much value because they might encourage users to forcefully play the Live Arena. We’re sure that there are some players who aren’t in favor of playing the competitive PvP content, and we thought that it’d be unfair for them if the Arena Reward creates a gap between those who play in the Live Arena and those who don’t.

: Secondly, we think that the reward should be attractive even if it might not be highly functional. Though this may sound conflicting, we’re trying to come up with a reward that’s special enough to encourage players who enjoy the Live Arena to keep playing the PvP content.

: We’re trying our best to come up with a special reward that can satisfy all users, so please be patient with us.

– Live Arena Season
: The Official Live Arena will be operated in seasons. We haven’t decided on how long each season should be; however, we’ll be taking our time to go over this matter since it’s closely related to the reward system. Please note that there may be changes made, if necessary.

– Various Modes
: We’re planning on adding various modes, such as league or tournaments with special conditions, so the players can enjoy various modes in the Arena. Please stay tuned for more info on different modes!

We’ll be back with more exciting news, next time!