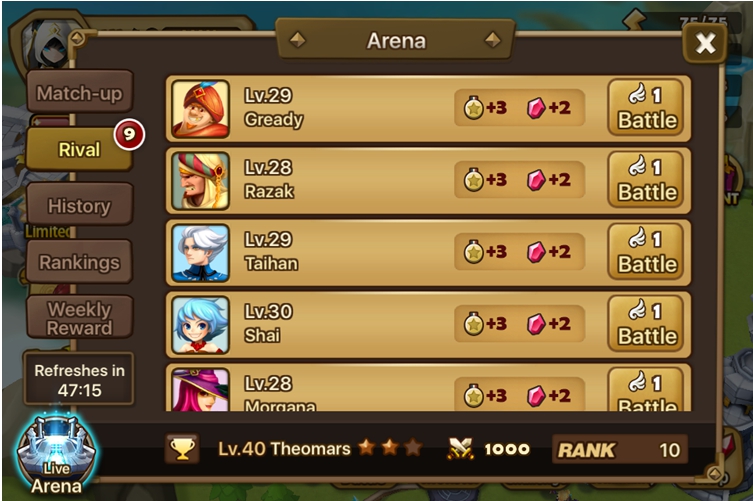 <![CDATA[<strong>Note:  Knightly Gaming has made us a sweet video on how to battle Live PvP! The update is out, and Com2Us has introduced stage 2 of Live PvP! You will notice the same mechanics as the first stage, but with the addition of a separate arena with its own leaderboard! “Pick 5 monsters yourself and ban 1 of your opponent’s monster! It reminds me of League of Legends pick and bans. :)” You get 30 chances a day to do live battles against random opponents. (You can still challenge your friends any time you want without restriction). In addition to the second stage of Live PvP, Com2Us came out with a private chat option. Use the private chat tab to talk to your friends or players in your public channel directly. There were also a few minor bug fixes, but nothing about the additional raid bosses yet. Thanks Com2Us for putting out great content and please open up the new raids soon! Full patch notes can be found here.

– New [Live Arena] Points have been added. : The Point System will be the same as the [Arena] Point System, but the Live Arena Points will not fall below 800 Points. – New [Live Arena] Grade has been added. : The new [Live Arena] Grade System will be the same as the [Arena] Grade System. – The [Live Arena] Points and Grade will not be tallied up or reset. However, the Points and Grade may reset with the Live Arena System Modification in the future. – There will be no additional rewards available during the 2nd [Live Arena] Test Service. [Rule Modifications] – Players won’t be able to check each other’s Leader Skills in the Battle Preparation Menu until the opponent selects the Leader Skill. – The timing and MAX value of the additional effects (Attack Power Increase/ HP Decrease) activated during the battle have been modified as follows. : Modified the timing of the stat change after 30 turns Before: 30 turns – 10 turns – 10 turns … After: 30 turns – 15 turns – 15 turns … : Modified the MAX value of the increase in Attack Power/ decrease in HP Before: 90% MAX After: 70% MAX