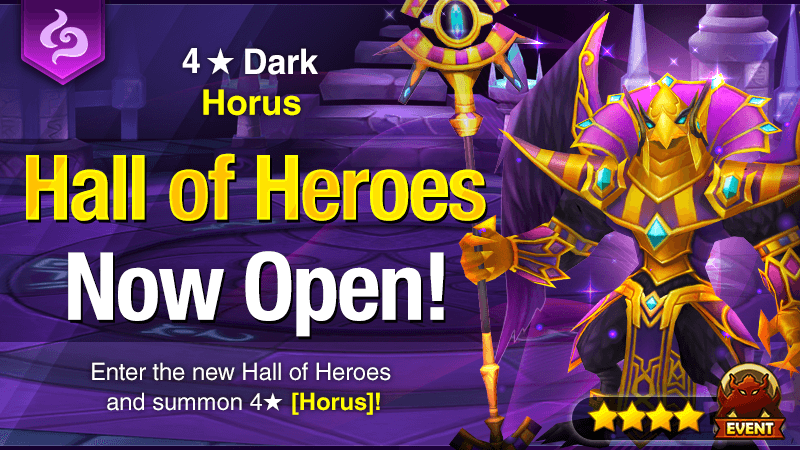 On Wednesday, May the 11th, 2022, the Amduat (dark Horus) Hall of Heroes was announced. He’s really good, actually; he’s great at cutting in front of enemy teams and completely messing up their turn order.

Amduat is actually one of the better LD 4 stars in the game! Thanks to his passive that grants him Attack Bar every time an enemy gets a turn, it’s really easy for him to cut in between enemies and completely mess them up. The turn messing is especially useful with Amduat’s S2, which decreases the enemy’s attack bar by 30%.

Although he doesn’t do everything under the sun, he’s still a pretty good option for people who want something to mess around with.

Welcome to Stage 1. To start off our journey, we have three Imeseties (wind Horuses) and two Kakis (fire Onimushas).

The Threat: The threat here is going to be Kaki. Does anyone else remember when the Onimushas were first released, Kaki turned out to be really good, he got nerfed in the middle of a Siege battle, and everyone was so upset about it? I remember too. He still does some insane damage, and Imesety makes it so that the additional damage he inflicts proportionate to his defense is way higher.

The Solution: I’d probably say go for Kaki first. Although he can’t land a critical hit on your team, his damage is still a lot to watch out for, and it’s best to deal with him before he can burst down one of your units. After that, Imesety is really easy to deal with.

The Threat: Similarly to Imesety with Kaki, Tanzaite is probably the bigger threat here, when he’s not turned into a statue that is. However, Duamutef can consistently deal more damage, along with buff up the defense of Tanzaite (causing him to deal more damage).

The Solution: I think the solution here is to deal with Duamutef first. Tanzaite, once he’s below 50% HP, will turn into a statue on his next turn. Although in the lower floors, you can easily burst him through and kill him before he gets a turn at that point, it’s just best to get rid of Duamutef first to ensure that he doesn’t make it harder to kill Tanzaite.

We’re already halfway through! The miniboss here is going to be one Nyx (dark Fairy King) and two Tablos (light Dice Magicians).

The Threat: Oh, Nyx is definitely going to be a bit of an annoyance to deal with. I still remember his old passive, and how it was downright useless before his buff. These days, Nyx’s passive is really annoying to deal with; decreasing the chances his allies get harmful effects, while also increasing the duration of harmful effects on all enemies.

Also, Tablo is a pain to deal with, as he completely resets the attack bar of everyone in the battlefield, but also increases the speed of his allies for a turn while also stunning himself. Basically, he’s like the Tiana of the attack bar world.

The Solution: Just aim straight for Nyx, man. Tablo is going to be a pain to deal with, and you don’t have to kill the miniboss’s servants in order to continue. Just burst down Nyx and go before you can get too caught up in this stage.

We’re more than halfway through! We have three Qebehsenuef (water Horuses) and two Cordelias (wind Blade Dancers). I will be referring to the Horus as Qebeh here.

The Threat: Yes, that is Qebeh’s actual name, copy and pasted. Anyway, Cordelia is the bigger threat, because she’s fast, and deals damage. A lot of it. Qebeh just buffs up Cordelia to do her job, but that doesn’t mean you should just sit there and let them both live.

The Solution: Kill Cordelia first. Although Qebeh buffs her up, if she’s dead they can’t really do much by themselves. After that, you can safely blast down the three Qebehs and then move on to stage 5.

We’re almost at the boss! We’ve got a Wedjat (light Horus) and two Isabelles (dark Assassin).

The Threat: Did you know that Wedjat is the only LD5 of the entire Horus family? Despite that, his kit… isn’t exactly the best. Isabelle is going to be the bigger threat of the two, due to her high amounts of single target damage and how fast she can refresh her cooldown.

The Solution: Go for Isabelle first, preferably before one of them uses their S3. When anyone on the battlefield dies while her s3 is on cooldown, it will automatically reset and she’ll be able to use it in the next turn. You really don’t want to have to deal with that.

We’re at the boss now! We’ve got an Amduat and two other Horuses; in this case, though, it’s Duamutef and Imesety.

The Threat: The threat here is going to depend on who the other two Horuses are. More likely than not, though, the threat is going to be Amduat, due to the fact that he’s easily one of the best in the family, and all the other Horuses are… situational, at best.

The Solution: The situation actually does stay the same no matter what the lackeys are. Take out Amduat first. I’m not kidding when you say it’ll be so much better than messing around with the other Horuses; considering Amduat gets a turn every time the enemy does, killing him as fast as possible is beneficial in the long run.

I hope you all enjoyed this article! How many Amduats did you get? In the meantime, I’m Sara Ann, and I’ll see you in the next article!