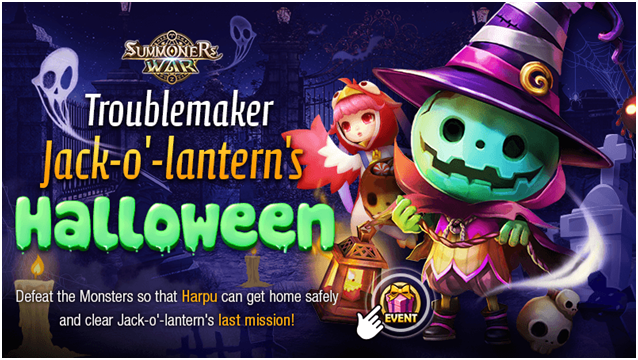 <![CDATA[<em>“Out late, aren’t we?~” Colleen jumped at the sound of the voice. It sounded young, around her age. She started shaking slightly, trying to be brave, but couldn’t. “Shhh, don’t be scared, little birdie; I won’t harm you~” The fog to the left of her cleared, revealing a small boy sitting on a tree, legs dangling off the edge. No, he looked different from humans. She realized that his head was a pumpkin – a pale blue of sorts. His face was carved in like the pumpkins she and her Summoner had carved back on the island. He wore a black robe, the edges torn, and in one hand he held…something, she couldn’t make it out. “M-my Summoner told me not to talk to strangers…” She whimpered. His smile seemed to widen somehow as he tilted his head a little at her. “You’ve got a smart Summoner.” He purred. “I’ll tell you what: My name is Dusky and you are Colleen. Now we’re acquainted.” “How do you k-know my name?” Colleen was positively afraid, now that this “Dusky,” whom she never met, knew her name. Happy Halloween, you guys! That little tidbit up there was actually something I’ve been writing for a little bit; it’s for a oneshot based on this new Halloween event. Unlike other events, this one actually has a story to it, albeit a bit vague. Basically, the story is that Dusky has been a troublemaker and is bothering Colleen when she just wants to get home from the Halloween party. However, in this event, we have to defeat monsters to help clear the path for her and get her home safely (though this element isn’t in my oneshot) Today, we’re going to talk about this event, and what the most efficient way to clear it is.

Alright, so we know the story behind this event, now let’s talk about the event itself. We’re going to start with the “xyz of the day” of this event, such as in the Mastery Event you logged in once a day to get 30 Energy. Instead of logging in once a day and 30 Energy, you have to defeat 500 monsters in order to get 30 crystals – one refill worth of Energy. If you’re like me and have their full 90 Energy storage, this is great than just a third of our Energy count. This will go towards your Defeated Monster Count. At certain points, you’re going to get rewards. I’ll list them out: You may be focusing on the 4,000 monster prize, the Eerie Garden. You’re probably asking “What is it?” I’ll tell you: It’s a Halloween-exclusive building, like that campfire building that’s been floating around on reddit! I don’t own the campfire building myself yet (nor do I have the Eerie Garden yet) but that’s not the point. I don’t have an image of it myself, so here’s one I shamelessly stole off of reddit: [caption id="attachment_17288" align="aligncenter" width="638"] 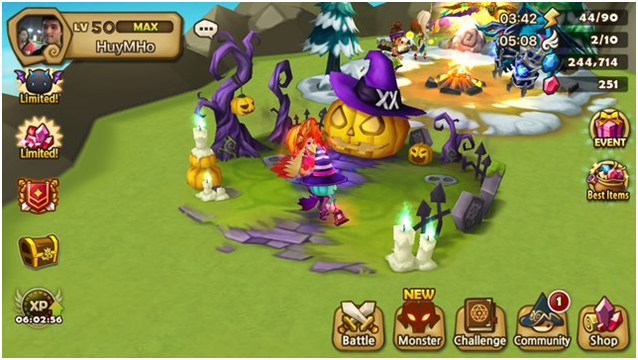 (credit to /u/hi_im_Huy)[/caption] There’s also another event, when you kill all 10,000 monsters. Dusky will give you a new event, where you have to clear either the Arena or the dungeons in the Rift of Worlds. Colleen will send you thank-you gifts when you reach these certain milestones:

Best Way to Clear This Event 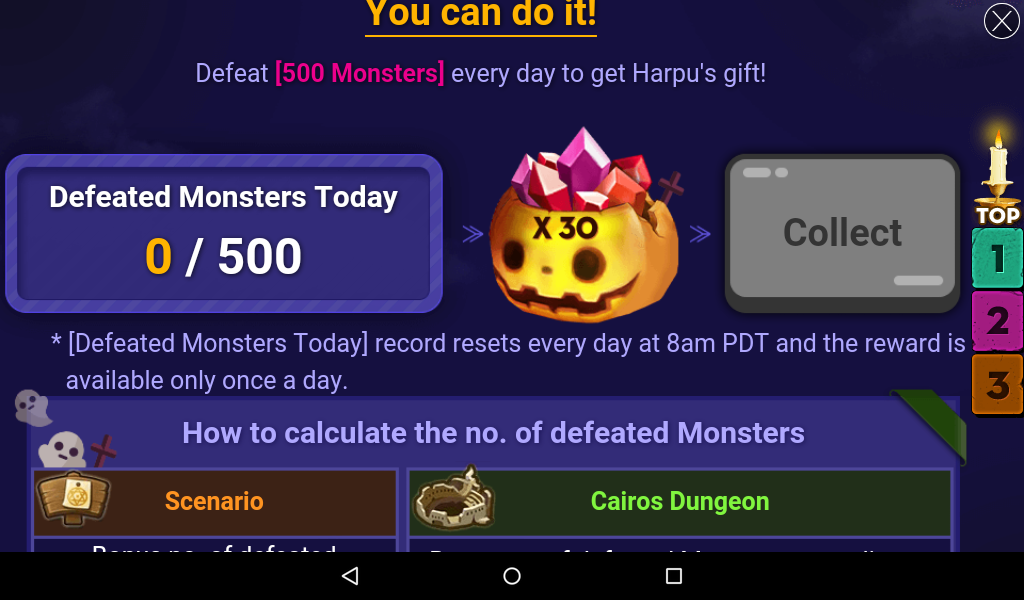 I recommend farming Faimon Volcano (Hell). I actually took the time to count all the monsters in GB10, and it’s 18 monsters, if you count the boss. I don’t know about DB10, but I would recommend doing Faimon Volcano, even if you only get 13 monsters there. You also get some bonus monsters, based on what floor of Cairos Dungeon/what difficulty of the scenario it was. These are the extras you get if you clear a dungeon and what stage you’ll have to be in to get rewards: Cairos Dungeon Scenario This means that if you were to do a run of GB10, instead of having 18 monsters show up in your Defeated Monster Count, you would have 38. However, the extra monsters won’t show up if you don’t clear that stage, so if you fail to beat the GB10 giant at the last stage, you would only get 17 monsters. However, you can also farm scenarios too, but if you’re farming Hell mode, you’ll only get an extra 10 monsters instead of 20. This brings me to my next part of the article… 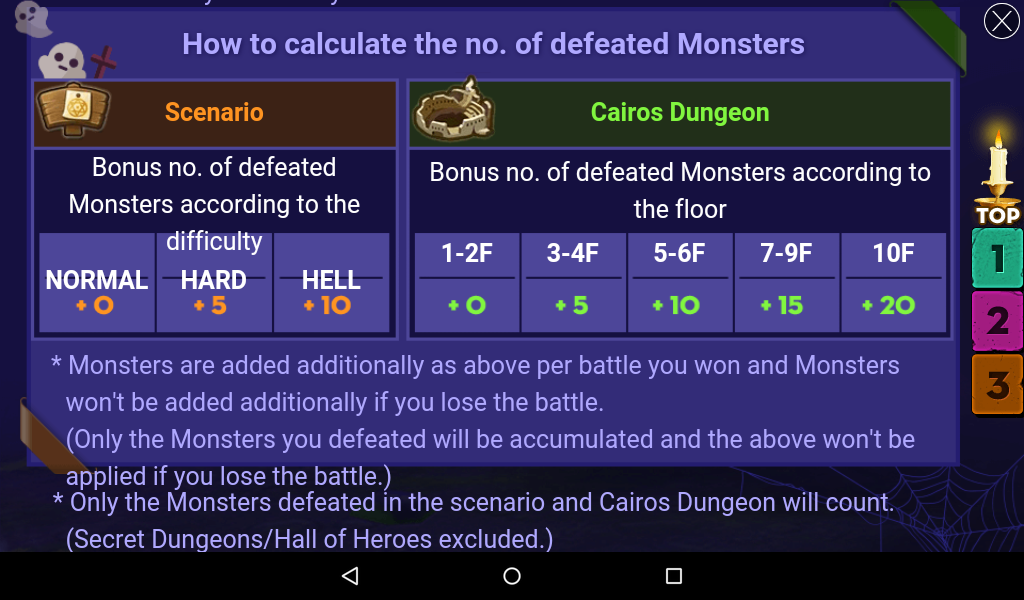 Alright, let’s assume that your GB10 time is exactly 2:00, on the dot, and your Faimon time is 1:00, in order to make this easier. Let’s start with GB10. Faimon Hell (1) If you do Faimon twice, you’ll spend 2 Energy more than 1 run of GB10. However, if you do Faimon twice, that will be the same amount of time as 1 run of GB10, but you’ll get 26 monsters instead of 13 monsters. The bonus for killing monsters will also be the same with two runs of Faimon. In other words, you’ll kill 8 more monsters with two runs of Faimon Volcano instead of one run of GB10. This means that it’s more efficient to farm Faimon for quick and easy monster kills. For those who are interested in the percentages, it costs 25% more Energy for a 44% increase in the monsters you kill if you were to do Faimon, instead of GB10. Of course, your time is going to differ greatly from my examples, and you aren’t going to get exactly the same time every time, but I wanted to keep this as simple as possible. Also remember that this is just my insight on this, and if you want to farm GB10, DB10 or NB10 instead of Faimon farming all day, that’s fine too. That’s my insight on this event. I think it’s a really good one. Unfortunately, like most of these new events, there is a cap as to how much stuff you can grind, but the prizes make up for it, plus, hey, new building!]]>