<![CDATA[On Wednesday, October the 10<sup>th, 2018, the Water Jack-o-Lantern (Chilling) Hall of Heroes was announced. Even though Elsharion recently got released and is more or less a better version of Chilling, I still think he’s decent for DB10 if you don’t have Elsharion yet. Before we begin, Hall of Heroes is a lot like Trial of Ascension, so that means you can use Trial of Ascension strategy and monsters (e.g. attack bar pushbacks, stuns and continuous damage are king). I strongly advise bringing your regular Trial of Ascension team. In my case, I’m using Baretta (L), Frigate, Shaina, Maruna, and Charlotte. Let’s cut the chatter and get on with it!

I mean, yeah, even though Elsharion’s a better version of Chilling, Chilling himself is still decent. For those who don’t know, Elsharion’s passive “Master of Magic Power” means that he’ll steal a beneficial effect from each enemy he attacks and applies it to all of his allies. Chilling is sort of like that, except he only applies the effects to himself and his speed increases based on how many beneficial effects he has on him. This couples pretty well with his second skill, “Song of the Night Wind,” which increases everyone’s speed and critical rate for 3 turns. In other words, Chilling is pretty great in DB10, especially because he steals the dragon’s immunity and is a water element, meaning he has an elemental advantage. In other words, yeah you should definitely farm some copies of this frozen pumpkin. Rune Recommendations: Violent/Swift + Focus/Will; SPD/CRIT DMG%/ATK% 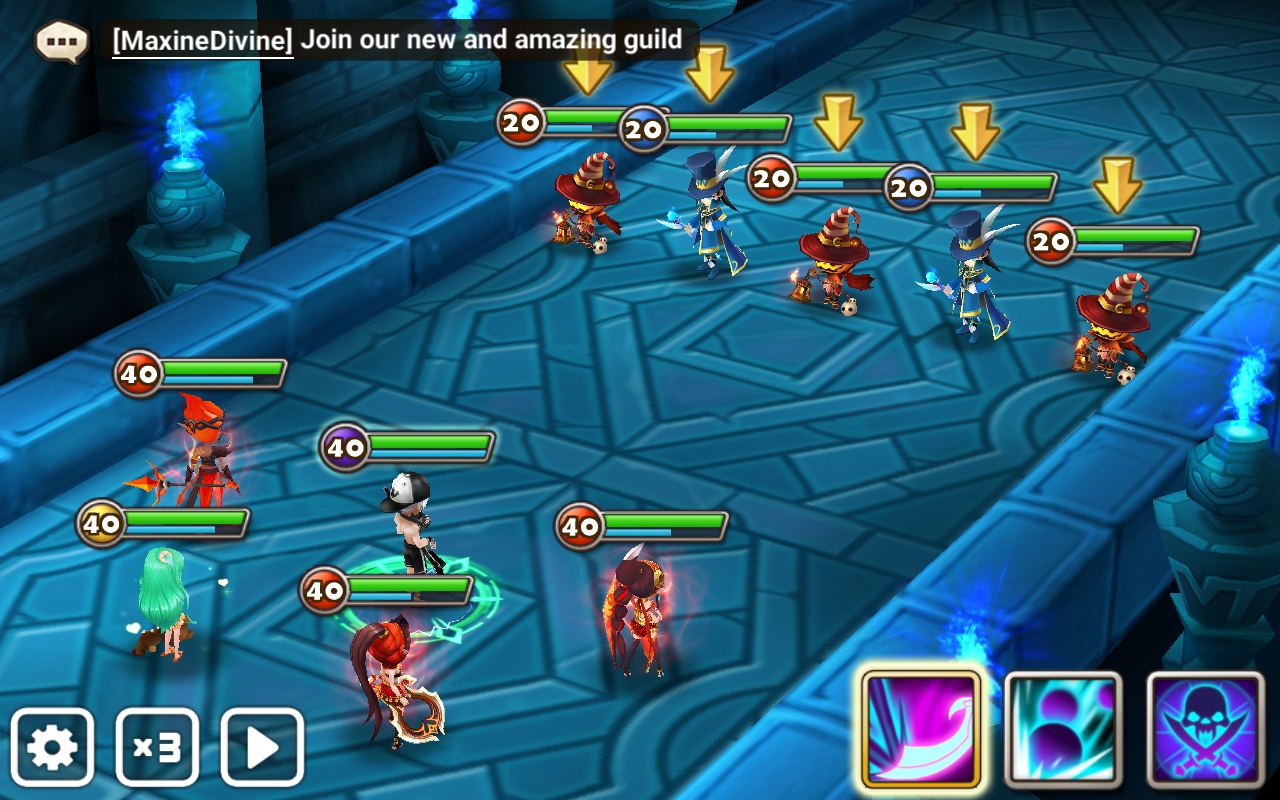 ONLY YOU CAN PREVENT WILD FIRES– Here we have three Smokeys (fire bears – I mean fire Jack-O-Lanterns) and two Luers (water Phantom Thieves). The Threat: Hey, have I ever mentioned that Luer is a budget Galleon? Yeah, that’s right, this guy is the budget version of one of the best monsters in the game. Luer attacks all enemies, decreases their defense  for 2 turns, and also decreases their attack bars by 50%. Anyway, Smokey is who you should really watch out for. His third skill, Fire Starter, attacks all enemies twice with a 50% chance to decrease their attack power and block healing for two turns. That may not sound bad at first, but when you get to the higher stages, this skill will probably end up one-shotting a few of your monsters. It gets worse if Luer attacks, leaving defense break on your mons. The Solution:  I’d definitely go against Luer first. Though Smokey can do damage, Luer brings defense break. That’s reason in itself to get rid of him first. If you’re not lucky enough to be able to evade getting your defense broken, I’d say you should bring a cleanser, such as Velajuel or Veromos. Velajuel would be optimal, so that Smokey can’t land his debuffs, but alas, not everyone has him. Which really sucks. Once both Luers are dead, you can safely focus on killing Smokey. His main disadvantage is that he’s naturally a bit slow, but this is Hall of Heroes, where the stats of the enemies increase drastically as you get past higher floors. I kid you not, I think at one point one of the monsters had 30k base HP. But hey, it’s nothing compared to Trial of Ascension Hard. -PTSD style flashbacks to ToAH80, where 30% of Arnold’s HP was 25k- 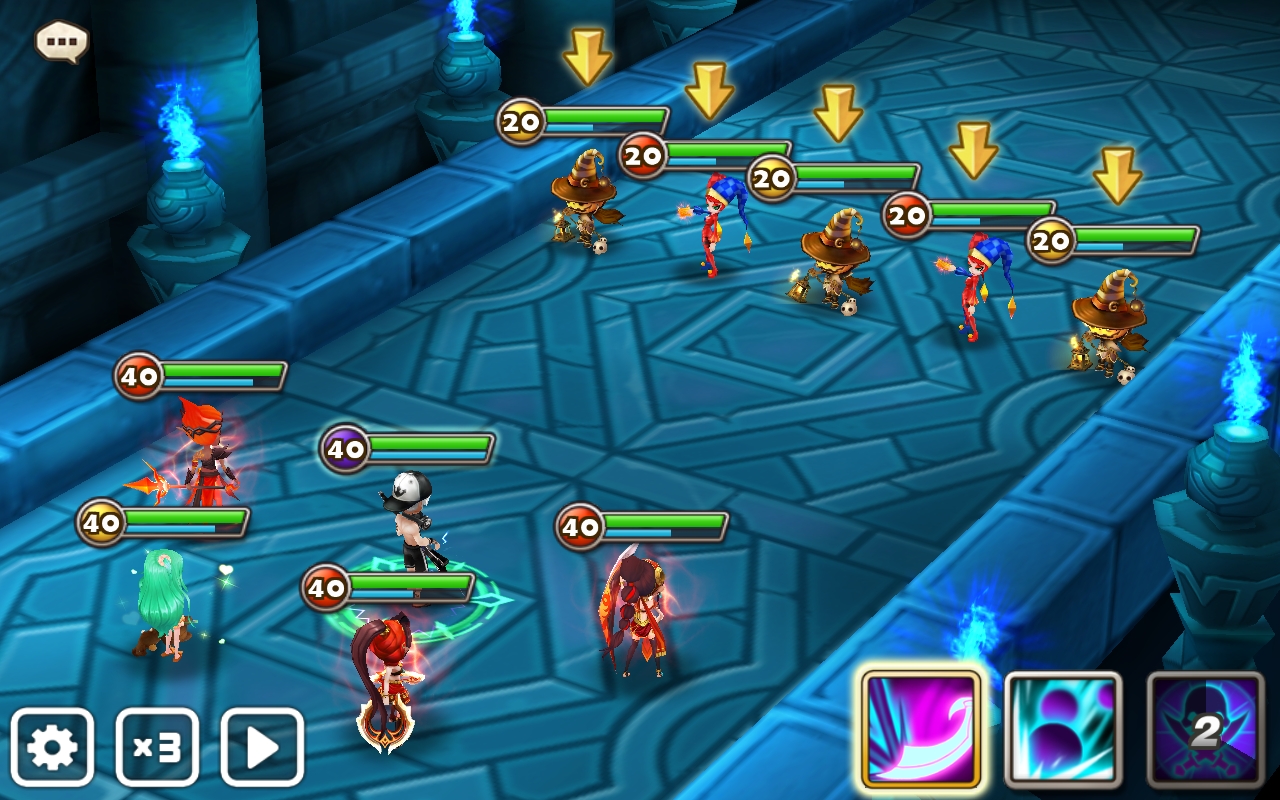 I love how unoriginal the wind Jack-o-Lantern’s name is. They literally just took his element and added a Y to it. Anyway, this stage consists of three Windys (wind Jack-o-Lanterns) and two Claras (fire Pierrets) The Threat: Clara. Definitely Clara. The Pierrets’ main gimmick is that their third skill does something cool whenever they’re at full HP. In this case, Clara’s third skill, Wheel of Fire, will extend the debuffs of enemies by 1 turn per hit at full HP – keep in mind that she already stuns and Wheel of Fire attacks three times. Windy is mildly annoying, however. He only has one skill that outright does damage. He has the second skill Song of the Night Wind, which increases everyone’s speed and critical rate. His passive Shadow of the Moon will let him gain a shield that’s equivalent to 20% of his Max HP for one turn the first time he’s attacked by an enemy. In other words, if Frigate attacks him for the first time that round, Windy will get his shield. The Solution: Stun Windy, and then work on killing Clara. If you want to go for Windy first, then you need to attack both Claras once so that they’re not at full HP anymore. Windy isn’t that big of a damage dealer. What he is is a stall monster that prolongs you clearing the stage. Therefore, you don’t really have to worry too much about him, but if you want, you can go for Windy first just to get him over with. Then, you can kill the Claras. Me, personally, I always kill Clara first and then go for Windy. 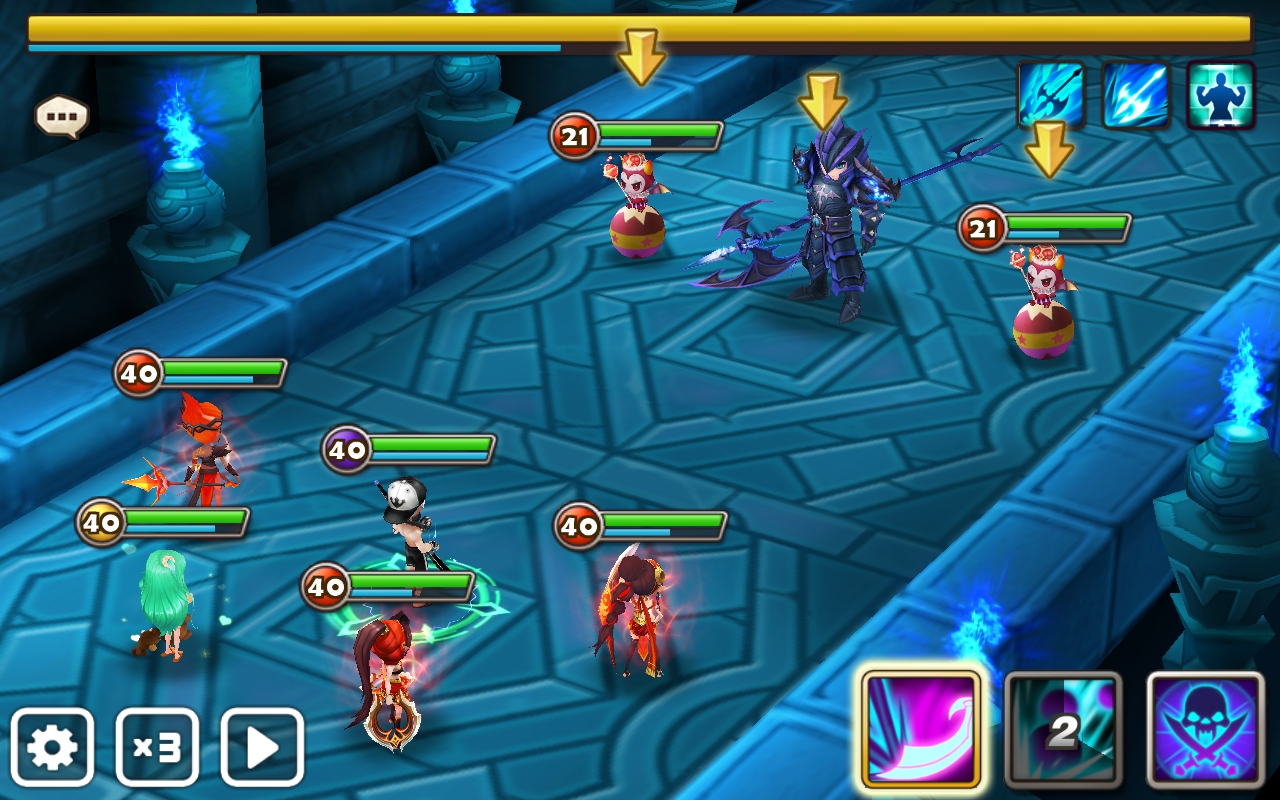 Another day, another miniboss. Here we have a Chow (Water Dragon Knight) and two Dracos (fire Brownie Magicians) The Threat: Oh my god, Chow. He is the first miniboss I can remember from the Hall of Heroes that has the ability to one-shot any of monsters, fire or otherwise. I kid you not, his second skill Justice did 25k damage on my Maruna at floor 5! That’s the kind of damage you would expect from floor 9 or something! Draco is no help, either. His third skill Whistle will cause everyone to gain Immunity for 2 turns, and will also gain a random buff (either attack buff, defense buff or speed buff) for one turn. If the attack buff lands on Chow, you’re pretty much screwed unless you make sure he doesn’t get a turn after that and/or buff strip. The Solution: You need to bring a buff stripper. There are at least four stages that I can think of off the top of my head that would benefit greatly from having someone that steals buffs, like Elsharion. This stage of one of them. If you can’t at the very least make sure Chow never gets a turn, you can also make sure that if Draco uses Whistle, the buffs will get stolen. Chow is going to be the guy that destroys everyone if you’re not careful, so make sure to go after him first or stun/kill Draco before anything else. Thankfully, you don’t have to kill the lackeys during the boss/miniboss stage, so if you just wanna focus on Chow, you can do that. 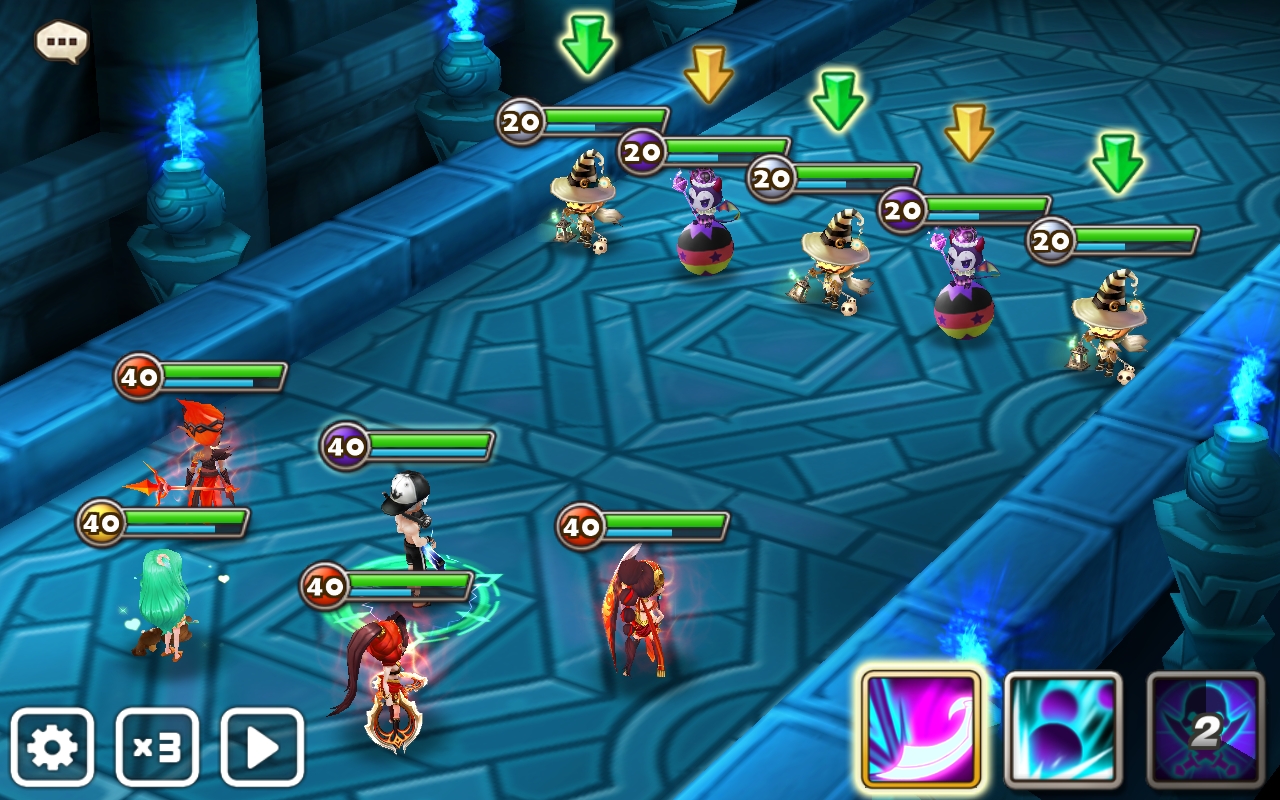 -insert Pokemon joke here- Here, we have three Mistys (light Jack-o-Lanterns) and two Koronas (dark Brownie Magicians) The Threat: I’d probably say Misty. The main reason why I say this is because she – or he, I can’t tell which – cannot have inability effects applied to her. That means Maruna’s stuns, Charlotte’s sleeps, and Verad’s freeze effects are all worthless. Korona, however, is also mildly annoying. I talked about him a few months ago, because he was the August Hall of Heroes. His third skill, “Kindness Gone Wrong,” attacks all enemies, removing both beneficial and harmful effects on them and putting them to sleep. The amount of turns the sleep is relies on the effects that were removed. In other words, if Megan had attack buff, defense buff, speed buff, and a shield and they were all removed, she would be put to sleep for four turns. Keep in mind that buffs and debuffs aren’t naturally applied past three turns. The Solution: Kill Misty first. You don’t want to rely on attack bar reduction, because if you can’t stun her, there’s no guarantee that she won’t get a turn. It’s better to kill her off quickly before she does get a turn. After that, you can work on Korona. I’d be careful if I were you, though – as it turns out, Kindness Gone Wrong (like many other skills( can one-shot your monsters once you’re at the higher floors. The little Brownie boi may not look intimidating at first, but he definitely is. 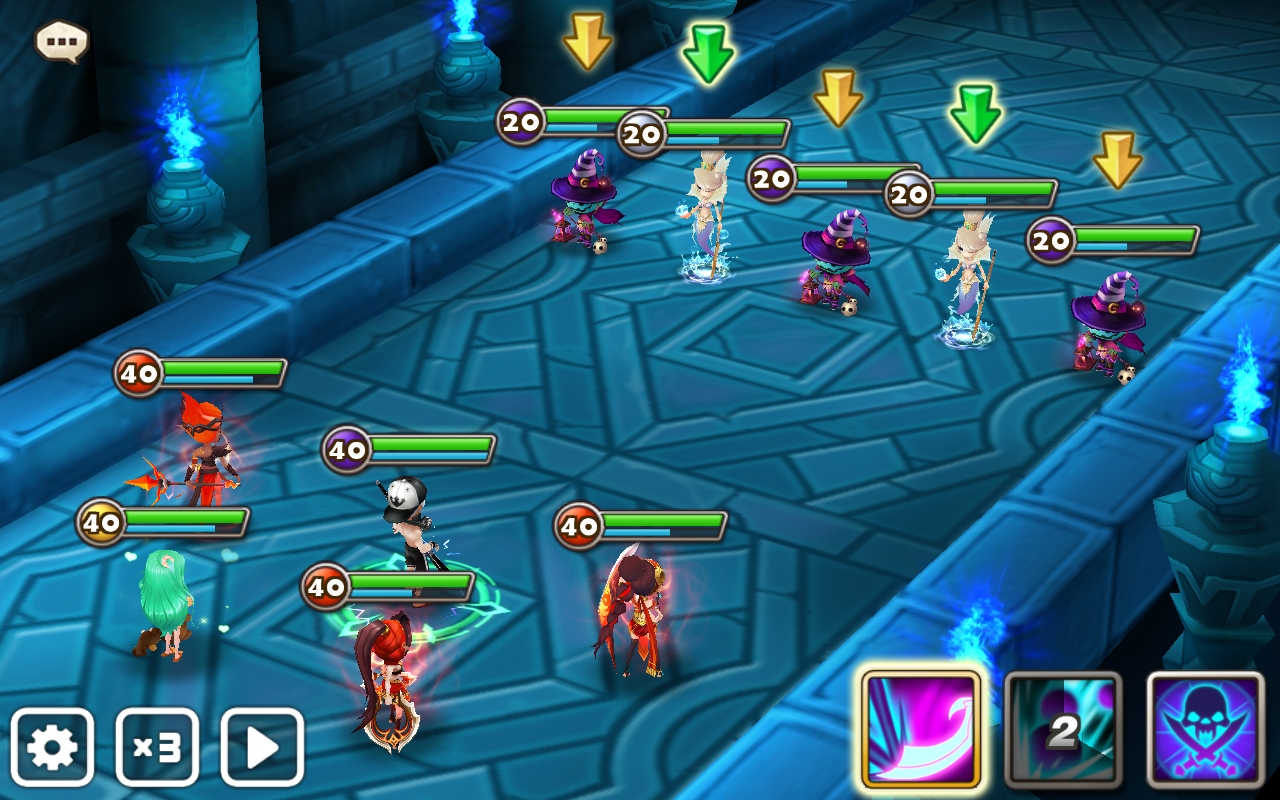 Anyone remember that Halloween event we had last year; where Dusky was bothering Colleen and she just wanted to get home from the party? I actually wrote a one-shot inspired by that; it was called Dead by Dusk. Here, we have three Duskys (dark Jack-o-Lanterns) and two Mollys (light Mermaids). The Threat: Uuuuugh. I hate this stage so much, I swear. Molly is so friggin annoying. Her passive, Glaring Mists, increases the enemy’s chance to land a glancing hit on ally monsters by 20%, and then heals an ally with the lowest HP at the time by 10%. I hate it when I land an attack that should be a Critical Hit, but because Molly’s a jerk it lands as a Glancing Hit. Dusky isn’t that big of a threat, thankfully. His passive, Comfort of the Moon, will generate a shield for 3 turns if he ends his turn without attacking an enemy (e.g. using his second skill, stunned, etc.). His attack power also increases by 50% whenever he has a shield up. The Solution: Kill. Molly. First. I literally cannot stress that enough. I hate Molly so much, oh my god. She keeps friggin’ doing GlaNCING HITS – sorry. Anyway, yeah, kill Molly and then work on Dusky. As long as Dusky never gets a turn, you should be good in general. It’s time to face off against the boss; Chilling himself! Here, the lackeys are going to change, but in this screenshot, it’s Chilling, Windy and Smokey the bear – I mean pumpkin. The Threat: As always, because the lackeys change, the threat changes. In this case, I’d say that Smokey is the biggest threat, next to Chilling. However, if you don’t have any monsters that bring buffs to the team, you should more or less be good as long as no one casts Song of the Night Wind. The Solution: Again, because the lackeys change, the solution changes as well. In this case, I’d kill Smokey first, keep Windy stunned, and then kill Chilling. Thankfully, you don’t have to kill the lackeys anymore to clear the stage. Anyway, this has been the obligatory October Jack-o-Lantern Hall of Heroes. I hope you enjoyed this article and got at least one Chilling! I’m Sara Ann, and I’ll see you in the next article!]]>