<![CDATA[So you’re new to the game and you have to know what to use your resources on. You’ve heard about these strange things called Devilmon, Galleon, R5 and more, but that’s not of your concern at that moment: instead, you’re wondering: “What the heckerdoodles do I use my Mana Crystals for?” Fear not, dear reader, for in under a minute I will explain all the complicated things in a way that you could easily understand! This is loosely based off of those 1:00~ videos that the official Summoner’s War YouTube channel created, called “Summoner’s War Tips and Tricks” A lot of people complained that they weren’t very helpful, so noobish me decided she wanted to help out by writing this little article! Without further ado, here are four things that frequently trip up new players: <h1 style="text-align: center;">Spending Crystals 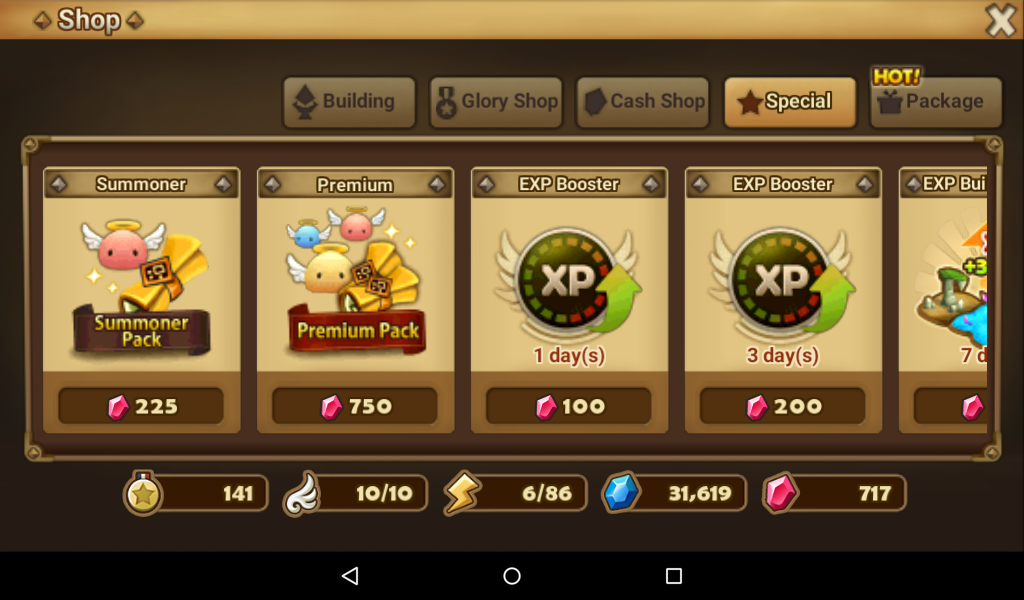 The Mana Crystals – the things that started the Summoner’s War that latest for many years, are some of the best things ever in SW, next to Devilmon, which I’ll touch on later. As mentioned in the opening paragraphs, you’re probably going to ask yourself what to spend your crystals on. When you first look at the shop, you’re going to be blown away by all the cool stuff you see there. It looks very confusing and intimidating at first, because you’re gonna be asking yourself: “What can I get the most bangs for my buck?” I’m going to list everything you can buy in the Cash and Special Shop, and bolding the ones you want to buy the most often while underlining those that should be occasional. I’ll also explain why you want to buy them: Energy Refill – 30 Crystals Arena Wing Refill – 30 Crystals Bundle of Mana (40,000) – 30 Crystals Pile of Mana (154,000) – 100 Crystals Sack of Mana (875,000) – 500 Crystals Box of Mana (2,100,000) – 1,000 Crystals Summoner Pack (3 Mystical Scrolls, 30,000 Mana, Random Angelmon) – 225 Crystals Premium Pack (11 Mystical Scrolls, 100,000 Mana, 1 Angelmon per Attribute (not including light and dark)) – 750 Crystals 1-Day EXP Booster (Doubles EXP) – 100 Crystals 3-Day EXP Booster (Doubles EXP) – 200 Crystals EXP Building Booster (Triples EXP in buildings for a week) – 250 Crystals Attribute Dungeon Opening (Open an elemental dungeon of your choice for 3 hours) – 200 Crystals [Element] Secret Dungeon (Open a random Secret Dungeon for one hour) – 100 Crystals Dimensional Rift Crystals (Crystals needed to enter Dimensional Rifts; cannot be used until you clear scenarios) – 100 Crystals for 3, 20 purchases a day Essence of Magic Pack (5 High Magic Essences, 15 MID Magic Essences, 30 Low Magic Essences) – 250 Crystals Symbol of Harmony (50, can be purchased 10 times a week) – 180 Crystals Symbol of Transcendence (50, can be purchased 10 times a week) – 180 Crystals Symbol of Chaos (50, can be purchased 10 times a week) – 180 Crystals Rune Pieces (50, can be purchased 15 times a week) – 180 Crystals Nickname Change (Change your username) – 300 Crystals “Wow!” You think to yourself. “So many things to choose from, but only a few are worth it?” Don’t worry – I’ll start with the bolded items; the items that are a must. Energy Refill – This won’t be really helpful until your energy count hits around 80, but once it does, you will buying these so often. In this game, farming is everything, and with Energy Refills, you’ll be farming for a ton of runes! Arena Refill – Same as Energy Refill, except you’ll be farming for Glory Points. 1-Day EXP Booster – You’ve just six-starred Veromos! Congrats! You’ll be farming Faimon Volcano nonstop, and once he hits level 30, it’ll be painfully tedious to finally max him out. Don’t worry, though! With an EXP booster, it’ll be only half as difficult! If you use a Faimon farmer (e.g. Lapis) Veromos will earn 7,800 EXP with the booster. If you take a friend’s rep and successfully clear it, then he’ll earn 15,600 EXP with the booster! Attribute Dungeon Opening – Alright, this one is pretty expensive. This is usually for players who regularly get around 700 crystals every month (around midgame if you can regularly clear Trial of Ascension) but it’s worth it for those times when you have something that needs to be awakened, costs a lot of essences, and its elemental dungeon won’t open for another three or so days. Premium Pack – This should only be used if you’re about to have a big summoning session (e.g. birthday or Christmas summons, when you’ve been saving up for a while) because the crystals can be used to farm for runes. People say all the time: “You can have the best monsters known to man, but if you don’t have the runes for them, they’re useless.”  [Element] Secret Dungeon – Light, dark, fire, water or wind, when there’s an elemental dungeon open the Secret Dungeon portal is open, too. For 100 crystals you can open a random secret dungeon of that element. For example, if there’s a water elemental dungeon open, you can get one from the list of secret dungeons available for that element. While it’s random, it’s better than farming for a particular dungeon and without even a guarantee of getting a dungeon in the first place.

Rainbows and Angels and Devils, Oh My

Rainbowmon, Angelmon, and Devilmon – it’s easy to confuse the terms when you’re new. Thankfully, I’m here to explain the mechanics of each of these monsters for you and what not to use them in!

Rainbowmon – These guys come in already awakened and maxed out. Their star count in the wild can be two, three or four stars. Because they’re already maxed out, their use is for evolving stuff. For example, you would evolve four three-starred Rainbowmon in order to five-star a monster, whether they’re naturally four-stars, an awakened three star or have been evolved to four stars. What not to use Rainbowmon for: Don’t get your hopes up about using Rainbowmon in battle; you can’t take them to battle with you. This also means you shouldn’t put runes on your Rainbowmon. Don’t use Rainbowmon to level up monsters. That task would be better suited for…

Angelmon – These guys are the bringer of experience and ways to level up monsters fast! There are five Angelmon available, one for each element. There are also King Angelmon (also one for each element), which bring a lot more experience than regular Angelmon. What not to use Angelmon for: Don’t put them in battle or rune them up. You can’t use them in battle. Don’t try and evolve Angelmon to use them in replacement of Rainbowmon; they stay at one stars and one star only. Don’t leave them unawakened; when you awaken them, you’ll get double the experience if you feed an awakened Angelmon to a monster of the same element (e.g. an awakened fire Angelmon fed to a fire monster)

Devilmon – The most valuable resource in the game; Devilmon, when fed to a monster, will level up a random skill of theirs. Skillups are important, as they will increase the power on that particular skill. For example, a Sigmarus with Frozen Orb at level 5 will deal far more damage than a Sigmarus with his Frozen Orb at level 1. What not to use Devilmon for: Like with Rainbowmon and Angelmon, don’t put runes on your Devilmon, as you can’t take them into battle. Do not feed Devilmon to monsters under four stars. Even then, there are only a few four-star monsters that deserve Devilmon poured into them. A few examples include:

Wake Up the Potential! 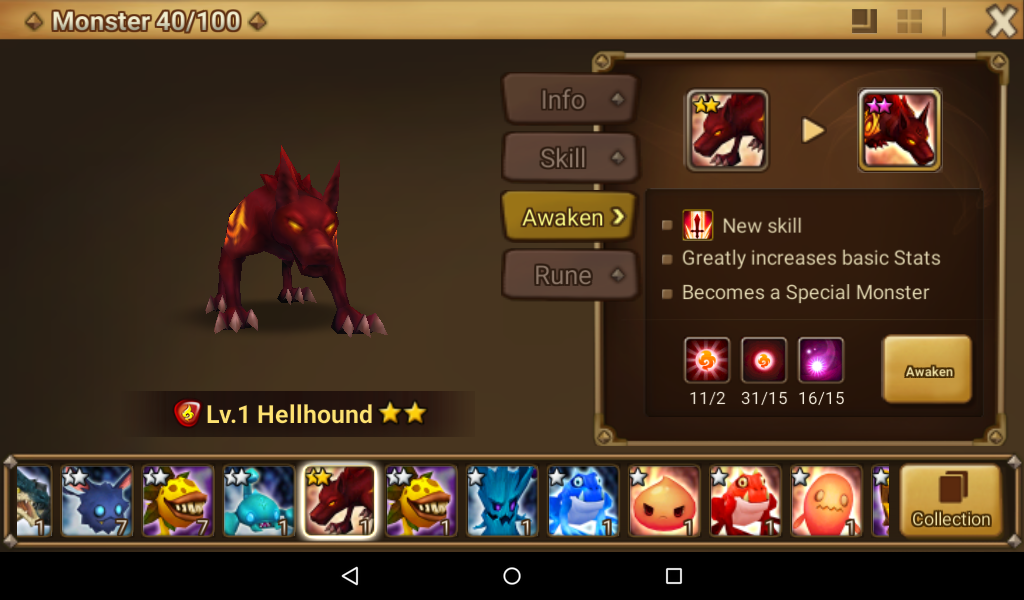 Awakening monsters will bring out some of their potential, which will be necessary once you’re past early-game. There are many choices as to who to awaken first (which I will elaborate in another article), but here are some quick, easy monsters you could awaken to bring out their potential and be useful early-game and why:

Shannon – So you’ve gone through Reina’s Missions and received your Shannon. Unfortunately, you’ve fed her away. Don’t worry, Shannon’s easy to acquire! She’s the wind Pixie; a two-star monster, and therefore, it’s also easy to awaken her! Upon her awakening, she’ll gain Pep Talk; a skill that increases your party’s attack power and defense for three turns!

Belladeon – So you’ve asked around, gotten a few adds into the light Inugami secret dungeon, and now you have Belladeon! Congratulations on getting the three-star monster that every newbie needs to have! Awaken Belladeon for the stats increase; which makes it harder to kill her!

Konamiya – You don’t have Veromos. That’s okay; you can use Konamiya (the water Garuda) for the time being. You have to awaken him, though, for his third skill, Peace. The skill will remove all harmful effects from all allies and heal them all by 15%.

Darion – The +1 of your first GB10 team; Darion is the light Vagabond, a three-star monster, unlike all of his brothers (with the exception of Jubelle, the dark Vagabond). Like Belladeon, awakening him will be easy, and awakening him will give him a major stats increase.

Bernard – Gotta go fast! Like Shannon, you can get Bernard (the wind Griffon) awakened from Reina’s missions, but if you’ve fed him away by accident, that’s okay; awakening him is also easy! His awakening bonus will unlock his leader skill, which increases the attack power of all wind monsters by 30%, as long as he’s leader in the team!

Feed Who to Whom?

Alright, you’ve amassed a collection of monsters; it’s small but it’s impressive when you’re a newbie. You’re running out of space, and you want to know who to feed to get more space. Here are some general rules of thumb: That’s the end of One Minute Tips and Tricks! I hope you enjoyed this article, because I certainly did! Always check the internet before you feed anything away or do anything else until you get the hang of things. I’m Sara Ann, and I’ll see you in the next article!]]>