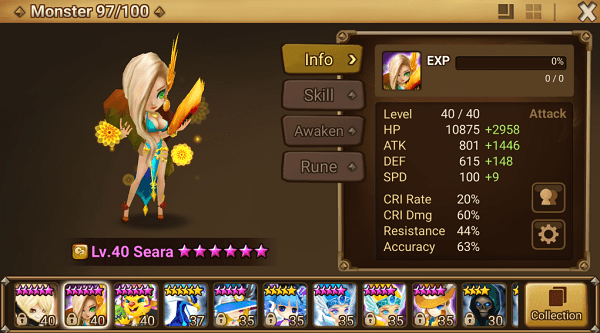 <![CDATA[Seara is one of the most desired Natural 5 star monsters in game. She is the only monster that detonates all bombs applied on opponents team instantly. As an added bonus, her skill selection while on defense or in auto mode is one of the best in game, making her a great defensive monster. <h3>Natural Star Grade: 5★

Seara is on just about everyone’s wish list in regards to natural five star monsters. She deals incredible damage which ignores defense, has the highest universal speed leader in game, and is a key ingredient to complete a bomb oriented offense. Seara can be used in almost all aspects of the game. She can be used by herself or with a bomb team in ToAH, she can be used in raid as a damage dealer, and in almost all aspects of PvP. She shines most in PvP. Using her on defense with an Orion and Theo or similar fast nuker creates an rng oriented defense that can catch opponents off guard. The downside of defenses like this is that they are YOLO style defenses, meaning if they don’t win fast, they will most likely lose to a battle of attrition.

Seara is the cornerstone behind Bomb team AO. The hardest to get, yet arguably most effective AO in game is:

Seara(L)/Liebli/Tiana/Galleon or 2nd Bomber Liebli is interchangeable with Malaka or any other bomber of course, and although not as effective, Orion can be substituted for Tiana If building a team with a stripper:

Seara(L)/Malaka/Buff Stripper/Megan This setup has a lot more rng checks but can be very efficient. When using Seara on GWD, a few of the common comps are: In regards to arena defense, some of the more common setups are: Those are just a few of the many possible comps that incorporate Seara. Take your time testing comps to find the one that works best for you.