Awakened Bonus: Increases Attack Speed by 15 Skill 1: Snatch: Attacks the enemy with razor-sharp claws. Damage increases accordingly to your Attack Speed. Skill 2: Special Assault: Inflicts damage proportional to the Enemy’s MAX HP. Consumes 10% of your HP. (Reusable in 4 turn(s)) Skill 3: Backlash: Sends out a gust of wind that has a 50% chance to decrease the Attack Gauge of all enemies by 30% and decrease their Attack Speed for 2 turns. (Reusable in 5 turn(s))

Spectra is the fastest monster in the game at 126 speed awakened.  He is a good member against big bosses like Water Guardian, Dragons B10, ToA final bosses Lilith and Lyrith. 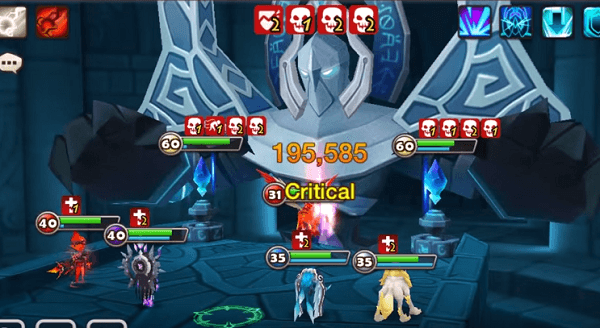 For a utility build, I suggest Swift/Focus(Spd/Hp%/Hp% or Acc%).  This will allow your Spectra to be fast and apply debuffs on the first turn of battle. That is his main job 99% of the time. Important Substats: Spd, Hp%, Acc%, Crit R%, Crit D% Having Crit R% and Crit D% increases the damage on his first and second skill.

For ToA, Spectra excels at slowing down enemies and making them lose turns. This isn’t as useful in lower stages. But for hard stages 50+ and higher, he can be a life saver. He can allow you to steal a turn from the enemy countless times. Team him up with his wind buddy Bernard or Verdehile and you will have a field day against most of the floors you encounter. Plus, he can also deal tonnes of damage to the final boss due to the max hp scaling damage from his second skill.

Spectra is not suitable for Giants B10 but he is a good member for Dragons B10. Above is a run done by a fellow Summoner and he does very well with it. Only 1 fail in 40 runs is very good odds. Plus the run time is quick too. He isn’t useful in Necropolis due to speed being negated, so do not bring him to Necropolis against the Lich King.

You can use Spectra in offense against fast monsters. However, due to the  ATB reduction and attack speed slow only occuring 50% of the time, Bernard is the better choice. You can also use him against tank teams that don’t have immunity and you will get many many turns before their tanks can move. This is a niche pick though.

All in all, Spectra is a solid monster and is worth keeping for Dragons B10 and also ToA floor 100 and other tough floors. Please don’t over look him even if you have Hwa or Verdehile!]]>