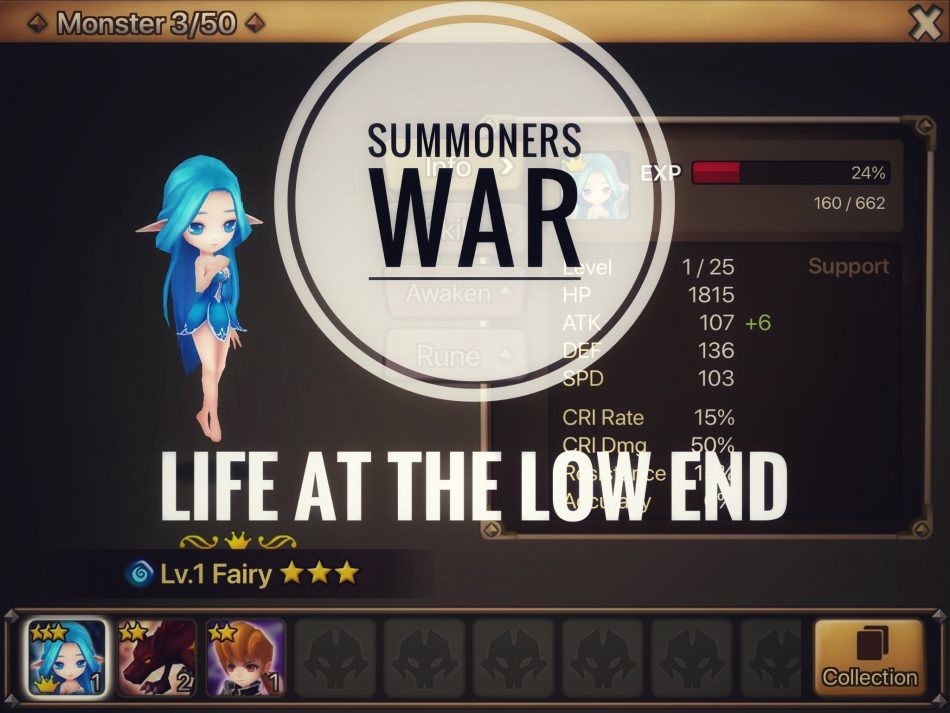 Don’t Be That Guy. (Ladies, This Applies To You Too.)

{Please note that I am using the term “guy” in a gender-neutral way.) You know the person I am talking about, right? The one who yells in ALL CAPS when trying to get the attention of someone who just discovered a Secret Dungeon they need. The one who says colorful and unkind things when someone in chat opens their 3rd Nat 5 in a row. The one who claims that the game is completely rigged, and is only “Pay-To-Win“. Yeah, don’t be that “guy”. What if I told you that there is a way that you can actually develop a winning team using nothing more than the 13 “freebie” monsters that the game hands you? What if I mentioned that you do not have to spend the next month of your life doing nothing but putting together components for Veromos in order to actually “start” the game? What if I pointed out that there is a way to not be completely at the mercy of the hateful RNG when trying to build a decent set of runes for your starter team? You might not be “that guy” anymore, right? You could actually get some enjoyment out of the game while developing your starter team while waiting to see what the Unknown Scrolls and Mystical Scrolls have in store for you. Wouldn’t that be nice? Welcome to the L@TLE method for early success in Summoners War. Note: if you are an existing player, don’t do anything dramatic like blowing away your existing account or creating an alt account. To give this system a whirl, just open your profile and switch servers. That way you can safely experiment on a blank canvas. If you’ve been running on Global, I recommend switching to the Europe server, as it will make communication with other players a little more straightforward in a day or two. Let’s get started, shall we? 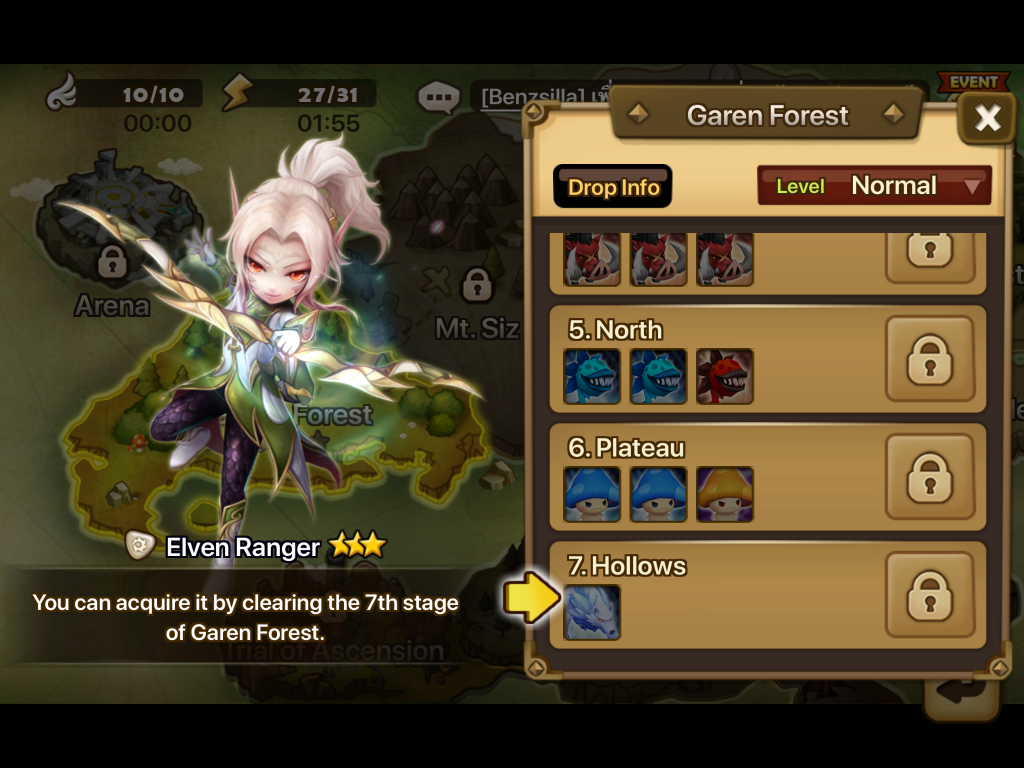 The game does an admirable job of guiding you through the process of summoning creatures, adding buildings to your island, upgrades, etc. It then unceremoniously dumps you at Zone 2 of Garen Forest without any further instructions. In fact, if you haven’t been informed to watch the feed of messages dropping down the left side of your screen (which you haven’t), you may not even know that you are supposed to be finishing off Garen Forest as your next objective. A quick note about the constant feed of messages on your left: pay attention to them. Not only are these your “signposts” on how to progress through the game, they are also directly linked to your challenges and achievements. Why are these important, you ask? Because they are the most consistent source of extra XP in the game. You’ll be watching the counters next to the “Challenges” label along the bottom of the screen rolling up like a mileage meter on a cross-country road trip. Ignore it. No, seriously, pay no attention to it at all at this point. You are going to need those bonuses for other things sooner than you think. Now, following Ellia’s directions, return to the Forest. Ellia will spend a little time directing you to equip a second rune on our Water Fairy, then will drop the subject like a hot potato until the beginning of the next zone, Mt. Siz. Don’t let her carelessness damage your early development. While in Garen Forest, you need to NOT rush through all 6 zones of the forest, just to be eaten by the giant wolf in Zone 7. Instead, spend some extra time collecting a few rune sets for your troops. Put Energy runes in slots 1 and 2 for your Water Fairy, 3 and 4 for your Hellhound, and make sure you have an Energy rune in every single slot for your Wind Vagabond. Yup, all 6 of ‘em. Pay no attention at all to the number of stars or the bonuses built into the rune sets. You are after the +15% health bonus to your Fairy and Hellhound, and the +45% health bonus and offensive bonus to your Wind Vagabond. (His attacks are enhanced by his Max HP.) At Level 3, you will be able to turn on Auto-play and stop directing traffic through each battle. Do this. Auto-battle is what allows you to grind through Summoners War without losing your mind. Also, you will probably notice something odd when Auto-battle is turned on. Your Water Fairy will instantly heal the Hellhound whenever he is scratched… but will frequently just let the Wind Vagabond die: Some blame poor AI for this. I personally think that the Fairy and the Vagabond just went through a nasty break-up. By the time you finally get everyone set up with their runes and arrive at the giant Inugami at zone 7 your party will be somewhere in the neighborhood of level 4/6/4 or 5/7/5. Given the health bonuses from the Energy sets, this is plenty strong enough to take out the giant, furry guardian of Garen Forest.

You will now be forced to sit through a 3-way dialog between your sidekick Ellia, a purple-haired refugee from Hogwarts, and Durand. I know that there is a story in here somewhere (A relic? And some bad guys? Or something?), but I, quite frankly, have never paid much attention to it. You will then be released to your own recognizance and can take care of a few things around the island. First, open your inbox. The Elven Ranger will be waiting for you there along with your first daily log-in bonus. Open both messages, then close your mailbox. I wish I could tell you that the Elven Ranger is a tremendous powerhouse of a character, a massive upgrade to your forces. Afraid not. He is useful later on as a PvP character, however, so we will set him up on island defense in a moment. Durand will unlock the Arena, then direct you to go defeat some guy named “Gready.” Open the Arena, load up a team of your Fairy, Hellhound, Vagabond, and newly acquired Elf, then hit the Auto-play button. A few moments later it will all be over. As you leave the Arena, however, you will be directed to set up a Defense for your island. Remove your current team members from the screen… And set up your Elven Ranger as your sole defender instead: 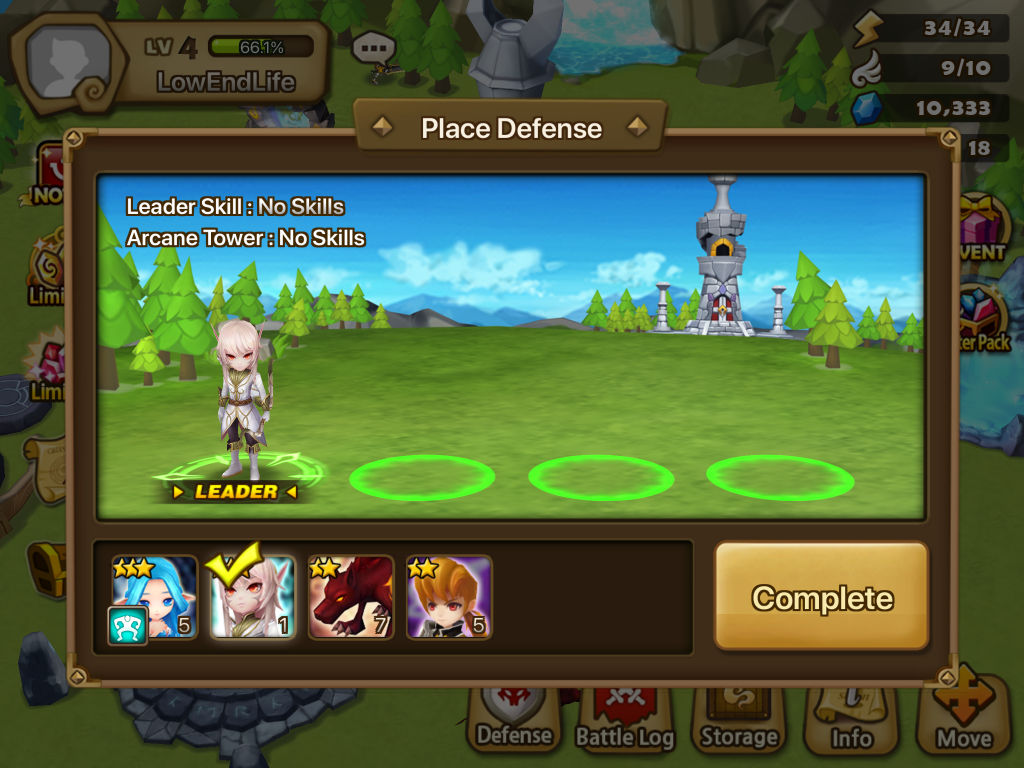 Why? Because PvP in the Arena will be a part of your daily routine, and it is VERY easy to wind up getting pitted against very powerful foes thanks to the auto-wins you will be enjoying against the AI-controlled “Rivals.” So, leave a very poor Defense up (for now…), and you will be getting creamed regularly whenever anyone assaults your island. This, in turn, will lower your Arena rating, placing you in a lower “weight class” during your daily scraps with other players. It feels like tanking. (In the “losing on purpose” sense, not the MMO sense.) It IS tanking, really. But it is an efficient way of gaining your daily Glory points, which you are going to be needing very soon. Lastly, set up your single Arcane Tower (for the tasty Challenge rewards), and head back to your mailbox one last time to receive the Light Garuda from Durand. Here, at last, is something you can sink your teeth into: an Area-of-Effect healer with a single-target buff and an emergency resurrection spell. He will be a major part of your forces for quite a while to come. Total elapsed time? Somewhere between half an hour and an hour.Take a break, get a drink, and congratulate yourself on your successful (re-)introduction to Summoners War. Join us next time here on L@TLE as we discuss early rune set-up for long-term success. Ciao! Hawkwind]]>