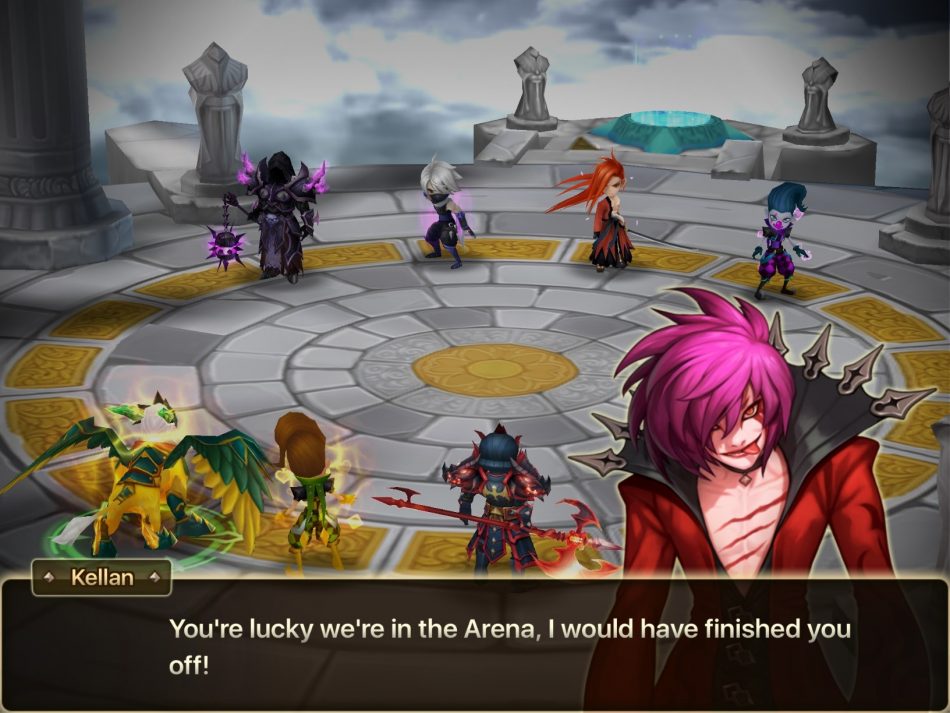 <![CDATA[Yo! It’s time for Herdanky (pssst that’s me) to let out a few words. For better or for worse. Who knows! Now let’s get started! Try and recall how and when you started this game. You had no idea you would become addicted to it right? So addicted that you’d eventually find yourself reading THIS article on THIS fan site for the game? To the players who have become dedicated to playing Summoners War and will continue playing, allow me to walk you down “tutorial lane”. A blast from all our pasts if you will. Let us remember the early days of playing Summoners War together! <h3>Pre-InGame First off…how did you discover this little mobile game? The odds of finding it were most likely not in your favor, but hey, YOU found it. Did you randomly stumble on one of their Youtube ads and said: “this ain’t half bad…I’ll give it a try”? Did you find it while browsing through the Appstore (iOS users) or Playstore (Android users), maybe on a recommended section? Or maybe a friend mentioned it to you by saying something like “You’ll definitely be wasting a ton of time, but you might have fun doing so. Go ahead. Try it :D”? However way we found it is irrelevant at this point, considering most players reading this article are pretty into playing Summoners War, but to all the players who are into it, you have to admit….we got caught pretty good hehe. Hook. Line. And sinker. Does anyone regret being caught? I for one do not…at least I don’t think so. In my case, Summoners War was found through the recommended section of another game I reliably played, and ever since I found it, I never played that other game ever again…oh well! Summoners War for the win! Now upon discovering Summoners War, we were given the brief rundown of what this game is about. 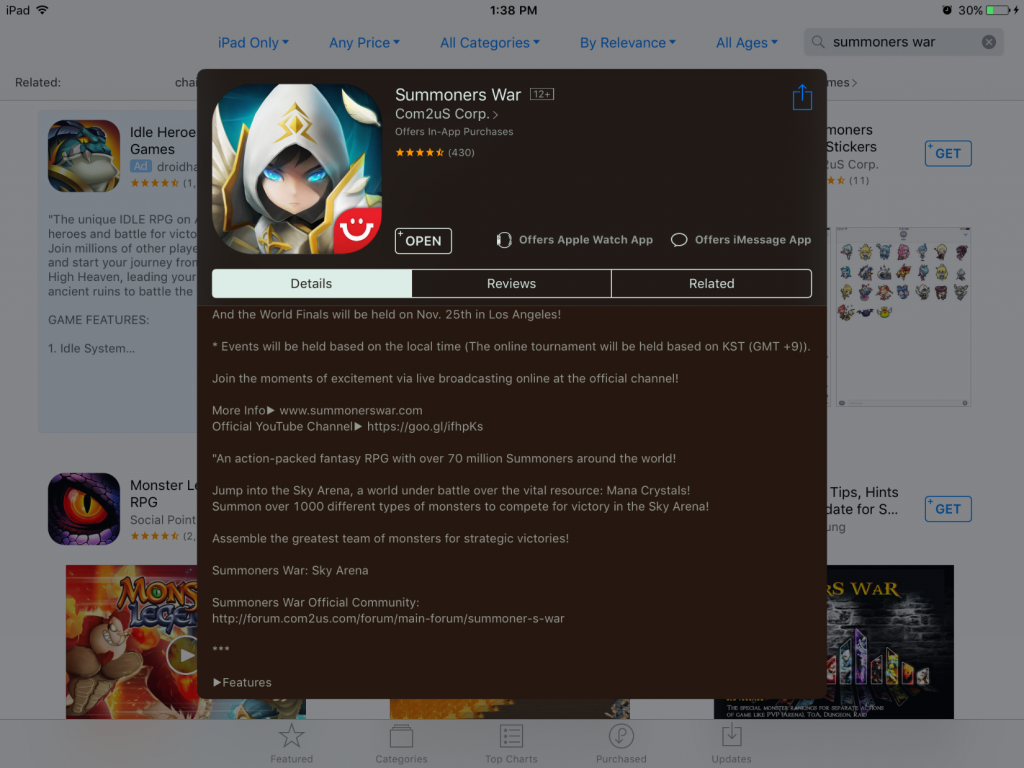 “An ACTION-PACKED fantasy RPG with 70 million summoners around the world!” “JUMP into the Sky Arena, a world under battle over the vital resource. Mana Crystals! “Summon over 1000 different types of monsters to compete for VICTORY in the Sky Arena!” “Assemble the greatest team of monsters for strategic victories!” Blah blah blah. Who here just looked at the pretty (well designed…sorry words escape me sometimes) pictures and went for it based on that? MY HAND IS RAISED UP HIGH to represent all “easy to please” layers like me who start new games based on how they look, haha! Can you blame us? Are these not quality designs??? 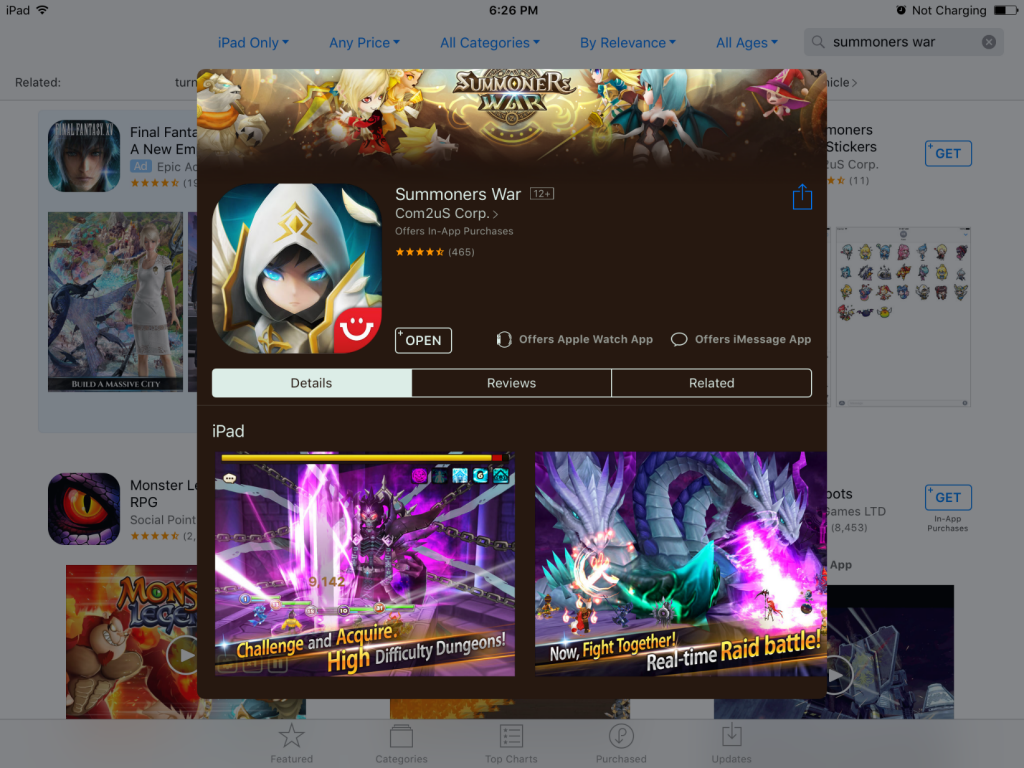 After confirming we ARE playing the game, the download button is hit and our Summoners War journey has almost begun…is what I’d like to say, but damn! I remember the download taking its sweet time. On the game’s description, the size for the game is 36 MB…pffft NOPE. That’s for the pre-patch download. The game’s size, as of today, is 1.83 GB. Yeesh! I remember it being around the size of 86 MB, and as it grew, I was forced to delete other apps because my phone was not having all of Summoners War’s byte fatness within it. No worries though, I got a new device with much more space. Time has changed though hasn’t it…but I digress. Once we got through the downloads, we were forced to identify ourselves with distinct in-game names.

Now that’s a quality name right there! Appeals to many players, I’m sure. After we’ve appropriately named ourselves, we’re thrust into the game! 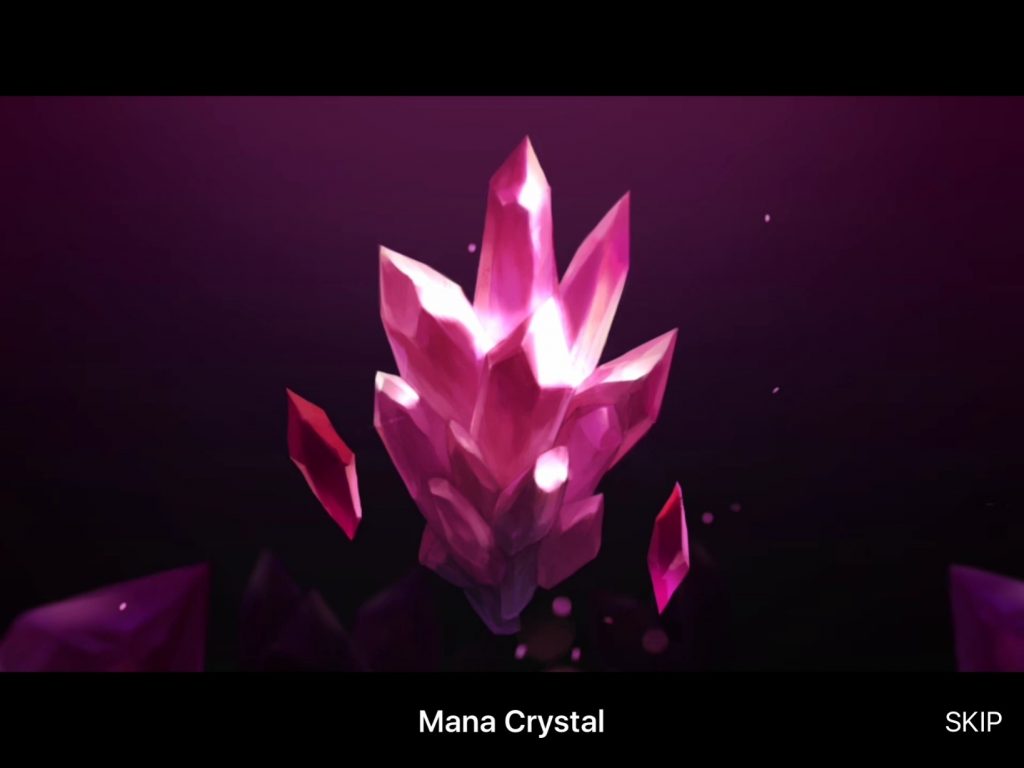 Ah…scratch that last sentence. Correction. We’re thrust into its lore! Now the lore is quite the fascinating read becauSKIP! So Ellia, the only non-unit…unit we can’t fight with, was the one who introduced us to the tutorial. 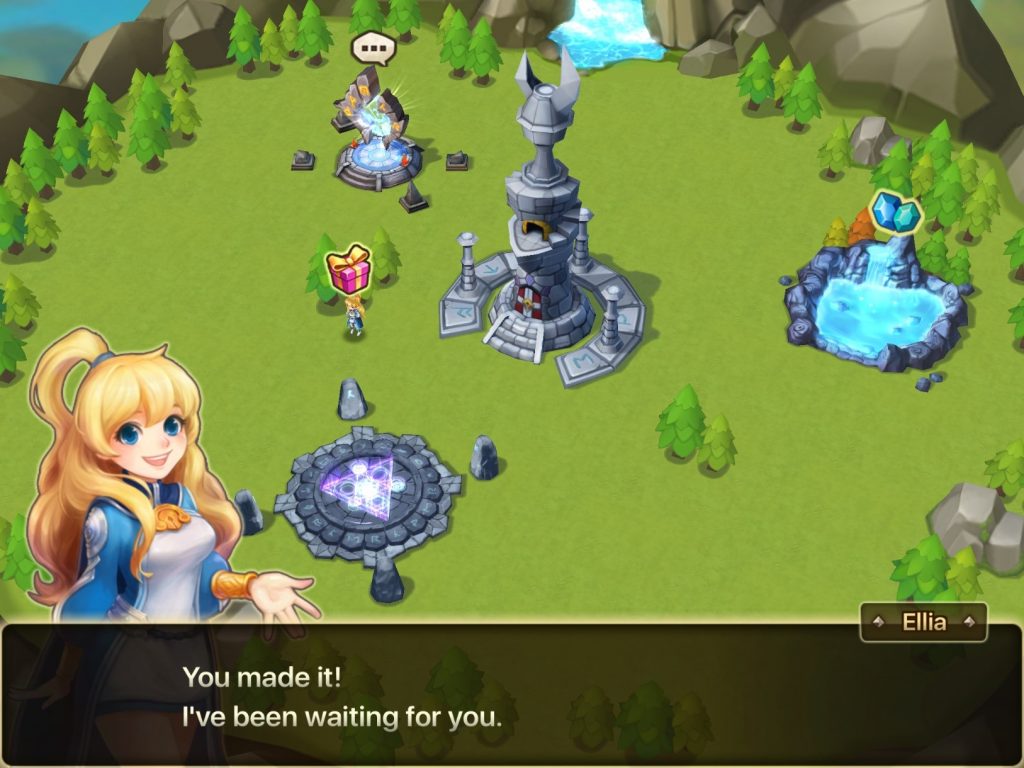 Tapping through all her and Durand’s dialogue, the tutorial consists of the following things. 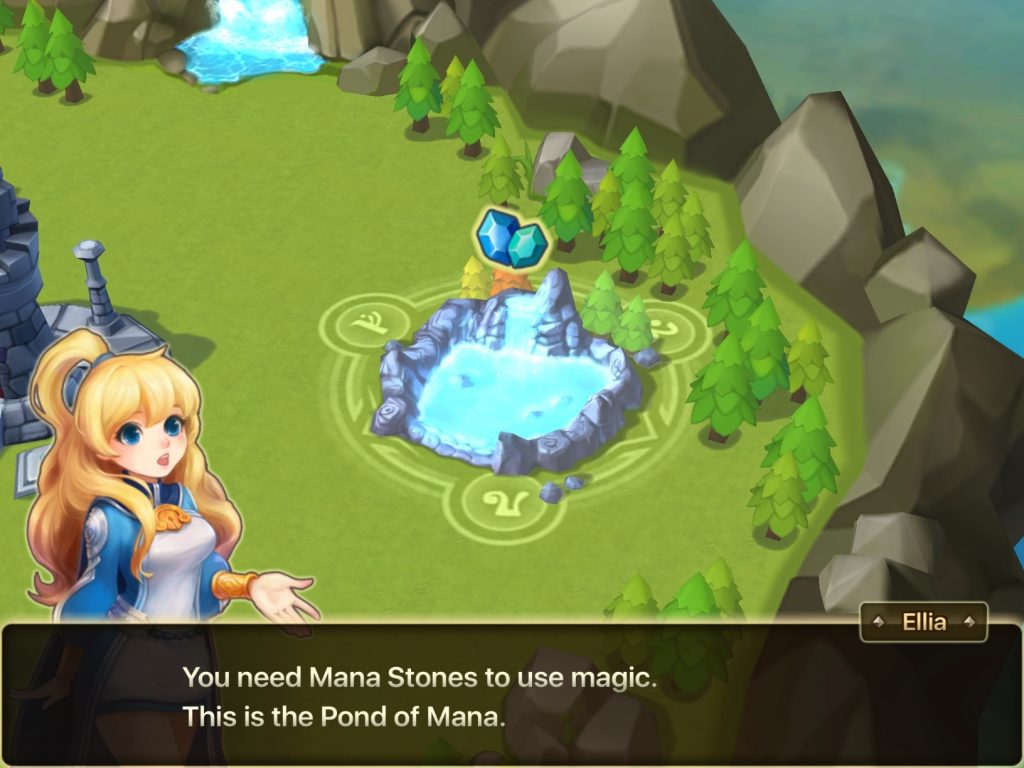 Pond of Mana – One of the buildings we all probably tap before we do anything on our account. Why? Because of free mana of course! Who doesn’t like free stuff? Summonhenge – THE SOURCE of addiction. They started us off simple, using an unknown scroll, AND LUCKY US, we got a fire hellhound as our first attack unit. 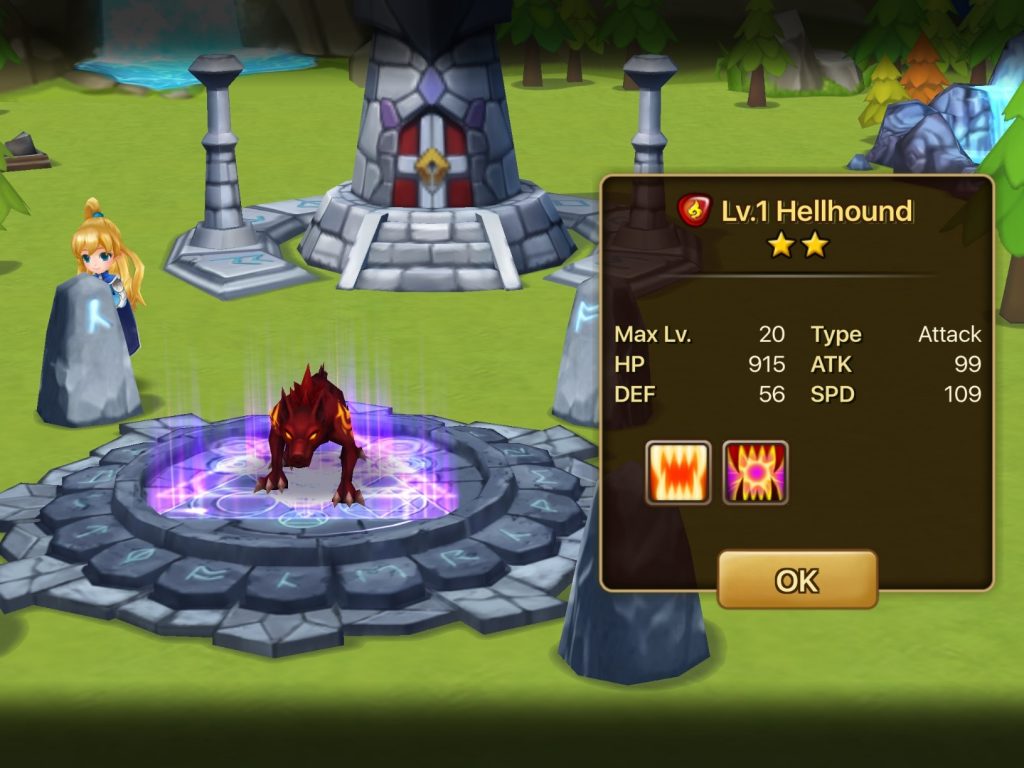 They then forced us to use 75 gems to summon our first 3-star, support, healer, cleanser, unit with a leader skill and single target cc. 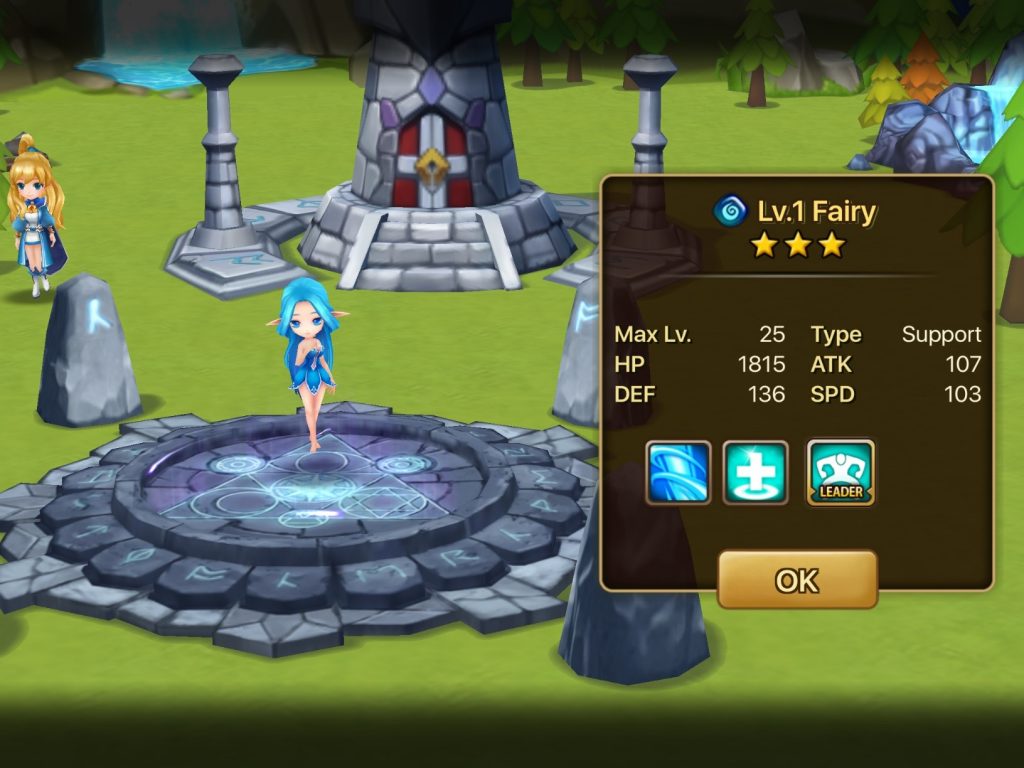 Was she worth 75 gems at the time? Probably…but you won’t hear it from because I cringe at using gem for summons. Gateway –          Does anyone ever use the Gateway to battle, lol? Anyways, after “flawlessly” summoning

(whatever that means), we’re lead to our first Scenario run in the Outskirts of Garen Forest so we can practice slaughtering innocent boars. 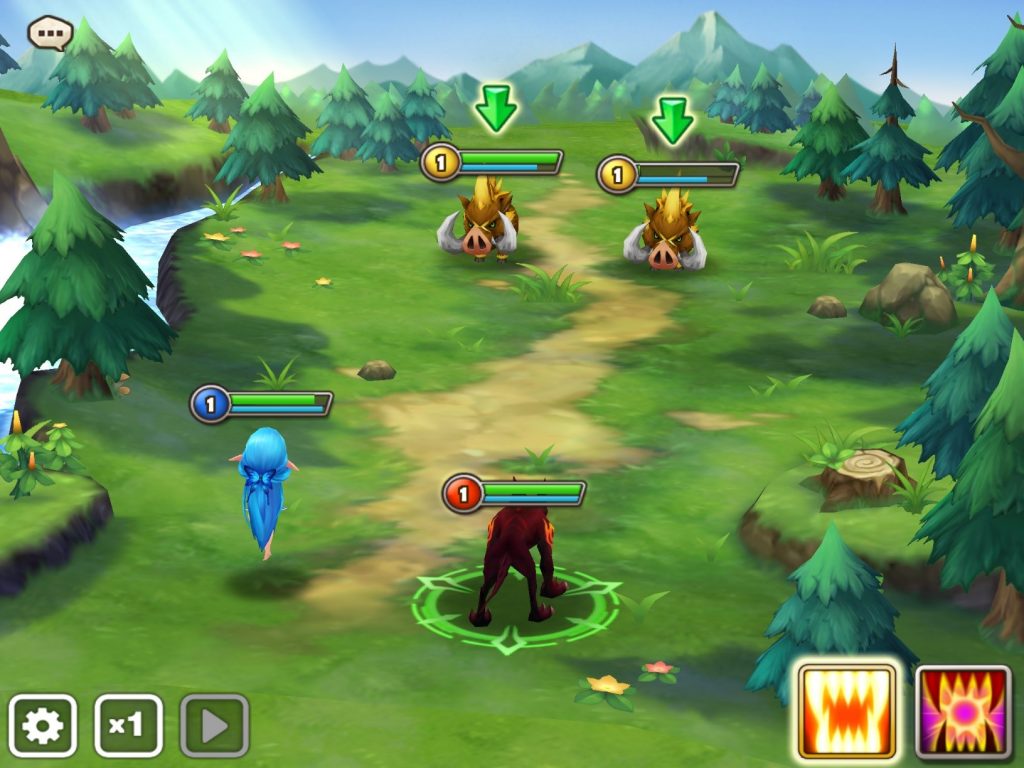 We were proudly successful, WITHOUT autoing or on x3 speed (They now integrate changing the speed in the tutorial, but it wasn’t always like that. We long-time players had to ENDURE x1 speed until a certain level. Good times…). From that run though, we earned an unknown scroll and were forced to summon our first wind hp tank…completely forgot about this dude…sup o/ 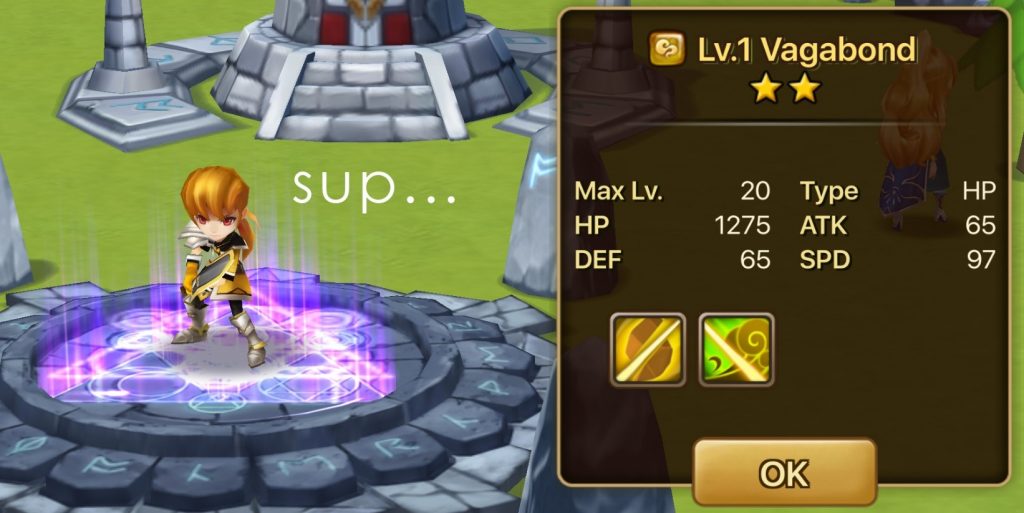 *The attribute relationships display used to be taught within this run, but I guess they show it later on now, or maybe you just figure it out? I don’t know, so there you go. 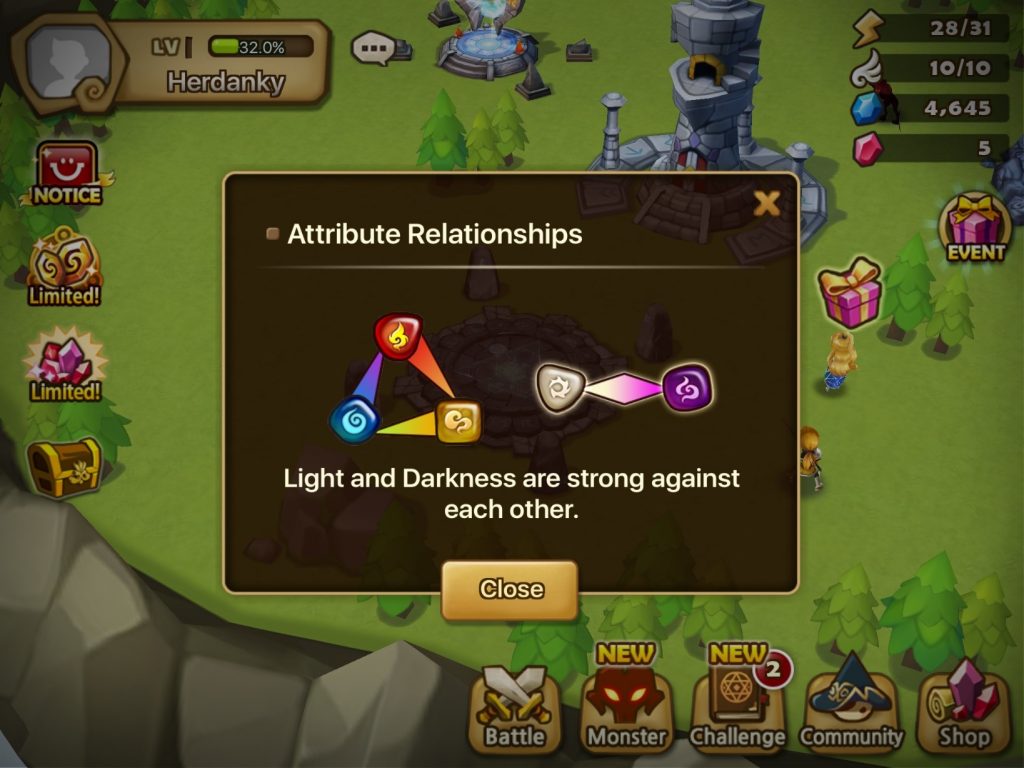 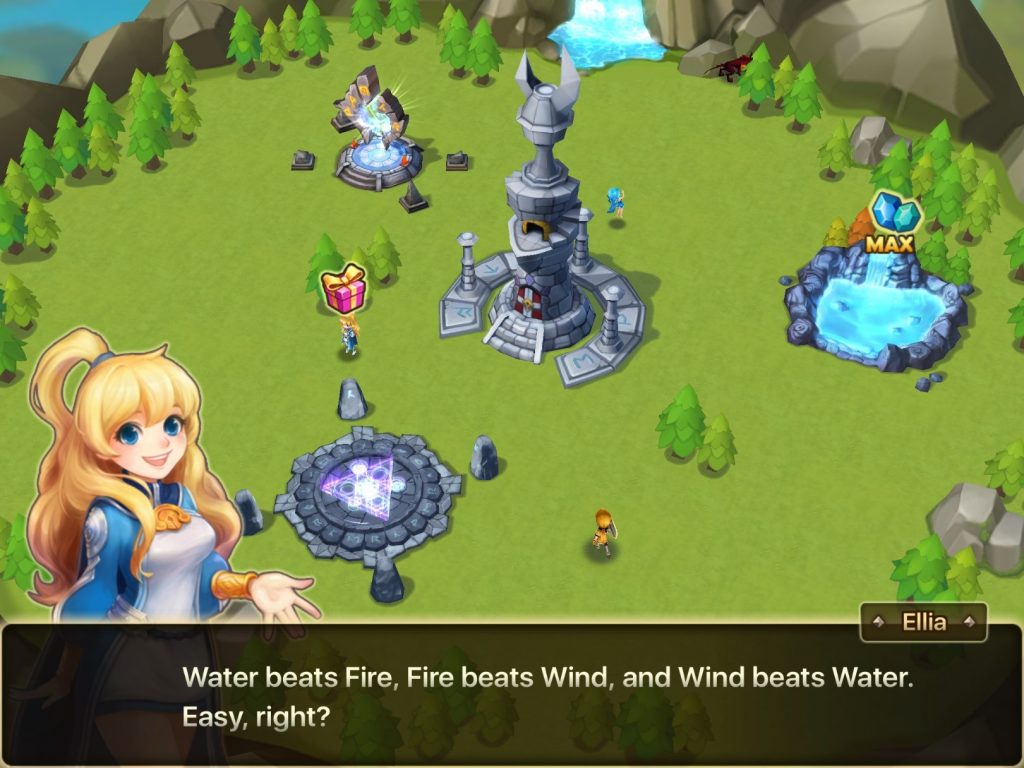 Easy, right? Next, they force us to engrave and powerup our first crappy rune. 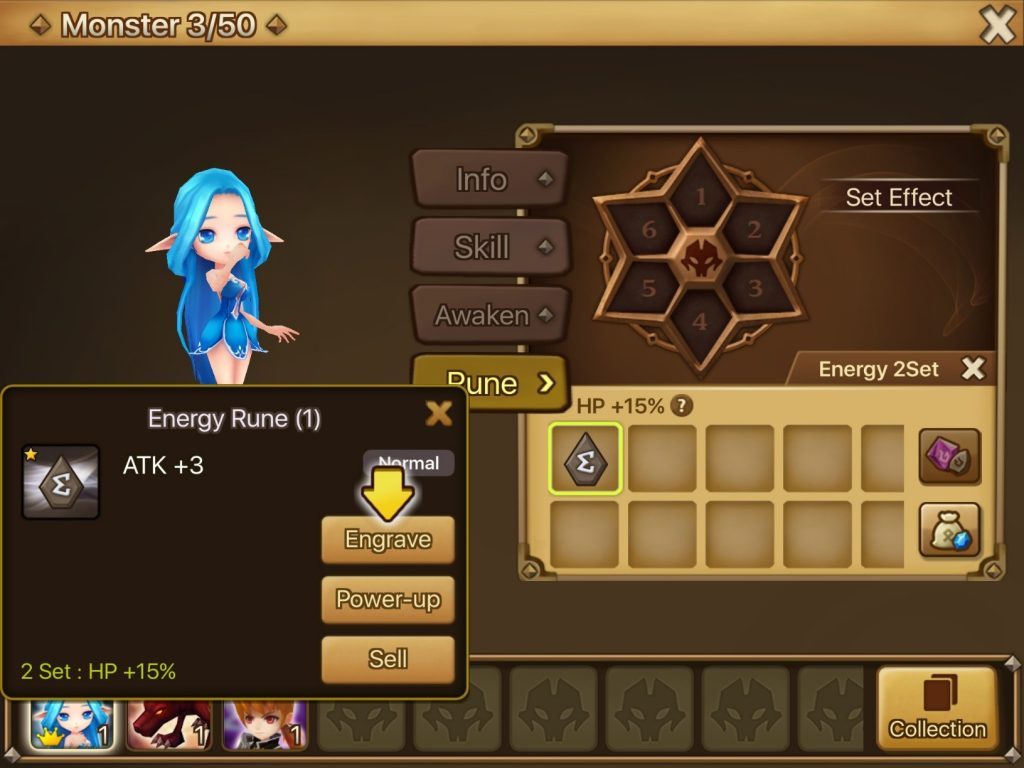 Then, we were forced to buy a powerup circle and feed this poor little mushroom to our hellhound…alive. 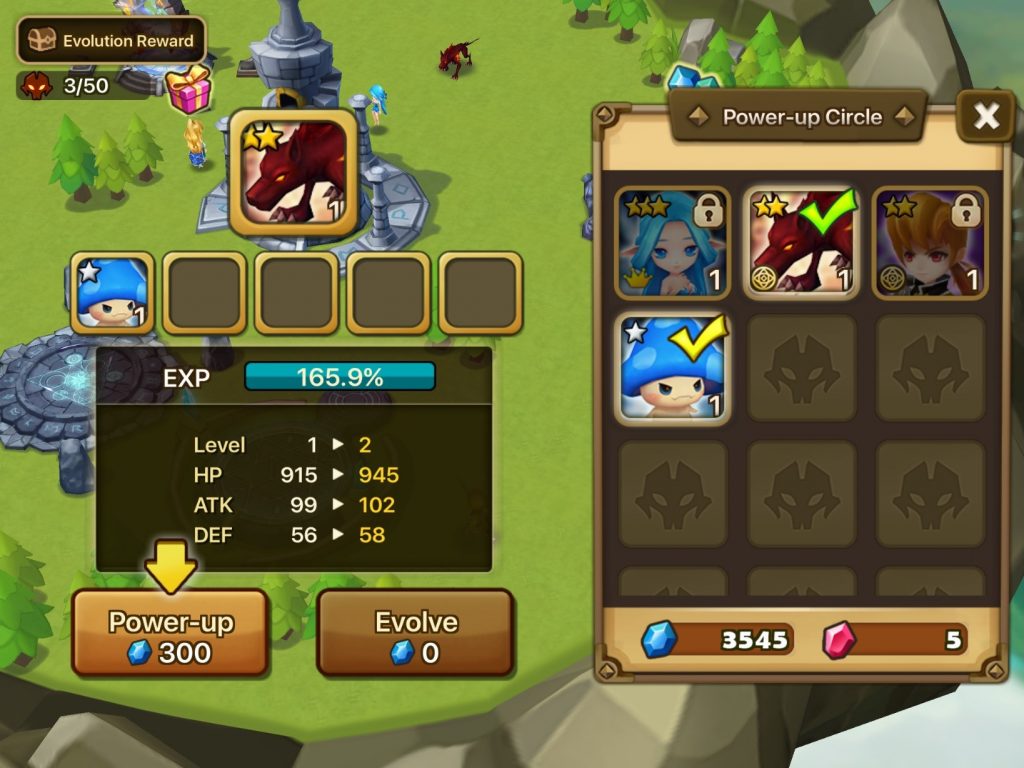 It was a bittersweet moment. The little mushroom was thoroughly digested BUT, our hellhound gained one whole level. Worth! Durand then sends a message out of the blue, telling us that he has already registered us for the arena…WITHOUT our knowledge or consent. PLUS, we couldn’t even fight in the arena at that moment. What was the point of registering for us??? 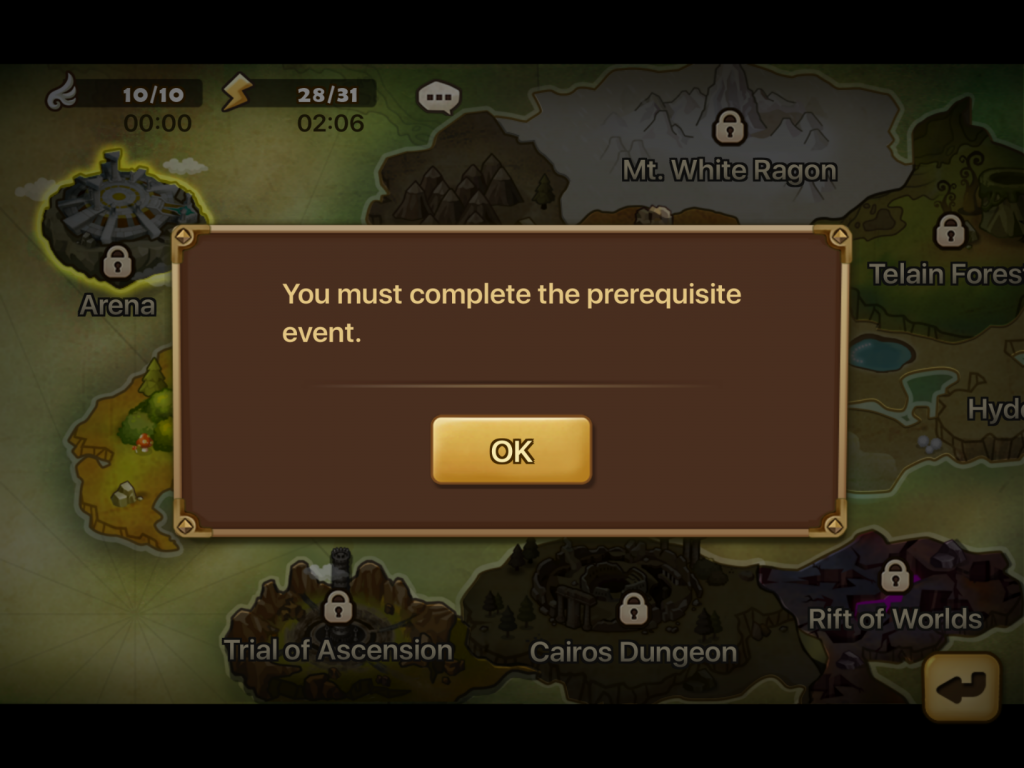 Speaking of arena! Remember these guys? 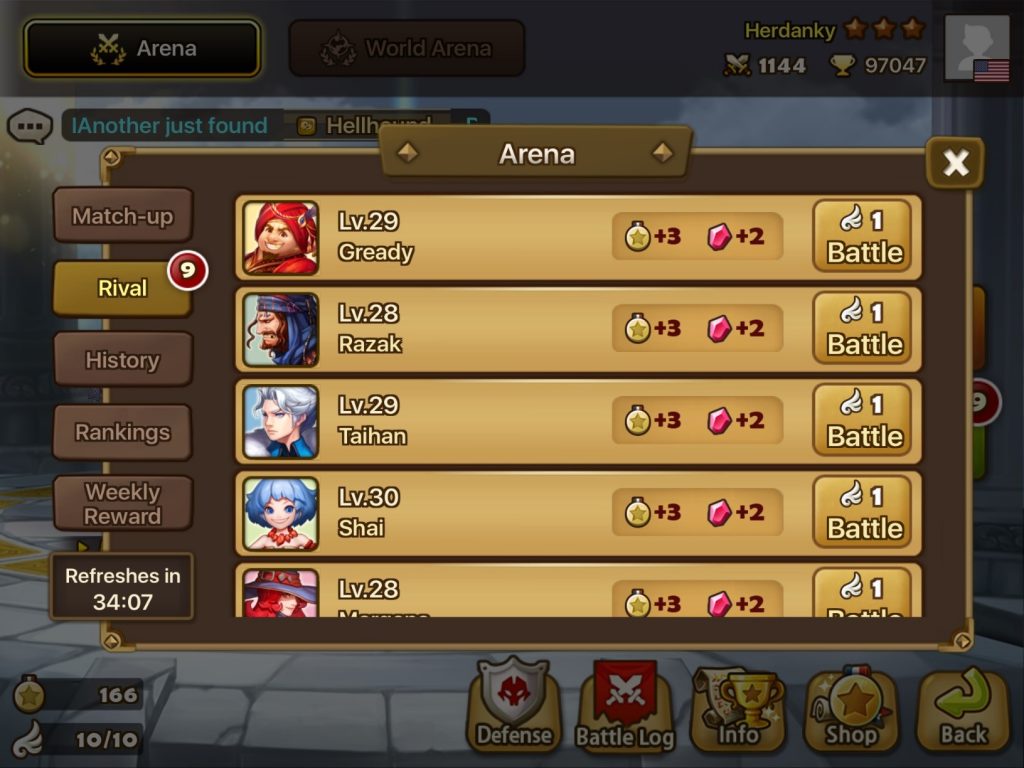 The so-called Rivals? They were actually a threat back then and most of them were SUCH a-holes when you lost. ESPECIALLY, this dude! Now they’re our bit**es 0u0. 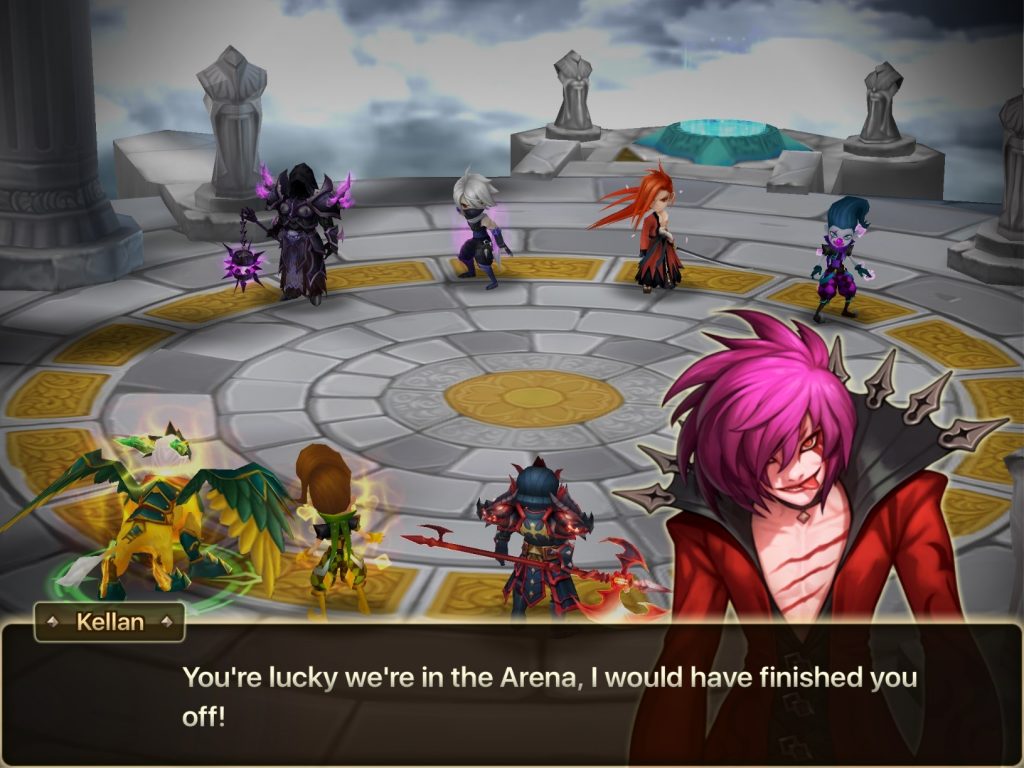 OK, GOODBYE EVERYONE! runs away]]>