Welcome to the Beginner’s Beginner Guide, which will attempt to explain the game in a way that is easily accessible to new players. It won’t be as detailed as some guides as far as numbers, but that is intentional as throwing charts at new players can be confusing.

In this first installment, we are going to look at monsters themselves and explain the different parts that make up a monster. 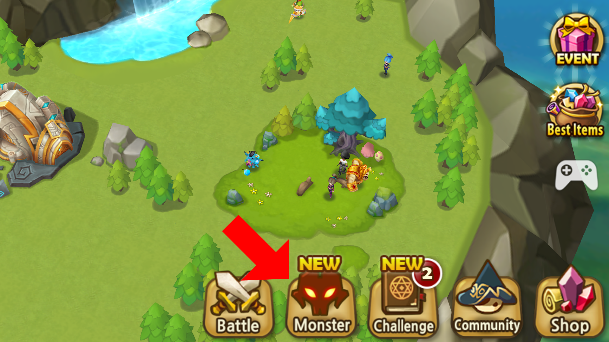 From your base screen, if you tap the monster button, it will take you to your monster screen. There are two organizing buttons on the top right. The first has your monsters in a row on the bottom and their information and model above.

From your base screen, if you tap the monster button, it will take you to your monster screen. There are two organizing buttons on the top right. The first has your monsters in a row on the bottom and their information and model above.

The second option provides a larger list of monsters to the left and the info to the right with no model. This version can be sorted by a few categories: 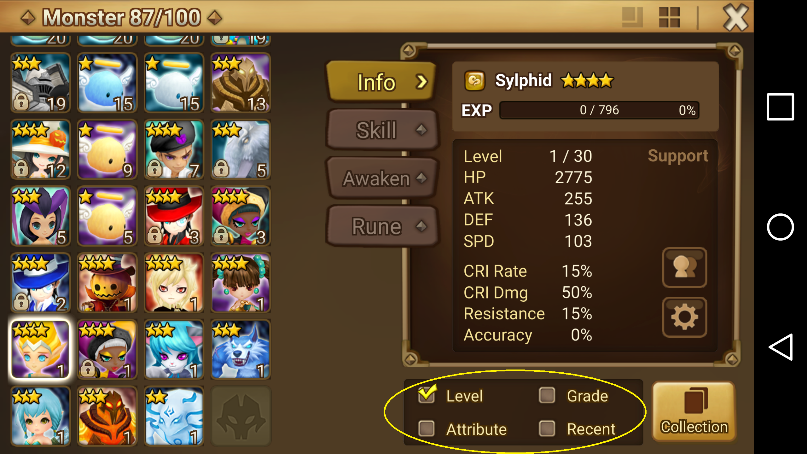 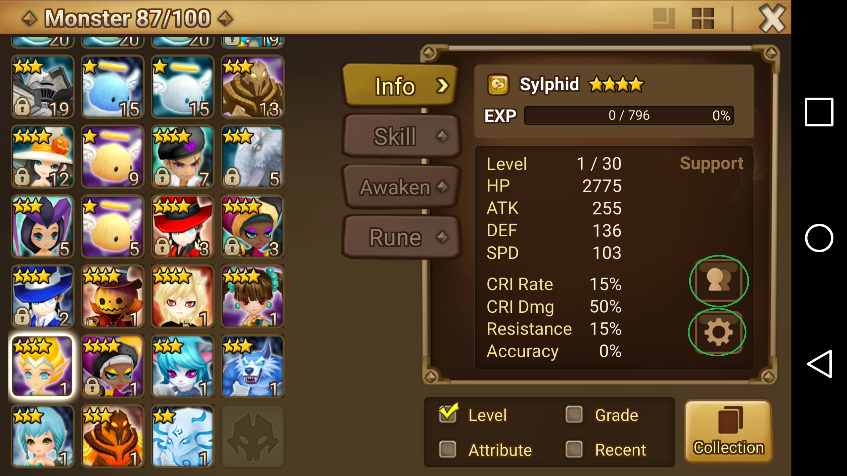 There are two buttons on the information page, one of which is very important. The top button opens monster debate where people can leave comments about the monster. Can be useful, but mostly very little information and a high likelihood of having spam in the comments.

The bottom button with the gear, however, has some very important options on it. When we look at the screen that comes up, we have two check boxes and three buttons. The most important thing on this page is the Lock Monster check box. 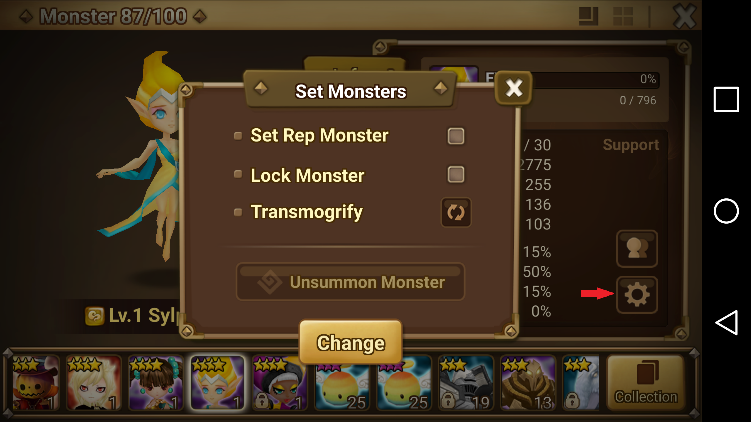 By checking Lock Monster, it will prevent you from making the mistake of accidentally feeding a monster you want to another monster. Few things are worse than summoning that monster you’ve been waiting for and excitedly skilling or leveling up and realize that you just fed your Galleon to your Barque by mistake.

So do yourself a favor and if you summon a monster you want, the first thing you should do is come to this screen and lock it. 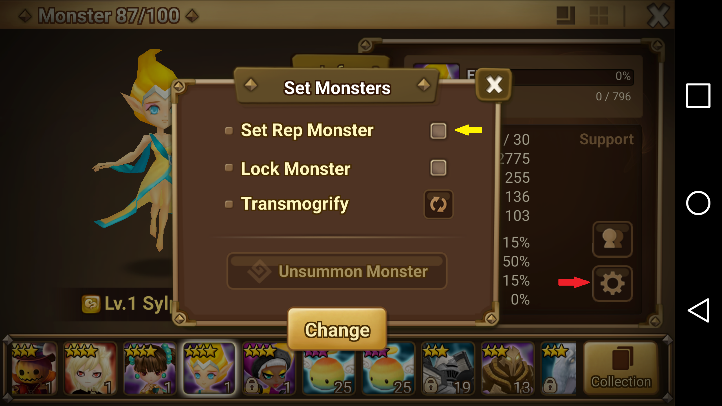 Checking the Set Rep Monster box will automatically check the Lock Monster and it will also make this monster the one your friends can use. You can only have one monster at a time set as your rep monster, and it should be used to help out your friends, not show off your cool new monster that is level 1 and has no runes. 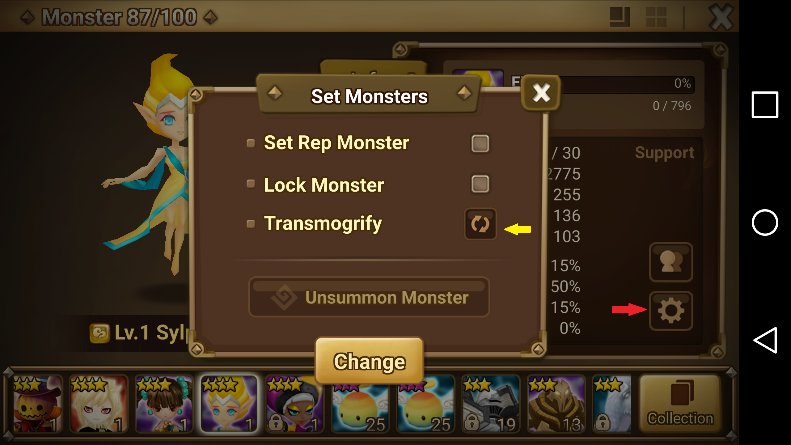 Transmogrify is a system that can change the look of your monster. These looks can sometimes be purchased, or a resource can be collected for it. It doesn’t change the power of the monster, but it can be fun and some have very cool animations for their skills. Unsummon monster will… unsummon the monster. There is no real reason to ever do this, you get more benefit by feeding the monster instead.

Finally, make sure to hit the change button to leave this screen, otherwise the boxes you checked won’t take effect.

The final button to talk about on the monster screen before we start looking at the monster itself is the Collection button at the bottom right of the screen. 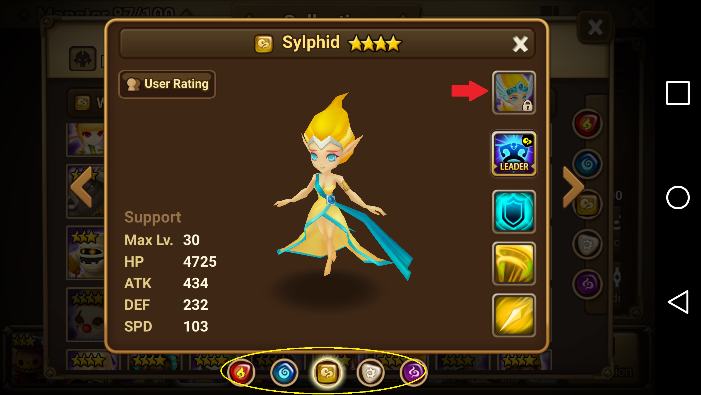 The Collection screen has all the monsters available in the game. By selecting one, it will show its stats on the left side, skills on the right side, and the model in the middle. The row of attribute icons along the bottom can be tapped to view the different attribute variations of the monster, and the icon at the top right switches between the base and awakened versions of the monster.

The main advantage of the Collection is you can look up monsters you haven’t summoned or don’t currently have in your possession. Curious as to what the Light Horus does? You can look it up in the Collection. Now that we are familiar with the monster screen itself, we can move on the monster.

So let us look at our example monster. 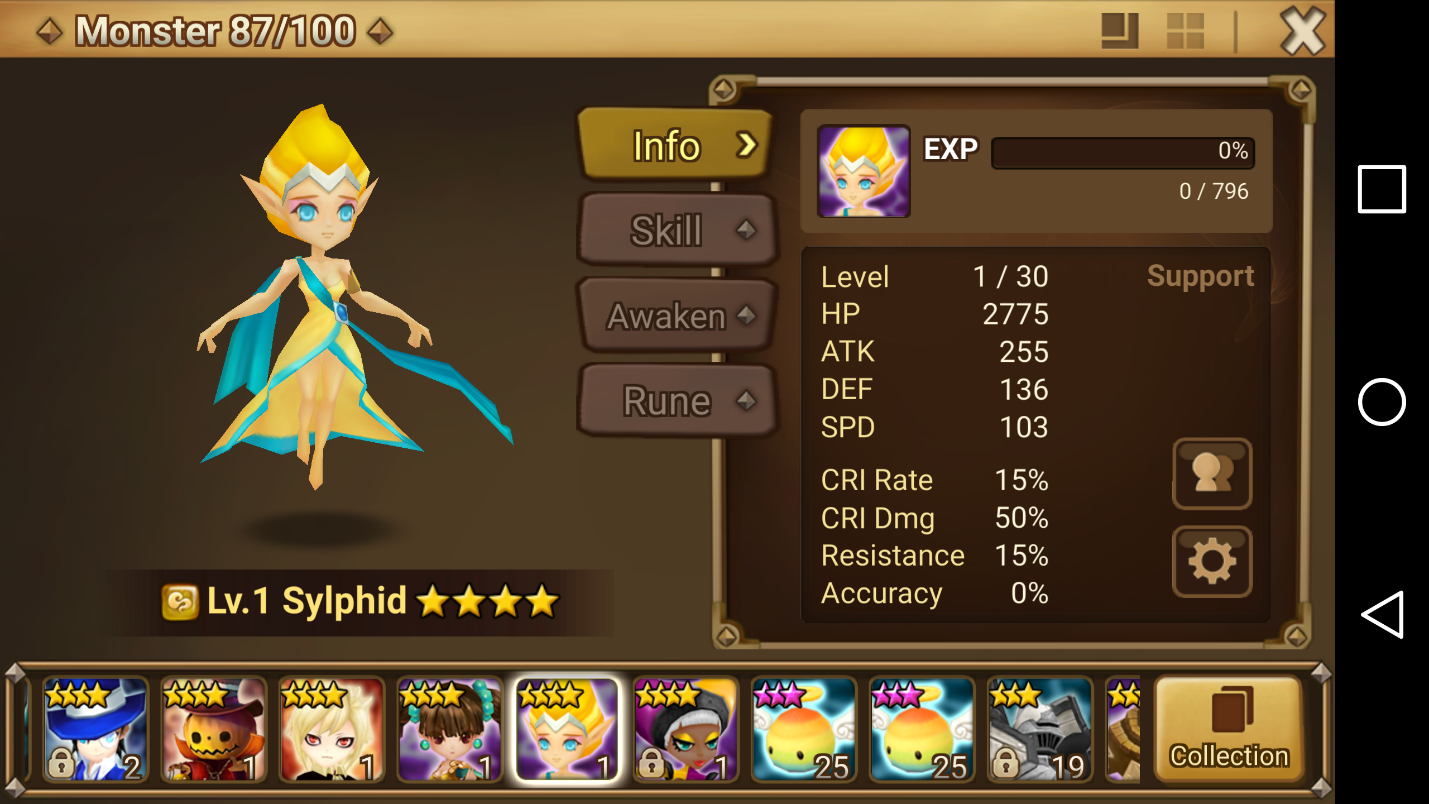 We see our pretty model floating there, and our first information is below the model.

From left to right, we first see the attribute icon. This one is yellowish with some swirly design in it, and it tells us this is a wind monster. We can also tell this because wind monsters tend to have blonde hair and wear yellowish or brownish clothes, but the icon makes it certain.

The attribute is important due to the attribute system, we know this unit will have an advantage over water units and be vulnerable to fire units. Light and Dark units are much rarer than wind, fire, and water units.

Next, we see the unit is level 1. Not much else to say here yet.

Then we see the monster type or family name. This lets us know this is a Sylphid, and combining it with previous knowledge, it is the Wind Sylphid. There are usually some elements that are more desired within a monster type due to the different skills, with time you will become familiar with this.

Next, we see the grade, or star value the unit is at, which is four stars (4*). Every monster in the game has two important grade information. All monsters can be leveled up to the maximum of 6*, and the first information is what grade the monster currently is. The second is the base grade of the monster, or how many stars the monster has when it is summoned. 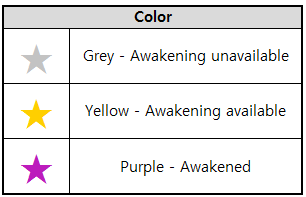 This is a fixed number based on the monster type and is expressed as its natural (or nat) grade. Our Sylphid here is a nat 4*, if you are unsure of a monster’s natural grade, you can look at it in the Collection which always shows the monsters at their natural grade. There are five possible natural grades, with the rarest and strongest being the nat 5*.

The higher the natural grade of the monster, then generally speaking the better the base stats and more powerful the skills of the monster.

So while a nat 2* and a nat 5* can both be leveled up to a 6* max monster, the nat 5* will generally be stronger. Finally, the color of the stars lets us know this monster is not awakened but can be.

However, many monsters of all grades are useful at all stages of the game, and you can complete all PVE aspects of the games without using any nat 5* monsters.

Moving on to the panels, we see that there are four panels here that will give us information about our monster. 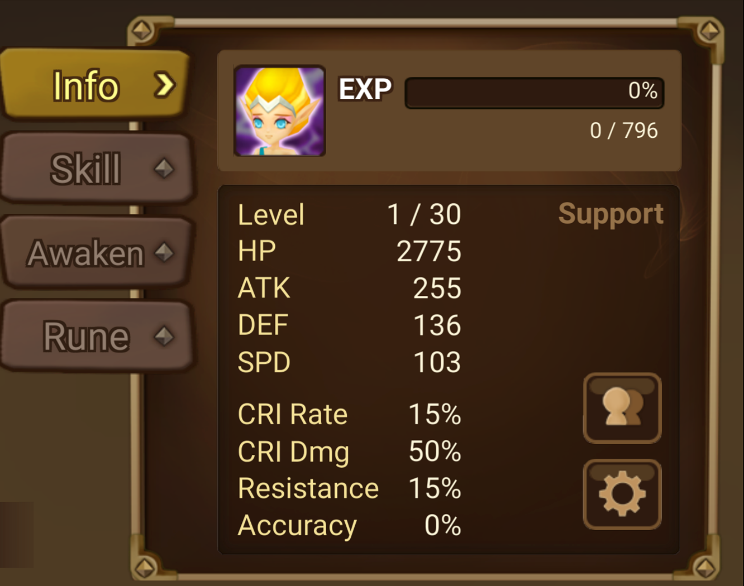 The first panel, Info, shows us our XP towards the next level, our level information is shown as current level/max level. When you reach the max level, the monster can be evolved to the next grade level and will return to level 1.

For instance, if we got this wind sylphid to level 30 and evolved her to a 5*, she would be level 1/35. This makes her temporarily weaker than she was as a level 30 4*, but she will quickly become stronger.

This also shows her type, which is Support. There are many different types, which give an idea of how they are intended to be runed and used, and we will cover this topic in a later part of this guide. For now, we have an idea that this monster has skills which will aid other monsters and that her stats are likely going to be somewhat even.

Next up we have the skill tab. This shows not only what her skills are and what they do, but how many levels the skills have and what benefits they get from leveling up. Her first skill here does damage and has a 30% chance of putting a damage over time (dot) effect on the target. 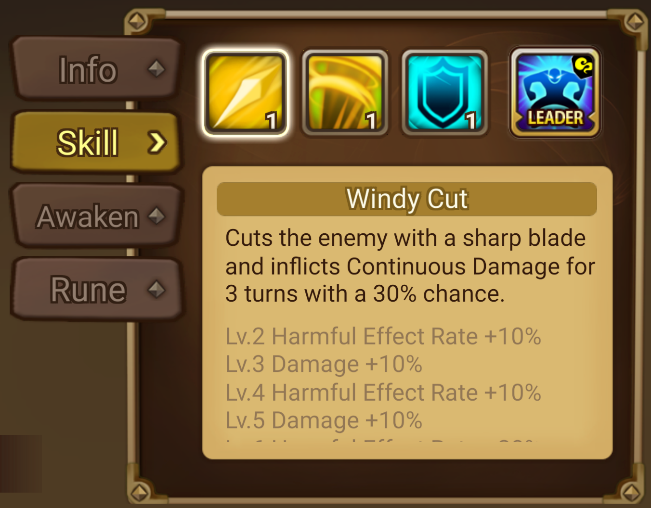 As we level the skill up, it alternates between getting more damage and increasing the chance to cause the negative effect.The second skill hits all enemies for damage and heals all allies by 20%. This fits in well with her support type, as does her third skill, which puts a damage absorbing shield on all allies. 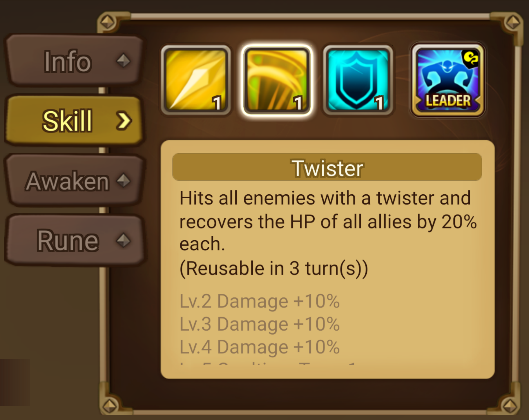 Here we see an important leveling up benefit, it reduces the cooldown of the skill. This monster also has a leader skill, which not all monsters do. There is one leader slot for each group, so you can only have one leader skill at a time. 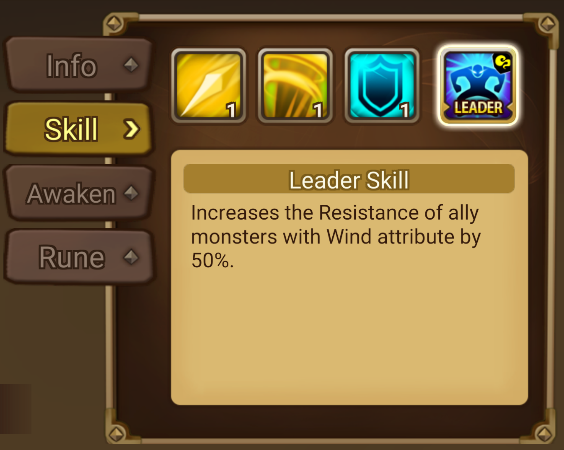 Some leader skills work with any monsters and anywhere, but leader skills with limitations are more common. Here we see her leader skill works anywhere but only for wind attribute monsters. We will talk more about skills in the future.

Next, the Awaken tab shows us the benefits gained by awakening and the materials we need to awaken the monster. 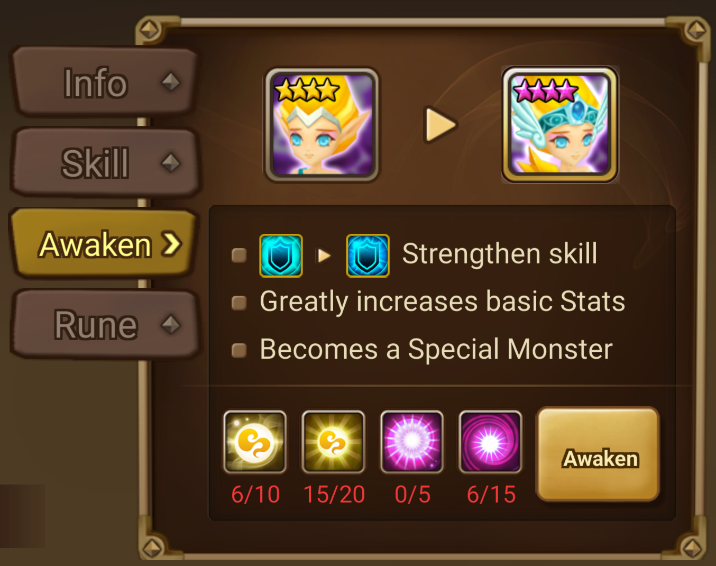 Monsters can be awakened at any time if you have the materials, they don’t need to be a certain level or grade. When awakened every monster gets a bonus, it might be a new skill, a leader skill, a bonus to a specific stat, or as is the case here, a skill may get stronger.

The final tab, Runes, has our rune slots and is a very important part of the monster, not inconsequentially runes will be the topic of part two of this series. 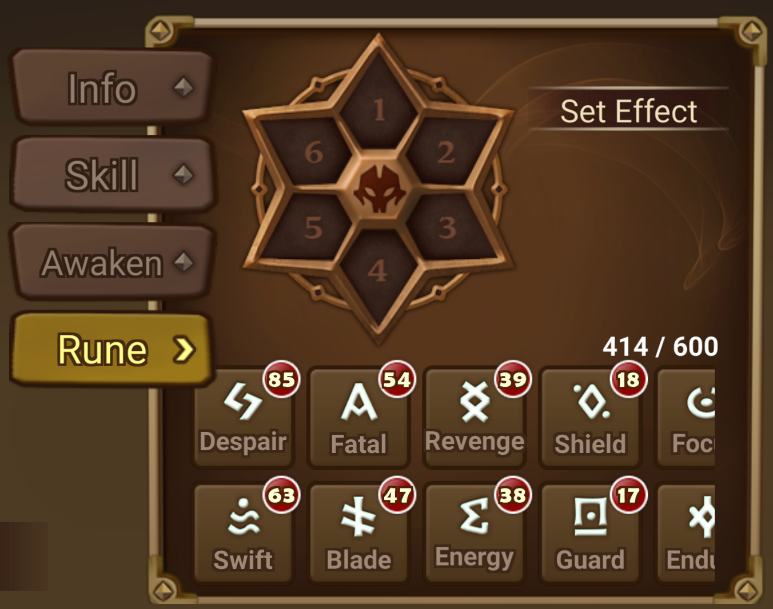 So now that I’ve looked at my monster, I have an idea of what she does and what I can use her for. Do I need her to do big damage? No, but because her skill 1 can put a 3 turn Continuous damage on the target, she does not insignificant damage over time. Her skill 2 heals the party, hits all enemies and, at max skill, can be used every other turn.

Her skill 3 mitigates incoming damage and does so even more effectively after she is awakened. Her heal isn’t really big, so I may not want her as the primary healer, but overall she has some good support options, and a useful leader skill if most of the team is wind monsters.

So I want her to be fast, to get her heals and shields off as well as to stack her dots on. I want her to be survivable so that she doesn’t die if she gets focused. Now that I have an idea of what I want her to do, I know how I want to rune her, using the options available to early game players. And that is what we will discuss in the next episode of the Beginner’s Beginner Guide!