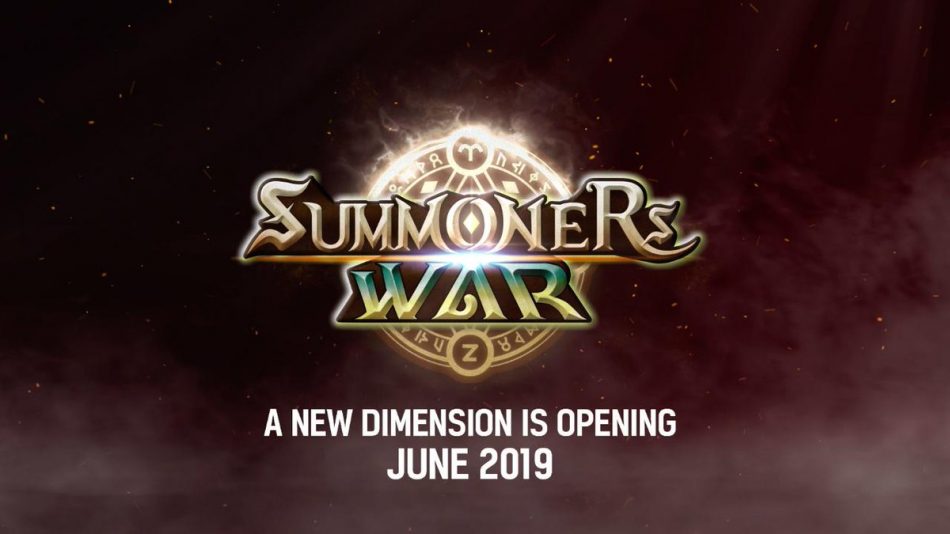 It’s coming, people! The Dimensional Hole is finally on its way after all these years!

Anyway, do you know that mysterious island that’s been in the map since the dawn of time? If you scroll all the way to the right, you’ll see this little island thingy, tucked right under Chiruka Remains (which, for some reason, is now called Charuka Remains). 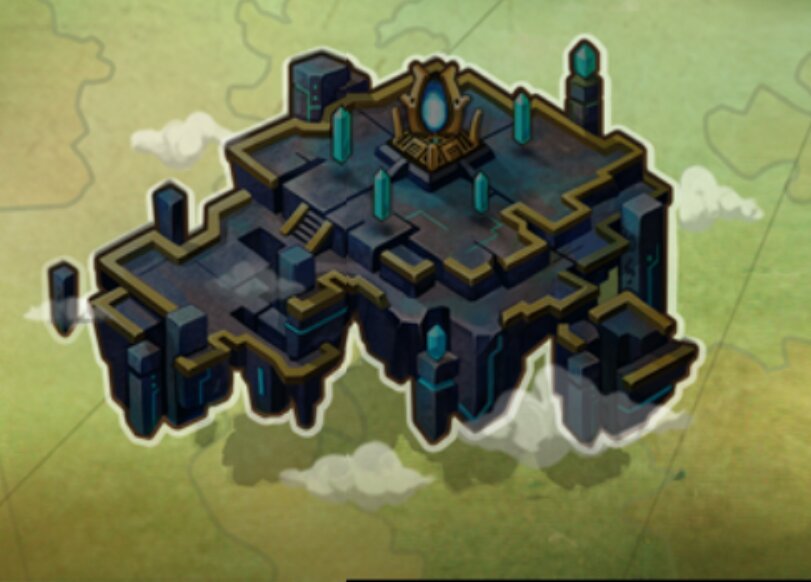 Whenever you clicked on it, it just said “Preparing Update…” just like the Rift of Worlds before it was actually added into the game. Here’s the thing, though; the Rift of Worlds got added in…I’m pretty sure mid-2015 or 2016 if my memory serves me correctly. The Dimensional Hole, however, did not. Later on, the Dimensional Hole was promised to come by the end of 2017. Well, that certainly didn’t happen. 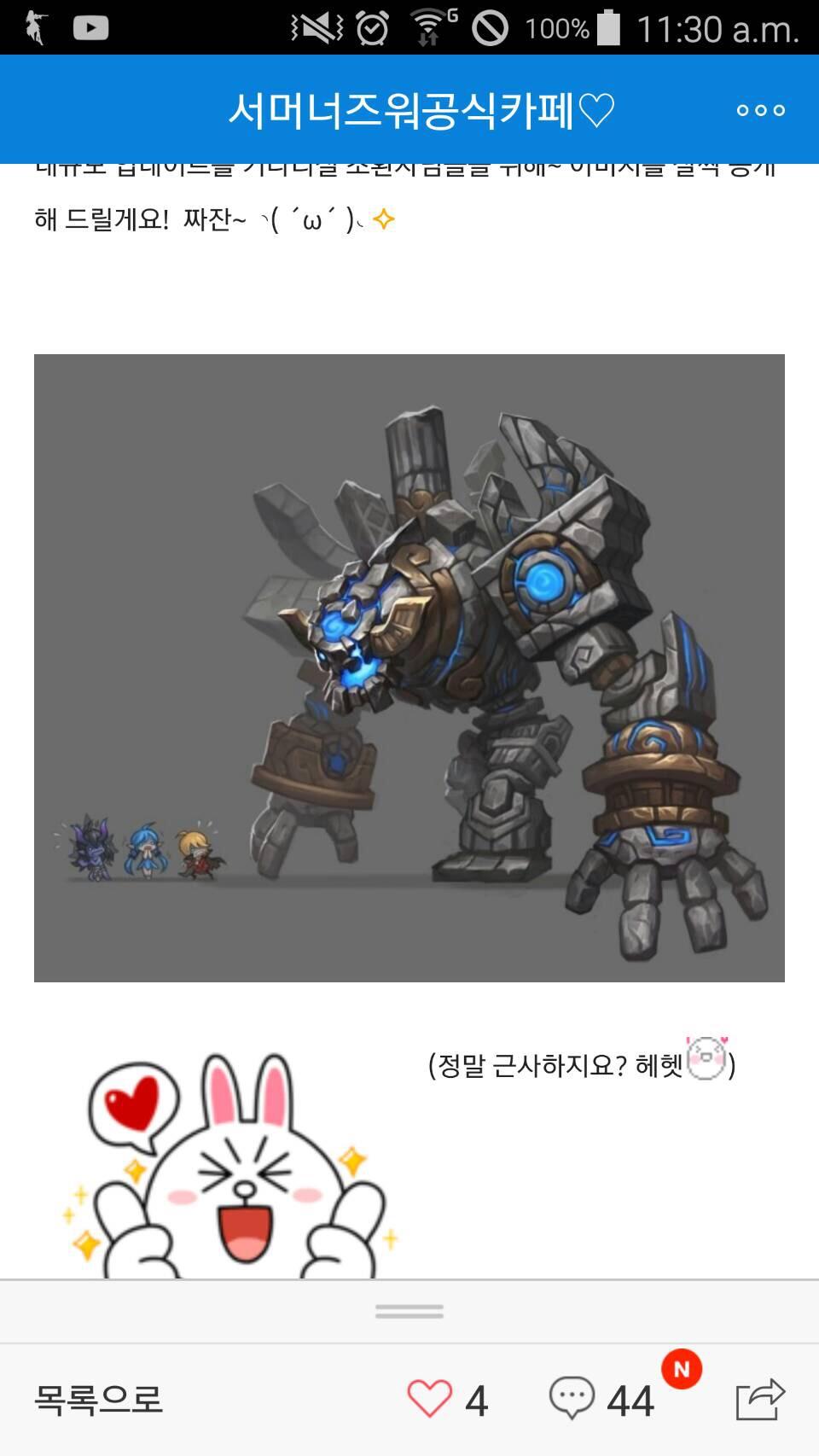 Now let’s fast-forward to March 30th, 2019. With the arrival of the newest update at the time, version 4.2.5., not much was changed, except for one thing. The Dimensional Hole no longer said “Preparing Update” whenever you clicked on it. Instead, the message was changed to this: 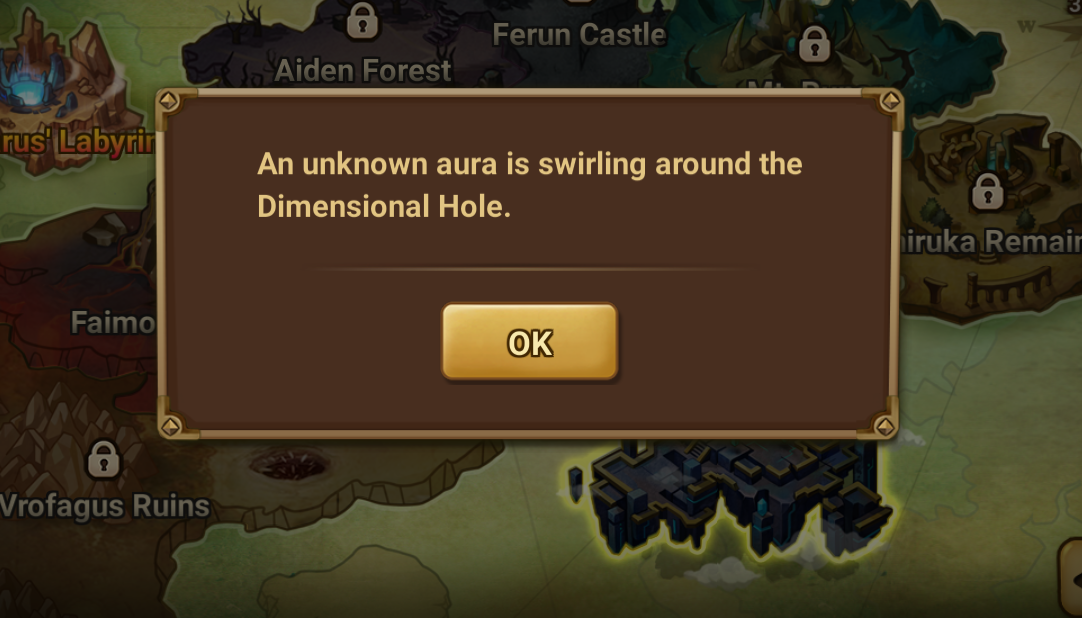 Now, keep in mind that we had gotten no news on the Dimensional Hole for over a year and a half now, and people were starting to think that it was just never going to happen at all. Some people speculated that it was literally just a text-change, because “An unknown aura is swirling around the Dimensional Hole” is more poetic and cooler than “Preparing Update…” Others still thought that this meant something great was about to come; that maybe we were finally getting the long-awaited Dimensional Hole.

BUT WAIT, THERE’S MORE. Let’s fast forward again, to May the 5th, 2019. Version 4.2.7 dropped, bringing us the Ancient Crystals, where we can sacrifice our nat5 dupes to get Ancient Crystals for the Ancient Magic Shop. Standard QoL update, right? WRONG. Something else came with this update, too. Namely… 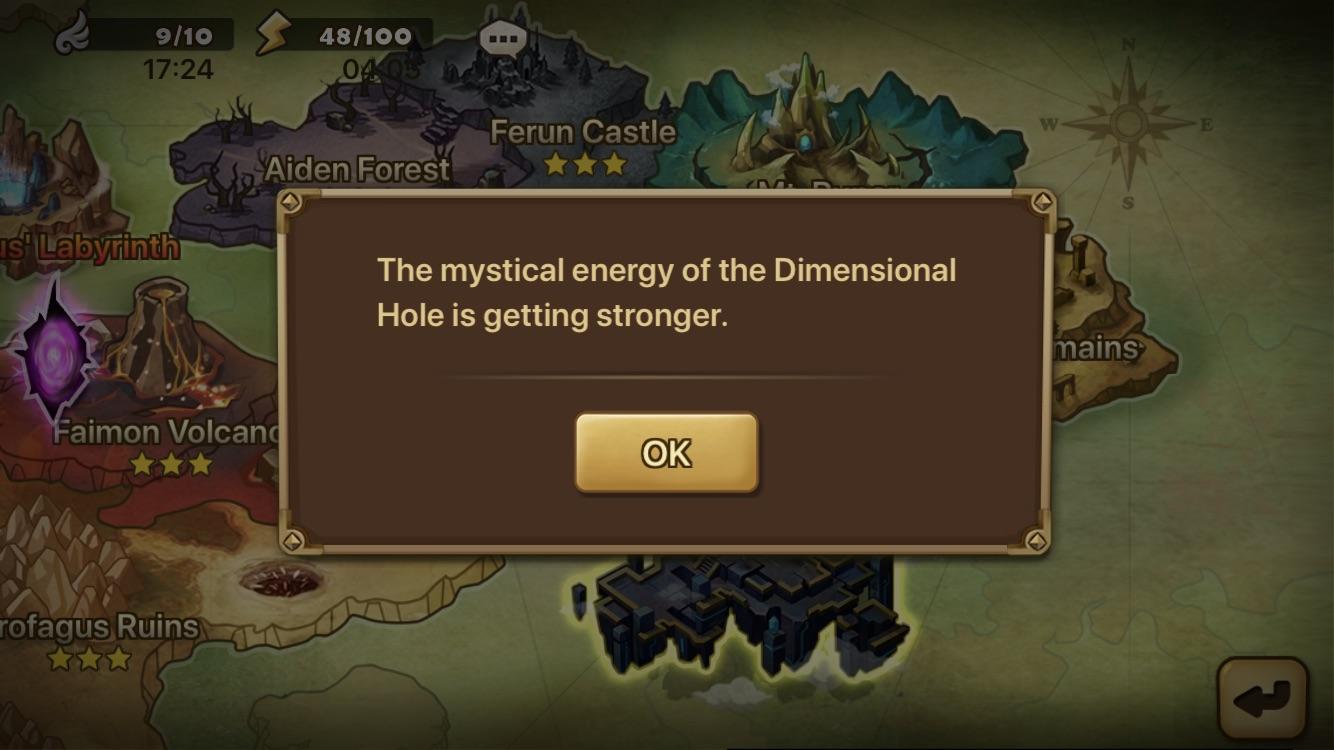 And oh lawd he comin’, I tell you. So now we have a rough date of when the Dimensional Hole is coming out (June 2019) and a teaser video to let everyone know that “yes, this is not gonna be another 2017.” Let’s fast-forward through this weird movie of life one last time, to roughly around 3 days ago, on Friday, May the 23rd, 2019. Com2uS apparently sent a teaser of what’s to come in the Dimensional Hole to the French community; a streamer called JunpeiFrance. This teaser included a poem in French and this image below! 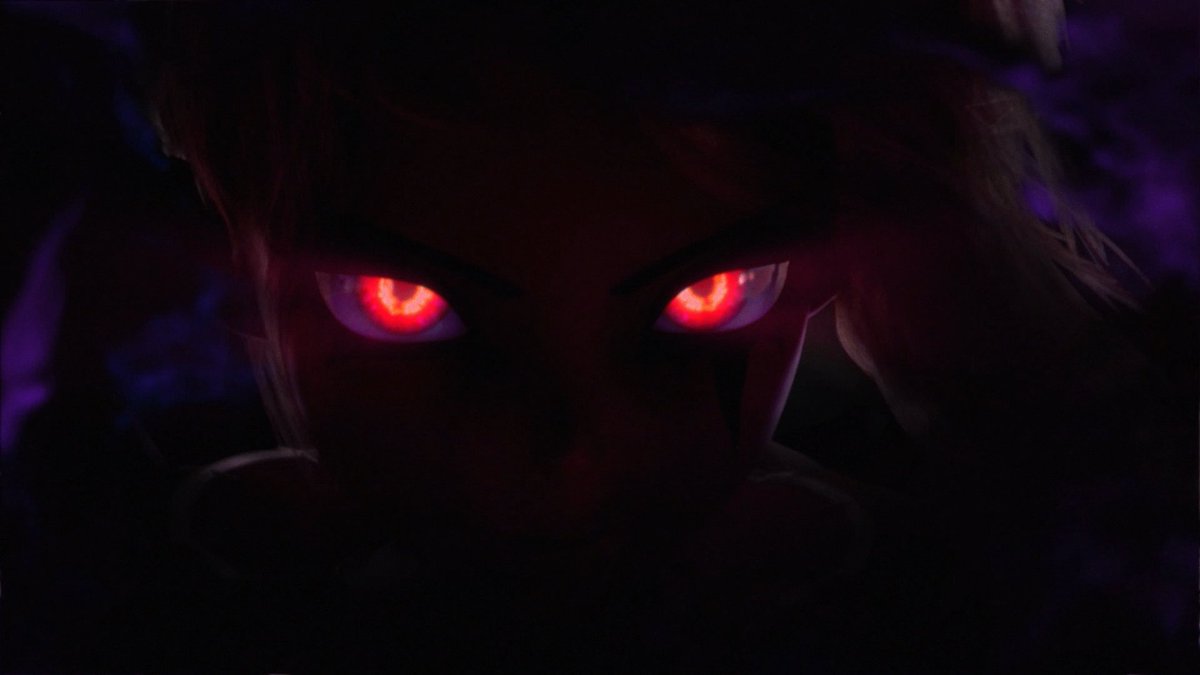 The poem, when translated to English, apparently reads this:

Burn, sweet flame, burn
My reign of terror thrives since the dawn of time
I’ll keep on existing when you will no longer be

Burn, sweet flame, burn
I’ll track you down past dusk
You will succumb to my mesmerizing gaze

Burn, sweet flame, burn
Many have looked forward to my fall
And in vain they fulfilled this fight

Burn, sweet flame, burn
My nobility only is matched by my ferocity
There isn’t any blood that can make my dry heart beat

Burn, sweet flame, burn
What is your’s is mine
What is mine is what they own

Burn, sweet flame, so that I can consume you
Your loss shall be my victory
Your life shall be my standard.

According to a post on the /r/summonerswar subreddit that I can’t find now, the “Burn, sweet flame, burn” can also translate to “Twinkle twinkle little star.” Take this with a grain of salt, because, again, I can’t find this post anymore, so I could just be remembering things wrong.

Soon after this was announced on the subreddit, a user by the name of /u/Valliebear had increased the brightness and contrast of the image given to JunpeiFrance, and it revealed this! 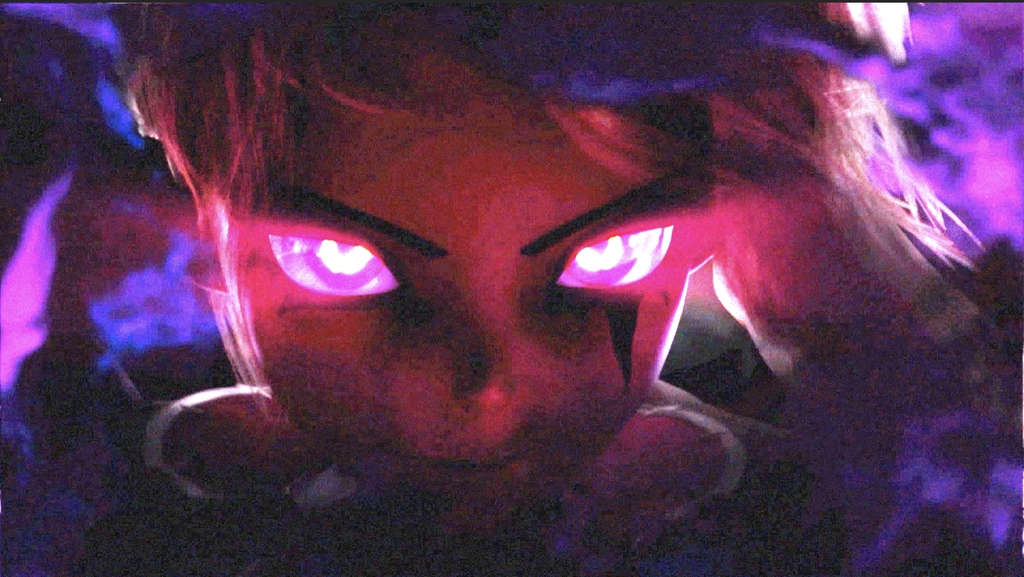 Now, I’m gonna try my best not to jump the gun here, but IT LOOKS LIKE AN EVIL LUSHEN AAAAAAAAA- but seriously! You can see, on his/her left eye, that there’s a scar running down it, like in the Jokers’ models for both their awakened and unawakened form; the hair also looks pretty similar to the awakened Jokers as well.

However, as you can see here, it turns out that the Jokers have that scar on the right eye, and it extends both up and down, instead of just down like in the teaser image. As it turns out, Com2uS is seriously trying to hype up the release of the Dimensional Hole, and it shows.

About a day ago, a compilation of Dimensional Hole riddles was made. Apparently, Com2uS was contacting all sorts of SW streamers or content creators, asking them to do videos about this, while giving them vague riddles to work with. They’re apparently in the perspective of the boss. Here are all the riddles that we have so far.

I’ve come back to reclaim
Soon over this land I’ll reign
Between my mates, I am adored
Bow to your master

I have been here since the dawn of time
I will still remain when you are dust on the ground
Once the sun sets, I will hunt you down
With my hypnotic gaze, I will make you mine

Now, there has been some speculation about what these riddles are about. Some say that it’s actually from different monsters. For example, JewBagel’s could be about a reviver, and Childish’s riddle strongly reminds me of the Pirate Captains, because of the “Soon over this land” line and “Between my mates.”