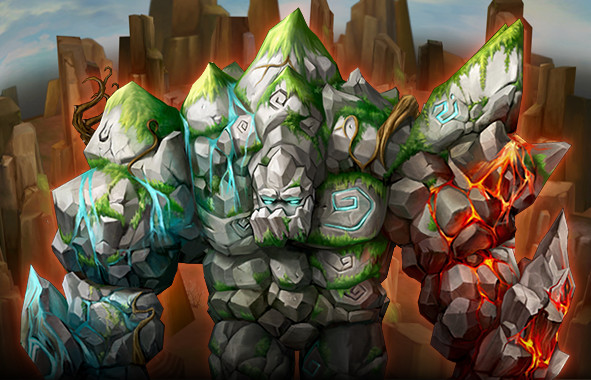 <![CDATA[Let me start off by saying <em>do not follow in my footsteps. My earliest articles were made way back when I didn’t have Veromos, didn’t care about GB10, and still used four-star runes. With that being said, I’m going to use my past mistakes as an informative guide on what not to do as an SW newbie. Please keep in mind that everything I mention here is something that I have done in my past. If you start digging through my post history, you’re going to see another, earlier article on what not to do in Summoner’s War. However, that article didn’t have that much information in it, and now that it’s been a little less than two years since writing that, I figured that now that I had more experience I could make a better article. Let’s begin! 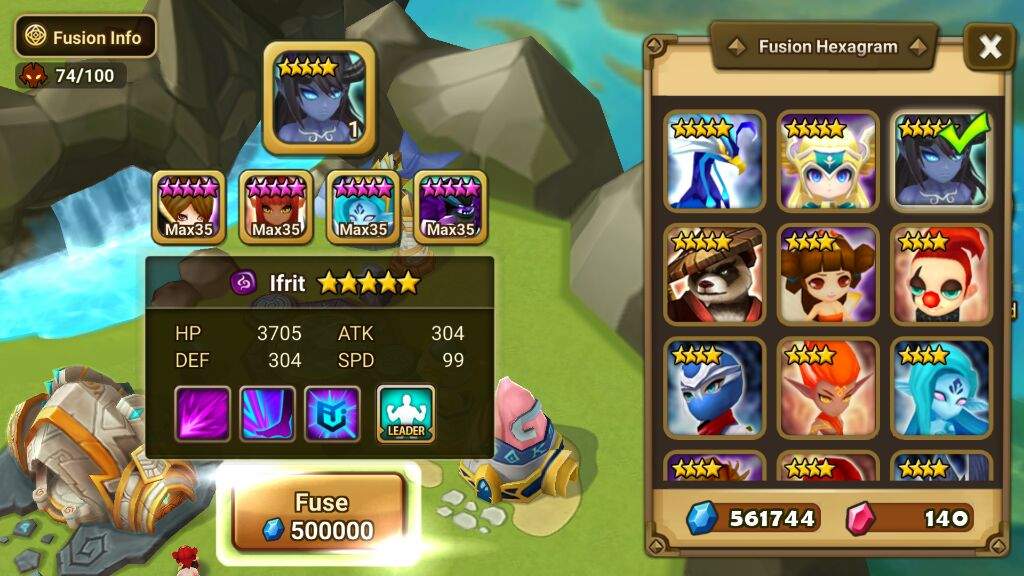 Oh, Veromos, you’re a good dark demon with cleansing magic. I don’t know why so many newbies insist on not fusing you. Seriously, though; the amount of people who think they don’t need Veromos is outstanding. I mean, sure, you could manage to scrape by without him, have 5 minute GB8 runs; but for real, guys, Veromos makes it ten times easier to progress in the game. Getting your GB10 team up and running along with stable is just the very beginning of the game. Veromos is essential to having a GB10 team: he provides Continuous Damage, an AoE stun and can cleanse the defense break the GB10 boss applies off of all allies. I actually didn’t fuse Veromos until a year and a half into the game, after I had gotten Charlotte, Ritesh, and Eladriel. It took me another two months to stop being stubborn and follow some GB10 guides to make a proper team. My reason behind not fusing Veromos was that I thought it wasn’t worth my time, and I could get by just fine without him. According to my six-minute GB6 team that consisted of Charlotte, Chloe, Shannon, Frigate, and Ritesh, I obviously couldn’t. I was a young and stupid kid. Finally, after a few months of leveling up monsters and awakening stuff, I had my Veromos and finally started building my Belladeon. After a bit of experimentation my first stable GB10 team was Veromos (L), Eladriel, Charlotte, Shannon, and Belladeon. That day was a good day for me. Of course, you’re probably not going to be as lucky as I was, so I wouldn’t recommend following my GB10 team. The standard GB10 team anyone can acquire consists of Veromos, Shannon, Belladeon, Bernard, and a +1. The +1 can vary, but most people recommend Darion. Go check out some guides to GB10 for the runes and stats you need for each monster and you’ll be on your way to being a not-horrible player! I am aware of some people having found out that if you want to speed through GB10, you could just completely skip Veromos and fuse Sigmarus first things first, but there are ups to having Veromos, such as having a very versatile mon who can really help in GB10, DB10 and TOA. I do recommend fusing Sigmarus too, though! He’s really good as your AoE water damage dealer and has great Crowd Control. 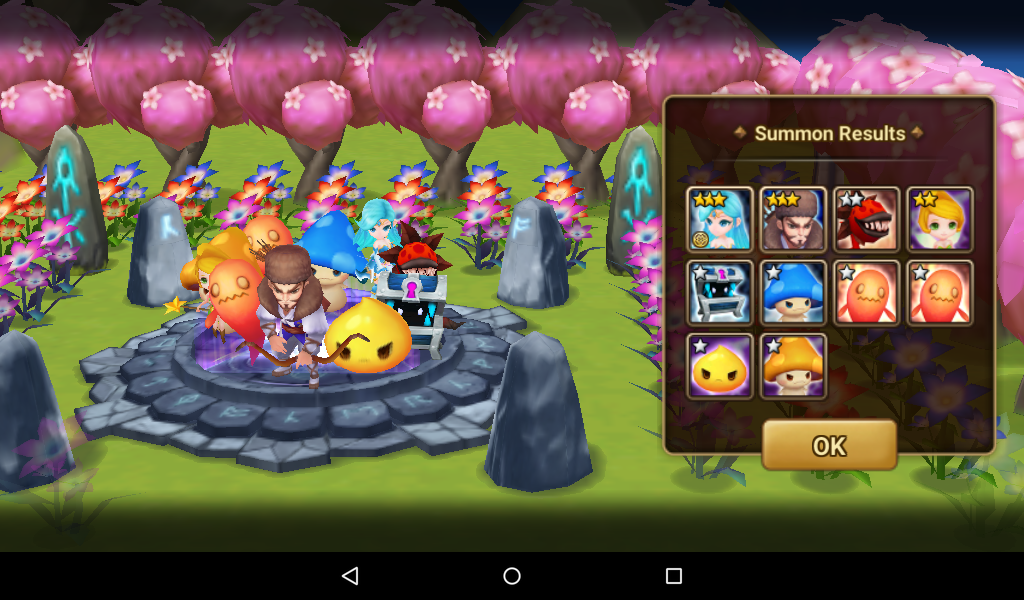 So there are a bunch of things that you could do horribly, horribly wrong when it comes to who to feed and who to keep. Here’s something I did once: I fed my Draco to Orion. Now, if you don’t know, Draco is the fire Brownie Magician, and Orion is the water one. Feed one to the other, and you’ll level up one of their skills. They’re also both natural 4 star mons, which means they’re significantly rarer than your average three-star. Guess what. That Draco I fed more than 3 years ago was my only copy of Draco. In all my years of placing, I have gotten back every four-star monster I fed away except Draco. It would be worse if Draco had been a super overpowered monster, like Garo (another guy I fed away but managed to get back), but at this point I don’t care. What am I trying to say with this story, you may ask? NEVER feed away any natural four star or natural five stars. You never know if they’re a super good monster in disguise or will get buffed soon to be better. Don’t do what I did. Don’t feed your Draco. For that matter, you should also restrain from feeding away any three-stars who are used to fuse better monsters. You’ll never know when you’re about to fuse some awesome nat5 like Jeanne, and then you realize “wait, where’s my Purian?” You’ll think that you can just summon him or find his Secret Dungeon, but then a big wave of bad luck hits ya. Granted, it’s gotten a lot easier for you to be able to fuse things, now that most of the monsters are farmable/drop from scenarios. You can usually tell which monsters are fusion materials, because in the bottom right corner in the Power-Up Circle they’ll have a little fusion hexagram on their icon, like this: TL;DR: Do not feed: fusion three-stars, your only copy of 4-star monsters, ANY Nat5.

How many newbies even know that you can lock your monsters? “Locking” them means that you can prevent them from getting fed or used as evolution material. You may be wondering why you would even want to do this. After all, it’s inconvenient for powering up your mons! Here’s the thing, though: You can choose to only lock the monsters that are important to you, such as your newly built Shannon or your Lapis. I’m not expecting you to go around, locking every last one of your monsters; just lock the important ones. Believe me, it could save you from accidentally feeding away a particularly important monster and any runes on them. To lock your monsters, click on the cog wheel in the bottom right corner of their info screen. 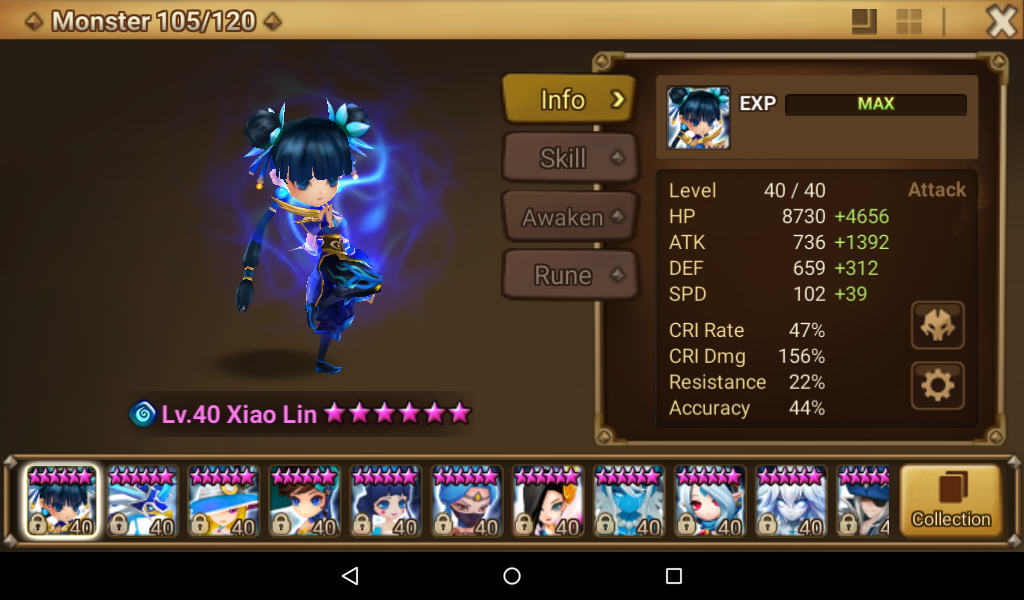 Once you bring up the menu item, choose “Lock Monster” and hit Change. It’s as simple as that! 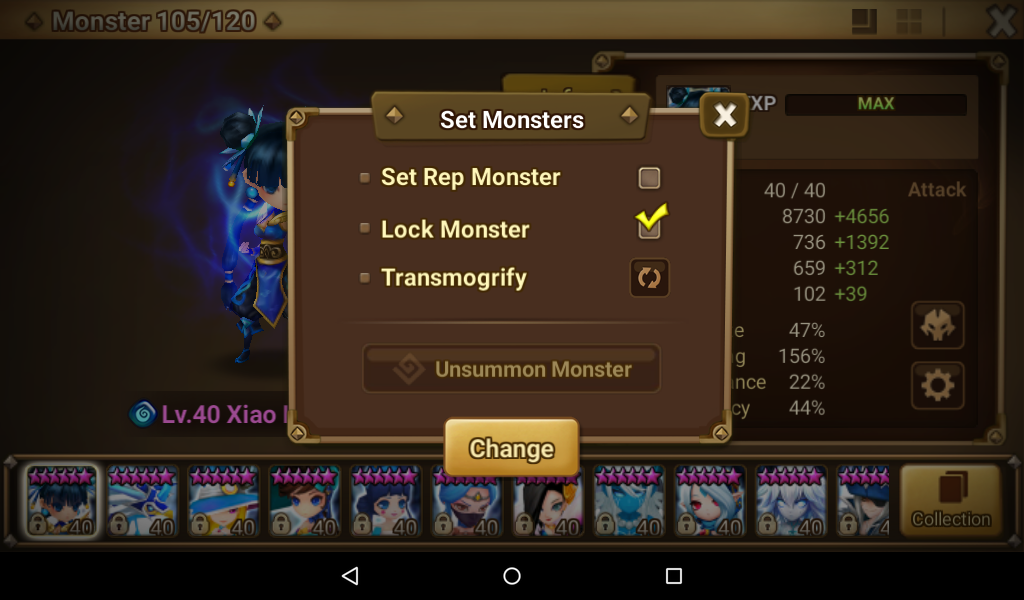 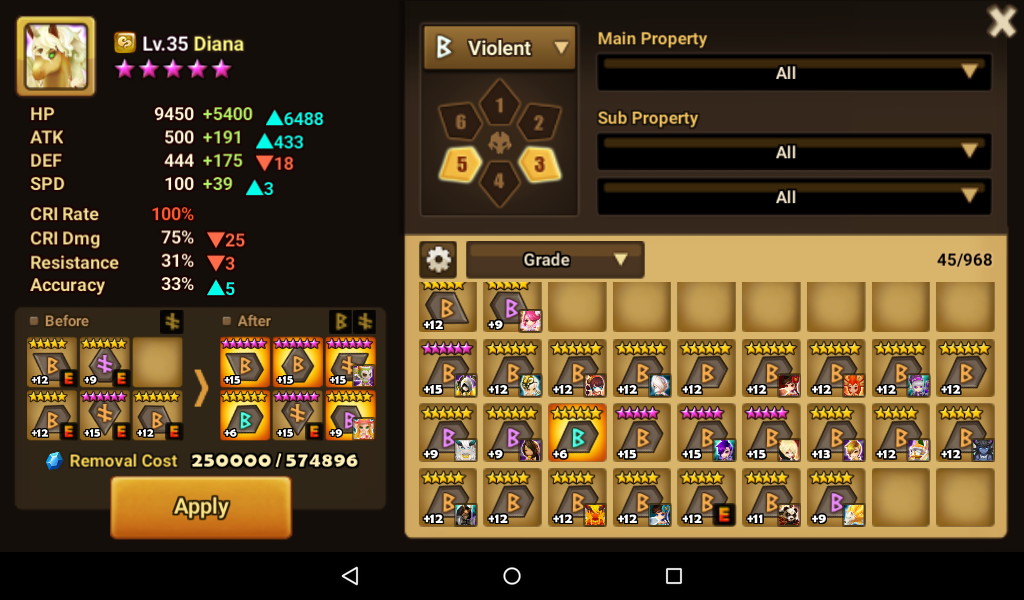 It’s easy to mess up what makes runes good or not. There’s the whole thing about what stats go well on what monsters, whether blue runes are worth selling or keeping, the main stats (slots 2/4/6), and don’t even get me started on substats! Runes are actually super important – sometimes even more so than just the monsters. I’m actually gonna try and write some articles about substats later on and what I’ve learned as to what makes them good or not, but let’s just talk about the main things. The “main stats” are slots 2/4/6, because they can have different stats each time. Slots 1/3/5 always have the same main stats, so don’t try to farm for any odd-slot runes that have any different main stats. Slot 1 will always be flat ATK – “flat” meaning just a set number instead of a percentage of the monster’s base stats will be applied. Slot 3 will always have flat defense, and slot 5 flat HP. With these slots, the substats are the stuff that matters. Now, let’s talk about the main stats of slot 2/4/6. These are the ones that are can change. Don’t get me wrong; you can’t change the main stat of runes once you get them, but you can get runes with different main stats from each other. Slot 2 has 7 possible main stats: HP, HP%, DEF, DEF%, ATK, ATK%, and SPD. You’ll notice that there is no percentage for the SPD – or speed – main stat. Truth is, I’m still not sure why they don’t have percentages for SPD, but that’s just how Summoner’s War works, I guess. Now, people say to never use flat stat 2/4/6 runes, but Slot 2 is the only exception: that being the SPD main stat. Half the time, people say that the best Slot 2 main stat is SPD. Speed is an incredibly important part of the meta, which you’ll learn later. Usually, the best Slot 2 stat to use is SPD, due to the speed meta. However, some bruisers/tanks will use HP%/DEF%, and attackers will use ATK% stats. There’s also something else I’d like to point out before we go on: each of the even-slots have at least one substat that can only be found on their rune. The slot 2 rune is the only rune that can have SPD has a main stat. Now let’s talk about slot 4. Slot 4 can have HP, HP%, DEF, DEF%, ATK%, ATK, Crit Rate% and Crit DMG%. Crit Rate and Crit Damage are the slot-4 exclusive runes. People usually don’t like to use slot 4 runes with ATK% on them as the main stat, due to the fact that using the Crit DMG% runes means you can get way more damage than with just substats alone. However, attack based healers like Mihyang will usually call for slot 4 ATK% runes. Slot 4 Crit Rate runes are…situational. There are maybe two monsters off the top of my head that would benefit from slot 4 Crit Rate runes; them being Diana the wind Unicorn (a late-game monster whose got a passive that increases her attack bar by 25% per critical hit) and Verdehile the fire Vampire (who increases the attack bar of all allies by 20% per critical hit). Overall, I’d skip using the Crit Rate runes. The best slot 4 runes to use would be Crit DMG% and HP%. DEF% runes are for tanky defense-based mons. Slot 6 has HP, HP%, DEF, DEF%, ATK, ATK%, ACC% and RES%. ACC% and RES% are its two unique main stats; that being Accuracy and Resistance. The two best main stats for this slot are HP% and ATK%. The RES% and ACC% are, again, situational. You normally would use ACC% only for monsters who absolutely need 100% Accuracy to shine in, say, the Arena, such as Galleon. The accuracy in GB10 and NB10 are capped at 45%, though. DB10 is capped at 55%. RES% is only for the super-tanky nukers who absolutely need to resist any debuff that your enemies may throw on them. Monsters that come to mind are Rina, Ariel, Dias and Khmun. The RES% runes are surprisingly efficient, too. All monsters come with at least a base Resistance of 15%. A six-star, maxed out RES% rune gives 64% resistance. If you throw this rune onto your monster, they’ll automatically have 79%, just from this alone; meaning you only have to get 21% of resistance from substats to totally max it out. 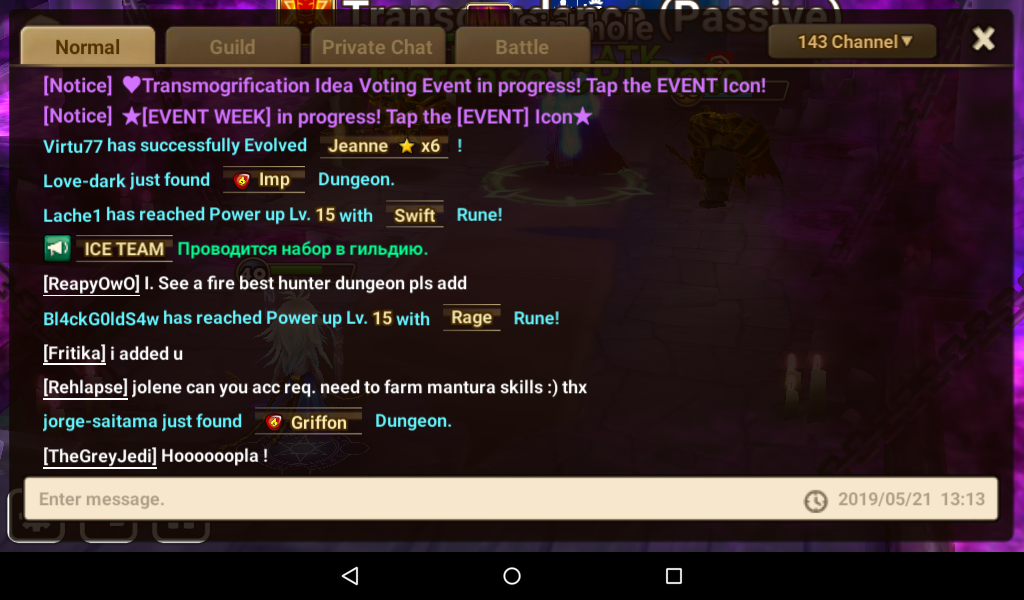 Here’s the thing: Not everyone in this game wants to help you. Some people just want to watch the world burn, and they could easily do this by telling newbies in chat completely wrong advice that should be followed whatsoever. They might say something like “feed away your Magic Knight, she’s useless” or even something as simple as “you can get legendary runes in the Hell difficulty in scenarios.” (Spoiler alert: You cannot.) My advice would be to take everything that the chat tells you with a grain of salt. You can listen (er, read) to what they tell you, but try to get a second opinion. If you have a friend who’s also into SW, you can ask them about it, or you can look on the internet. The Summoner’s War subreddit or this website here is a good place to start. We won’t lie to you; promise! Anyway, those are a few well known (and even some lesser known) tips about Summoner’s War about what you definitely shouldn’t do. I’m Sara Ann, and I’ll see you in the next article!]]>