Runes are almost as essential to Summoner’s War as monsters themselves. It’s the runes that can make or break a monster’s power, and there are always multiple kinds of ways to rune monsters. Today, though, we’re going to be looking at the Top 5 Overpowered Runes. These runes will have insane effects, and will make you scream “WHAT?!” if you don’t know that a monster you’re fighting is equipped with a set of these. 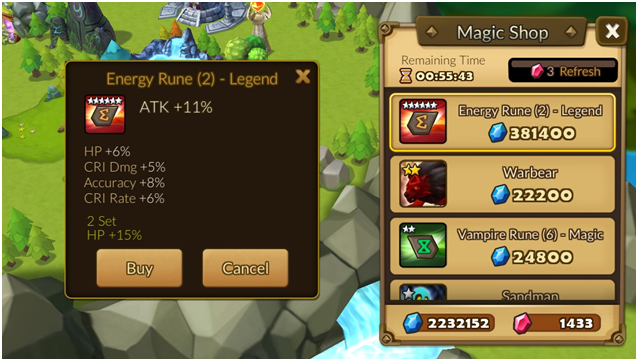 Ah, good ol’ Energy runes, the first runes that every player puts on at least one monster in the beginning of their Summoner’s War career because they don’t have access to better runes.

Commonly found on support/HP based monsters like Chloe, Chiwu, Eladriel and Dias, these runes will increase the HP% of the monster wearing a set by 15%. These runes can be found in Giants’ Keep and Garen Forest, and the slot 2/4/6 runes with HP% as their main stat are the ones that people keep most of the time.

This one’s pretty low on the list, because this doesn’t apply any special/unique effects to your monsters, as opposed to literally all the other runes on this list. I will give it a spot on the list, though, because HP is a necessity for all monsters. Some monsters, however, need HP more than others. 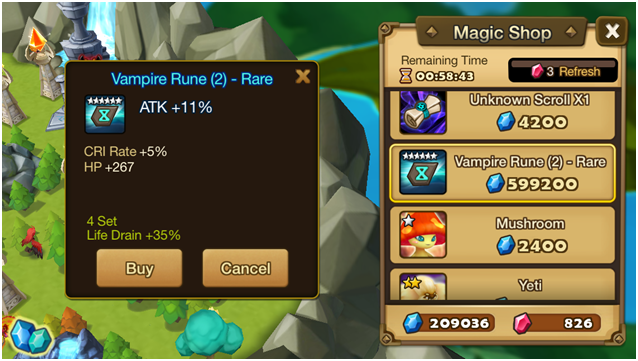 Vampire runes are the best friends of Psamathe, Daphnis, and Laika. No, it’s not recommended to put them on actual Vampires.

Vampire runes are a four-set type, and when equipped, the monster that has these runes will absorb the HP of the monster(s) they attacked by 35%. Daphnis especially depends on Vampire runes, due to his third skill as of this writing, Hellfire, where he decreases both his and the enemy’s HP by 30% and then inflicts massive damage on said enemy.

These runes are especially dependent on the slot 2/4/6 main stats to be ATK%, as the harder a monster can hit, the more they’ll heal. It’s really annoying to have chipped away most of an enemy’s HP, when they finally get a turn and you realize they’ve been runed with Vampire runes, undoing over 50% of your work.

No, but seriously, don’t put these on Vampires. Literally none of the monsters in the Vampire family would benefit from them, with maybe the exception of Liesel, but he’s kind of trash. 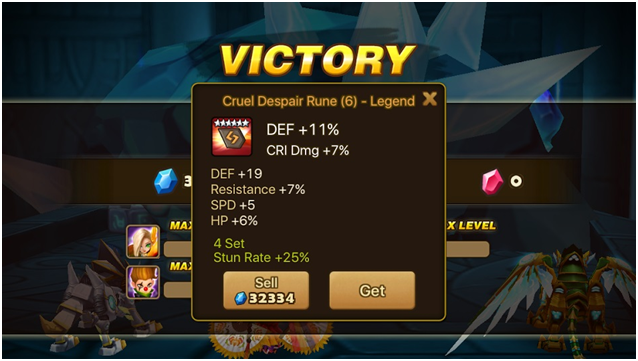 Despair runes are used on plenty of monsters. It’s a 4-set rune that, once equipped, will give the monster a 25% chance to stun the enemy that’s being attacked. Naturally, people are going to put that on AoE, or Area of Effect, nukers, because you want as many monsters as possible stunned. I myself have my Charlotte runed with Despair and Blade.

Even though there are some monsters that aren’t AoE, they’re just so darn overpowered that they might as well be AoE, and therefore are going to love Despair runes. Some examples of this are Artamiel (light Archangel, the face of the game) and Xing Zhe (wind Monkey King) Both monsters have a passive skill that basically gives them a chance to counterattack when hit, which means they have Revenge runes on without actually having Revenge runes.

Also, is it just me, or when fighting an arena defense that has Despair runes on, does the chance of getting stunned by the enemies go up to 100%? 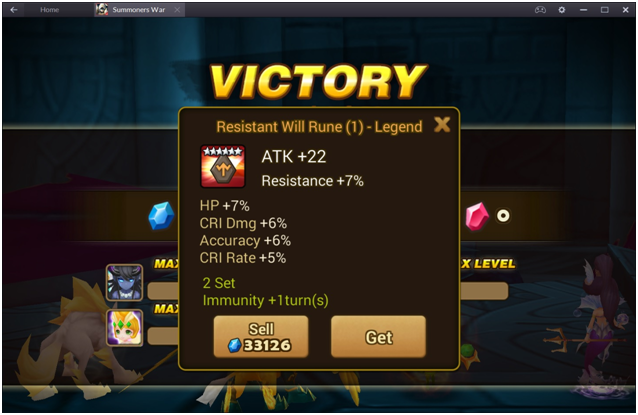 A monster that is equipped with two of these runes will gain Immunity for one turn, and only that monster, which is why all monsters in late-game arena defense need to have Will runes on. As long as the monster has Immunity on, they’re protected against literally all harmful effects – bombs will be resisted, they can’t be frozen, nothing.

Monsters such as Chloe and Fedora have skills that can grant Immunity on all allies, but when your team of all-Will monsters starts an arena/guild war battle already immune before your Chloe even gets a turn, it’s really helpful.

Of course, monsters like Chiwu would have a blast with those with Immunity, as he can strip beneficial effects with his second and third skill, and his third skill heals himself if he successfully strips beneficial effects off of the enemy. If you’ve noticed I’ve been mentioning Chiwu a lot, it’s because I had a dream last month where I summoned him and now I’m trying to get the pretty Pioneer boy into my island. 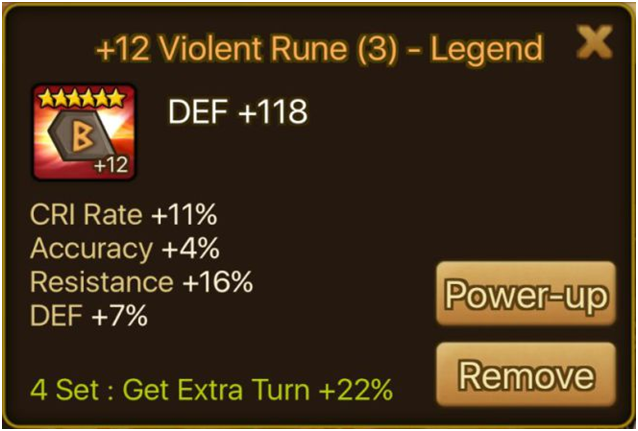 Yep, you and I both knew it was coming; how could this not be Number 1?

The infamous Violent runes, four-set runes that, when equipped, has a 22% chance to give the wearer of said runes an extra turn. It seems like all enemies that are equipped with Violent runes, however, have 100% chances to gain an extra turn and if your arena offense is on Violent, you’ll have no chance of getting that elusive extra turn.

You will always find any Theomars equipped with Violent runes, and they’re always going to get at least three turns, which would effectively destroy you. Because of this, I (and the rest of the community) consider Violent runes the number one most overpowered rune in the game.

Runes are a very important part of this wonderful game of RNG and dumb luck, and the right runes on the right monster could very well get you out of Fighter 1 in the Arena and into Conqueror 1 for the first time. I’m still mildly confused on what makes which runes good on who, but I know pretty much the basics (Always sell runes with flat stats, nothing under five stars should be kept, etc.) This is Sara Ann, and I will see you in the next Top 10 List.