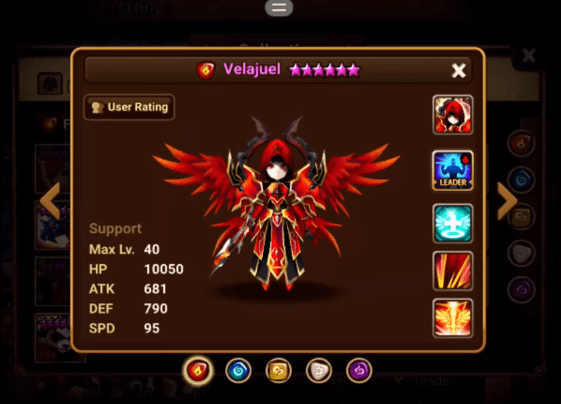 Note: An expert opinion from Pando.

Velajuel is the only monster in summoners war that cleanses a team, provides an immunity buff and boosts a teams attack bar by 30%. His unique support makes him an amazing addition to many types of defenses and offenses in both arena and guild war. In this monster highlight, we’ll find out just what it is that makes this support monster stand out.

Leader Skill: Increases the HP of ally monsters with Fire attribute by 50% Awakened Bonus: Increases Critical Rate by 15% Offers: High survivability, Debuff removal, Three turn immunity, High damage output if runed for it Useful for: ToA Normal/Hard, Regular & LIVE PVP Early Game Swift/Guard – ((Spd/Def%)/Def%/(Hp%/Def%) End Game Build 1 – Well rounded PvP Build: Violent/Will – (Spd/Def%/(Def%/Hp%)) • Aim for +100 Spd, +10000 Hp, +1000 Def, Rest into Resist and Crit. Rate Build 2 – Bruiser: Violent/(Guard/Blade/Broken) – (Def%/Crit D%/ Def%) • Aim for +1500 Def, 70% Crit. Rate, 150% Crit. Damage, +40 Speed [easytable] Pros, Cons Very high base defense, Extremely reliant on Comp. Nearly useless when alone Easily fits into almost any type of comp, Not much variety when it comes to different types of builds Stacking defense benefits both survivability and damage output, Very low base speed Looks awesome, [/easytable] Early Game: Swift/Guard((Spd/Def%)/Def%/(Def%/Hp%)) If you are lucky enough to pull Velajuel early on, don’t feel underwhelmed by his skillset. His use is pretty limited in Caiross dungeons and most other aspects of the game early on. He can be used in Dragons, especially D10, to help combat the large number of debuffs and dots cast by both boss and initial stages of each level. Overall, however, Velajuel will most likely be a supplimental monster with niche uses until you progress into the early/mid realm of competitive PvP. End Game: Violent/Will – (Spd/Def%/(Def%/Hp%)) This is both the most commonly used, and most versatile build for Velajuel. The primary goal is to stack as much speed as possible to allow Velajuel to cast his third skill – Sanctuary. Sanctuary does three of the most beneficial support abilities in game all in one skill. Cleanse, immunity, and attack bar boost are extremely useful and game changing. In order to get immunity up ASAP, speed should be prioritized within reason. I would advise a minimum of +100 spd before focusing on defense and Hp. When determining whether to rune for Hp or Defense, I suggest keeping them somewhat close in proportion to each other. Stacking pure defense is a bad idea since people will still double lushen a Velajuel, and lushen won’t glance every time. Stacking pure Hp is also a bad idea since it will completely remove his ability to deal damage. If possible, try to have a few subs with Resist, Crit R, and Accuracy. Violent/(Guard/Blade/Broken) – (Def%/Crit D%/ Def%) This build is all about damage output. Built properly, Velajuel’s second skill – Punishment, can deal upwards of 40-50K! Due to his awakening providing 15% Crit R, It shouldn’t be too difficult to reach 70% Crit R before stacking as much Defense and Crit D as possible. When trying to decide between Crit D and Def, try to reach at least +1500 Defense and 150% Crit D before focusing on one or the other. I find an even ratio of both usually yields the best output.

Guild Wars: One of my most commonly used GW offenses is Theo/Velajuel/Chasun. Once Velajuel uses Sanctuary, there are very few, if any teams I lose to with this trio. When dealing with annoying seara teams, I often use Velajuel, Rina, and a Fire nuker such as Daphnis or Fire Monkey King. Again, once Velajuel gets Sanctuary up, it’s an almost guaranteed win. Using 2 fire monsters with Rina on will runes makes Seara much more controllable, even against Seara/Orion types of defenses. Velajuel pairs extremely well with most bruisers in both Arena and Guild Wars comps. Test him out with different monsters of varying elements and find the setup that works best for you.

Skill 1: Heavenly Sword: Attacks with a heavenly sword, removing a beneficial effect on the enemy with a 75% chance. The damage increases according to your Defense. Skill 2: Punishment: Deals damage with flames of punishment and inflicts Continuous Damage for 3 turns. The initial damage increases according to Defense. (Reusuable in 4 turn(s)) Skill 3: Sanctuary: Removes all harmful effects on all allies, granting them immunity for 3 turns, and increasing the Attack Bar by 30% (Reusuable in 6 turn(s))
]]>