<![CDATA[The wind lizardman is a natural 3 star defense monster. He has a base attack speed of 102. <table align="center"> 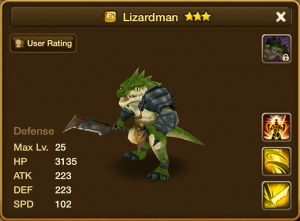 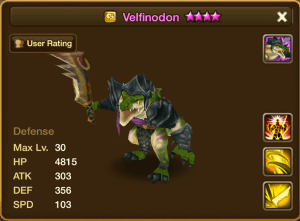 Awakened Bonus: Increase ability: Increases Effect Accuracy by 25% Skill 1: Poisonous Teeth: Attacks the enemy 2 times and weakens the enemy’s Defense and inflicts Continuous Damage for 2 turns with a 15% chance with each attack. The Attack Power increases according to Defense.

Skill 2: Poisonous Whirlwind: Attacks all enemies and inflicts continuous damage for 3 turns with a 50% chance. The Attack power increases according to Defense and the damage increases by 30% for each removed harmful effect. (Reusable in 4 turn(s)) Skill 3: Bone Scale (Passive): Reflects 10% of the inflicted damage to the attacker when attacked and provokes the attacker for 1 turn with a 30% chance. [Automatic Effect] Rune Recommendations[2/4/6] Defense – Guard(Hp%/Def%/Acc%) Speedy – Swift/Endure(Hp%/Def%/Acc%) More turns – Violent/Revenge(Hp%/Def%/Acc%) Feel free to rate him below to share your experience with other players!]]>