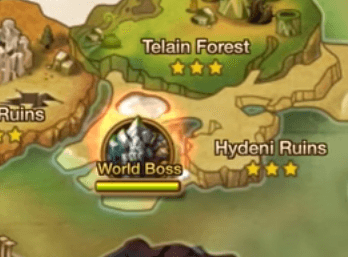 The world boss appears in the general map. You can use up to 20 monsters to battle the big bad guy. You got 10 in the front and 10 in the back line. I recommend using a full team with 0 healers. Your goal is to put in as much damage as you can. Healing doesn’t help that so bring plenty of single target damage dealers. Also, each day, your monster can only be used once.

If you don’t have established 6 stars, just bring whatever you got. Your goal is to get the highest rating possible. A high rating means a better chance to get L/D scrolls, Legendary scrolls and Devilmons. Since you are able to do attack the Ancient Giant 3 times a day, you should always do it since each attack is only 10 energy.

Tips: If you don’t have enough monsters to fill, just use hellhounds. Do whatever it takes to do this. A small chance to get any of the good stuff mentioned above is nothing to scoff at. Aim for D Rank if you are new and aim for at least A Rank if you are a veteran player with a set of 5 star and 6 star monsters. Also upgrade all your runes to +12(even the crappy ones) for all the monsters you use to improve your ranking. Every little bit counts and the faster you can get a better rank, the better items you get in the long run. I also suggest you do not stray away from building your Giants/Dragons/Necropolis team in favor of the World Boss. Treat the World Boss as a bonus dungeon to do.

With the release of the the new patch, the Raid Rift Boss is added and you are to fight a 3 headed dragon with 2 other players. They can be guildmates or friends. Each player can put up to 6 monsters. You can choose to put up to 4 monsters on either the back or front line. However, you can only field up to 3 per line. There are 5 levels of the Rift Boss, with each level harder than the previous one. Important things to know so far: Here is a guide on how to beat level 5 Rift Raid Boss by Coldsteel: I will be adding more as I find more strategies, probably from the Koreans. 🙂 Credit: ChildishPlays]]>