<![CDATA[Welcome back to <em>A Newbie’s Guide to Fusing Veromos! Today we will be working on Mikene, the water Undine! Where we left off, in “Prologue and Kumae,” you’ve successfully acquired Kumae from the secret dungeons and he’s been awakened and 4-starred. We will fuse Mikene first, as she’s the easiest to acquire the monsters needed to fuse her. Every monster needed can be acquired from Secret Dungeons. With that, let’s begin with… 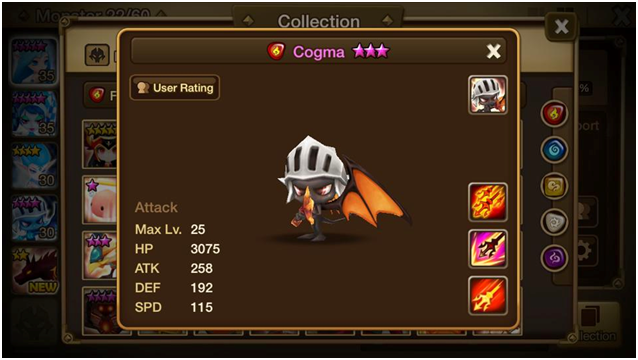 Cogma is the fire Imp. He can be acquired from Unknown Scrolls, Social Summons, Temple of Wishes and from Secret Dungeons. Like always, many people prefer to use the latter in order to acquire him to start fusing Veromos. The Hall of Fire opens on Tuesdays, which will be your chance to acquire the fire Imp and his awakening essences. Because he is a two-star monster, you’ll need 20 of his Secret Dungeon pieces in order to summon him in. The essences needed in order to awaken him are: 20 Low Fire Essences 15 Low Magic Essences Once awakened, it would be best to four-star Cogma as soon as possible. You can do this by taking him and a strong monster to Faimon Volcano, preferably a rep from one of your friends, because, even when a monster is maxed out, they still take part of the EXP. Rep monsters, on the other hand, don’t take EXP, so the monster you own will get all the EXP, like they did the scenario run themselves. Alternatively, if you have any Angelmons, you can feed them to Cogma, but I personally wouldn’t waste any time using them until he’s been four-starred. As soon as you’ve awakened, four-starred and maxed out Cogma, put him in storage, right next to Kumae, and we’ll begin working on the next monster needed for Mikene. 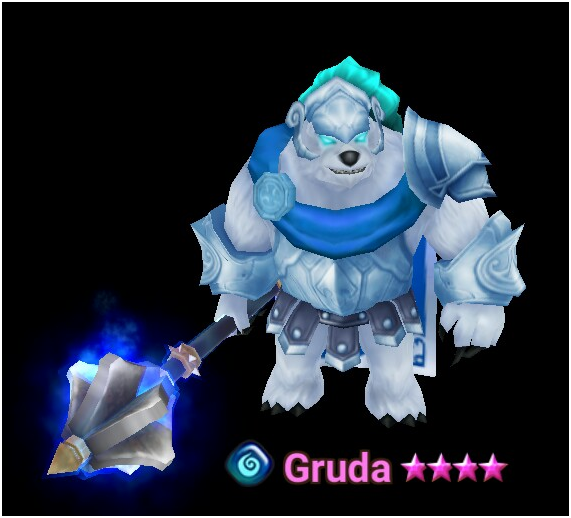 Gruda is the water Bearman, and can be acquired in Unknown Scrolls, Mystical Scrolls, Social Summons, Water Scrolls, Temple of Wishes and Secret Dungeons. We’ll be getting his Secret Dungeon in this tutorial. You can find his Secret Dungeons on Wednesdays, as that’s when the Hall of Water opens up. He is a 3-star monster, and will need 40 pieces in order to acquire him. As soon as you have him on your island, you will need these essences so that you can awaken him: 15 MID Water Essences 10 Low Water Essences 10 MID Magic Essences 5 Low Magic Essences Once more, Faimon Volcano and/or Angelmons as soon as Gruda is four-starred are the ways to go in order to quickly level him up. After you get him to level 30, he’ll temporarily be in storage. Due to it still being water day, the next monster we will be working on is Hemos. Quick fun fact: The Bearmen are the only family of 3-star monsters who have Secret Dungeons for all members of its family. 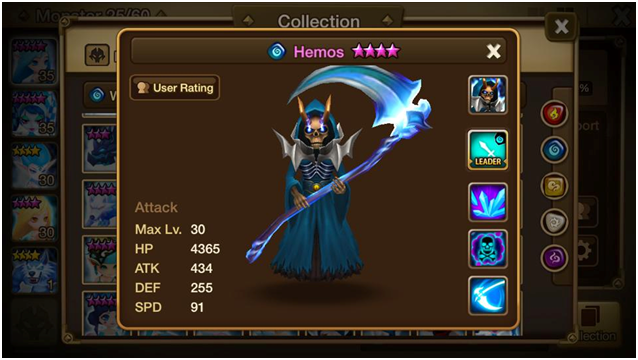 Hemos is the water Grim Reaper, and although he can be obtained through the Temple of Wishes, Social Summons, Unknown Scrolls, and Mystical Scrolls; most people choose to either find his Secret Dungeon or buy his summoning pieces through the Guild Shop. Since I’m assuming you’re not in a position where you can easily just buy all 40 of his summoning pieces through the Guild Shop, you’ll have to acquire him through the Secret Dungeon. It’s best you mostly take water and wind monsters when you’re in his Secret Dungeon, in order to gain an elemental advantage. His second skill, Plague, is very dangerous when he’s in large groups, because if the continuous damage effects keep stacking up, they’ll be able to instantly kill a monster. An essential part of your early-game team for the Hemos Secret Dungeon should be Konamiya, the water Garuda. His third skill when awakened, “Peace,” will be able to cleanse all harmful effects off of allies, along with a 15% HP heal on everyone. 15 MID Water Essences 10 Low Water Essences 10 MID Magic Essences 5 Low Magic Essences You probably know the drill by this point: Faimon Volcano/Angelmon (Four stars only!) put away in storage, work on Anduril. 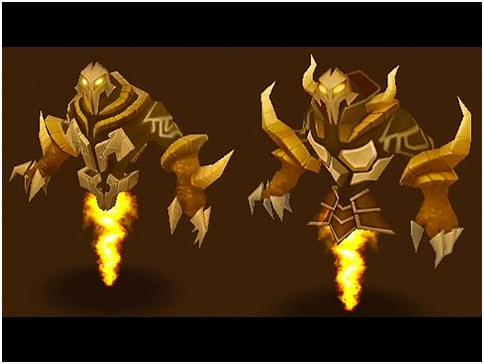 Anduril is the wind Inferno, and is most commonly found in the Secret Dungeons. Some other, lesser used places you can acquire him are Unknown Scrolls, Social Summons, Mystical Scrolls, Wind Scrolls and the Temple of Wishes. Thursday is when the Wind Dungeon opens, and is the last elemental dungeon of the week. After that, you’ll have to wait until Friday and Saturday are over until you can encounter a Secret Dungeon, which is the Hall of Light on Sunday. (Quick tip: If you intend to farm the Hall of Light, do it in an abandoned channel. Trust me; you do not want to take a risk and end up announcing to the world you just found a Belladeon Secret Dungeon.) When you yourself have a Secret Dungeon – or have a friend that does have an Anduril Secret Dungeon – you’ll need to get 40 pieces, as he is a three star monster. Anduril will consume these essences upon his awakening, so make sure you have enough: 15 MID Wind Essences 10 Low Wind Essences 10 MID Magic Essences 5 Low Magic Essences I have calculated upon his awakening and four-starring, you would need about 7 maxed out and awakened Angelmon in order to max him out, if they’re the same element and you get no lightning, which means that the experience you get from that power up has been increased by 1.5%. Instead of putting him in storage, you’re going to take out Cogma, Gruda and Hemos, because it’s fusing time! 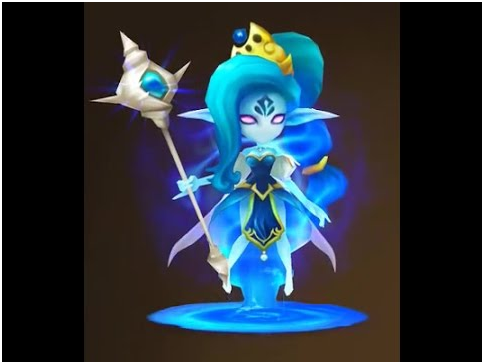 All the pieces of the puzzle have been completed. You’ve gotten Cogma, Gruda, Hemos and Anduril, and it’s time to fuse Mikene, the water Undine. You’ll need 100,000 mana and all four fusion monsters in order to fuse her. Once fused, the essences you’ll need to awaken her will be: 10 High Water Essences 20 MID Water Essences 5 High Magic Essences 15 MID Magic Essences Upon her awakening, she’ll have her first skill, Ice Drop, strengthened. She’ll be able to freeze the enemy if it lands as a critical hit. I actually recommend fusing three Mikenes (but stick with one at first for Veromos) The other two will be used in fusing Katarina, the wind Valkryja and the last one to keep. Mikene is not at all a bad monster. In fact, I consider her a great healer and reviver for early-game players. Her third skill, Revive, will revive one ally of choice with 40% of their HP brought back. If she uses it on herself, she’ll receive the Soul Protection buff for 3 turns, which will instantly revive her if killed. Mikene’s second skill, Aqua Frenzy, also attacks all enemies, increases their chance of landing a glancing hit for two turns, and will heal the ally with the lowest amount of HP by 25%. I’ve never needed to use her, though, because I got extremely lucky early-game and summoned a Platy, and then Eladriel a month after summoning Charlotte. For the unluckier players who can’t immediately get their hands on some of the top-tier healers in the game, I say you should get another Mikene after fusing Veromos. If you do decide to keep one, a good choice of runes for her would be Violent and Energy, slot 2 having SPD, slot 4 HP%, and slot 6 HP%. I can’t give you a full guide on how to properly rune Mikene, so please click here for a more in-depth explanation. Total amount of essences needed for fusion monsters + Mikene: 10 High Water Essences 50 MID Water Essences 45 MID Magic Essences 5 High Magic Essences 15 MID Wind Essences 10 Low Wind Essences 30 Low Magic Essences 20 Low Fire Essences Like Kumae, you’ll need to max out and awaken her before you put her away until you have Akia and Argen. Speaking of Argen, check back soon for the next part of A Newbie’s Guide to Fusing Veromos, where we’ll be getting the wind Vampire next!]]>