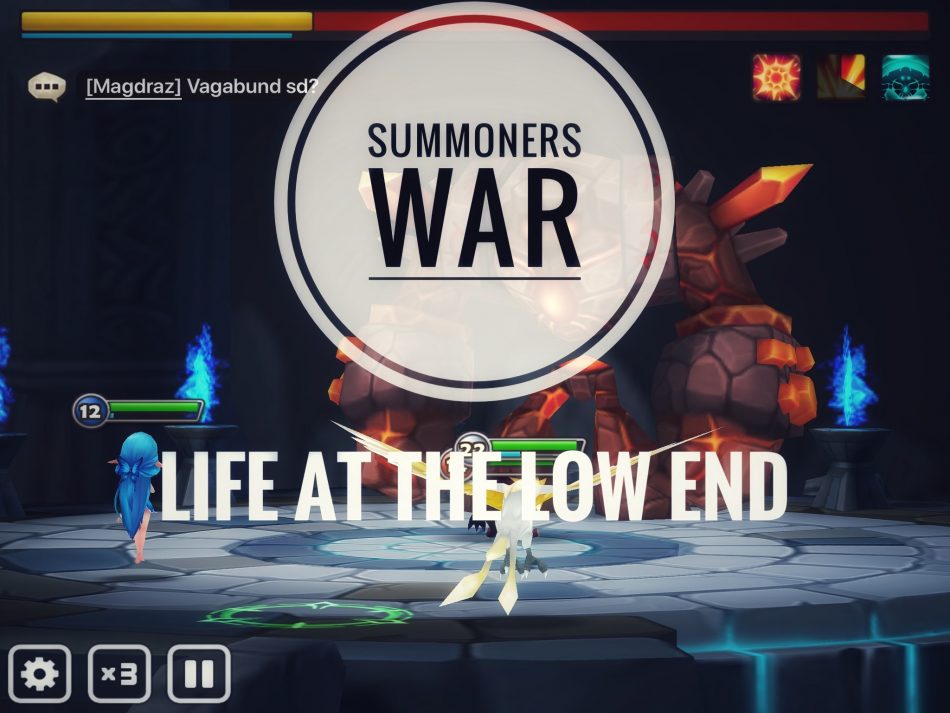 <![CDATA[<img onerror="this.src='https://summonerswarskyarena.info/wp-content/uploads/2021/09/sw-image-not-found.jpg'" decoding="async" class="aligncenter wp-image-17610" src="https://www.summonerswarskyarena.info/wp-content/uploads/2018/03/1-1-1024x768.jpg" alt="" width="600" height="450" /> Welcome back to Life At The Low End! The place where we take new players and confused veterans by their trembling hands and lead them into the promised land of viability. If you haven’t checked out part 1, take a look here. We’ve successfully gotten through Garen Forest, we’ve set up our island Defense, and we’ve defeated our first Arena opponent. So…now what? Now we introduce ourselves to the newest member of the team, that’s what. 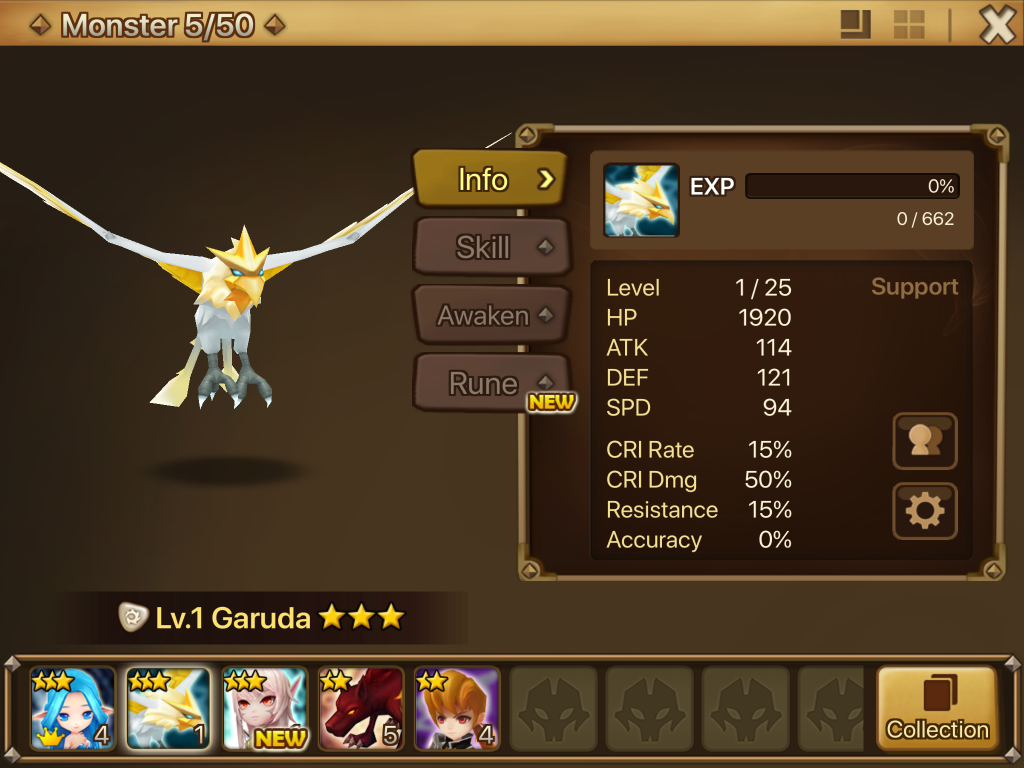 The Light Garuda (and his awakened form, Teon) is a valuable team member you’ll be slotting into your squad now that our buddy Durand has seen fit to mail him to you. He’s got a useful single target speed buff, can heal your whole team at once, and can also bring back a dead unit in a pinch. His most interesting feature may be his “element.” As a Light creature, he is not affected at all by the usual Rock>Paper>Scissors relationship of the 3 main elements of Fire, Air, and Water. Until you start seeing Dark creatures there will be no enemy that he is especially vulnerable to. We’ll take advantage of this lack of elemental vulnerability by throwing him into the lineup before we start climbing the volcanic slopes of Mt. Siz. First, however, we need to perform a little preliminary work. Since he is a brand new addition to our growing stable of creatures, he is a bit underpowered currently. We will address this immediately by heading back into Garen Forest to grab two Energy runes for him. This will not only give him the built-in 15% Health boost but also grant him a bit of experience as well. Put together a lineup of your Fairy, your Hellhound, and your shiny new Garuda, and send them through Garen Forest Zones 5 and 6 until you have collected one rune for each slot. Place them on your Garuda, and you are set to carry on with Mt. Siz. 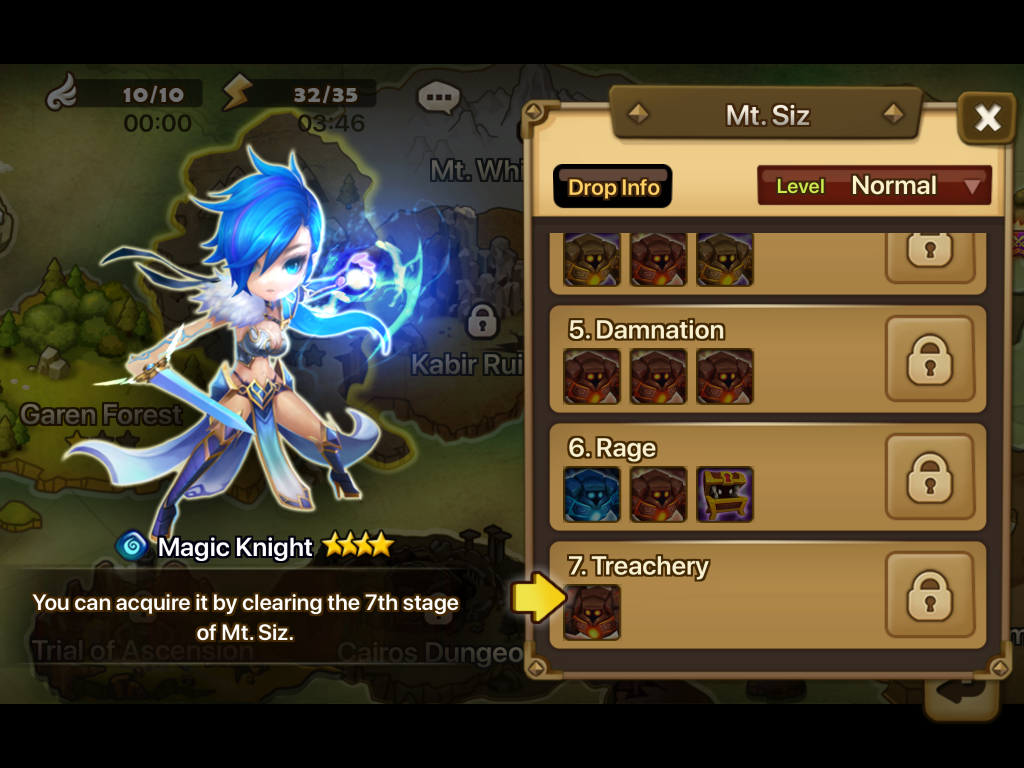 Mt. Siz is pretty exciting not due to its challenge, but its reward: after completing Mt. Siz we will be rewarded with our first 4-star monster, the (Water) Magic Knight. She’s an amazing creature, with multiple Area of Effect attacks and an ability that allows her to self-heal based on how much damage she does. Get used to her: you’ll be seeing the Magic Knight (and her awakened form, Lapis) for a good, long while. Looking over the list of upcoming opponents within the confines of Mt. Siz will show an alarming amount of Red…Fire creatures abound within this Zone. At this level of difficulty, Mt. Siz will only allow you to bring a 3-creature team. So, how to best maximize your team’s strength against a zone teeming with fire creatures? Build out a team of your Water Fairy, Your Fire Hellhound, and your Light Garuda. The Water element enjoys a combat bonus against Fire creatures, and your Hellhound and Garuda are both elements neutral against these opponents. Your poor Wind Vagabond suffers a combat penalty against Fire creatures, and would spend quite a bit of time deceased and unavailable were we to use him in this Zone. This team also enjoys a secret weapon, of sorts: all 3 creatures on this team include a healing effect of some kind. The Hellhound’s “Bite” attack heals him for 30% of the damage it does, the Fairy’s “Purify” casts a powerful heal on a single target, and the Garuda comes with the “Light of Recovery” ability which recovers HP for the whole team. This promotes great sustainability through the whole team as you progress through the zone. Following our formula from Garen Forest, we want to stay in each Zone until our creatures are appropriately runed. This will mean that we collect Fatal runes in Zones 1,2,5, and 6 for our Hellhound, and Zones 3 – 6 for our Fairy leaving them both with +35% bonuses to their Attack Power when we triumph at last over the giant Golem in Zone 7.

At some point during your travel across Mt. Siz, you will achieve Level 5. 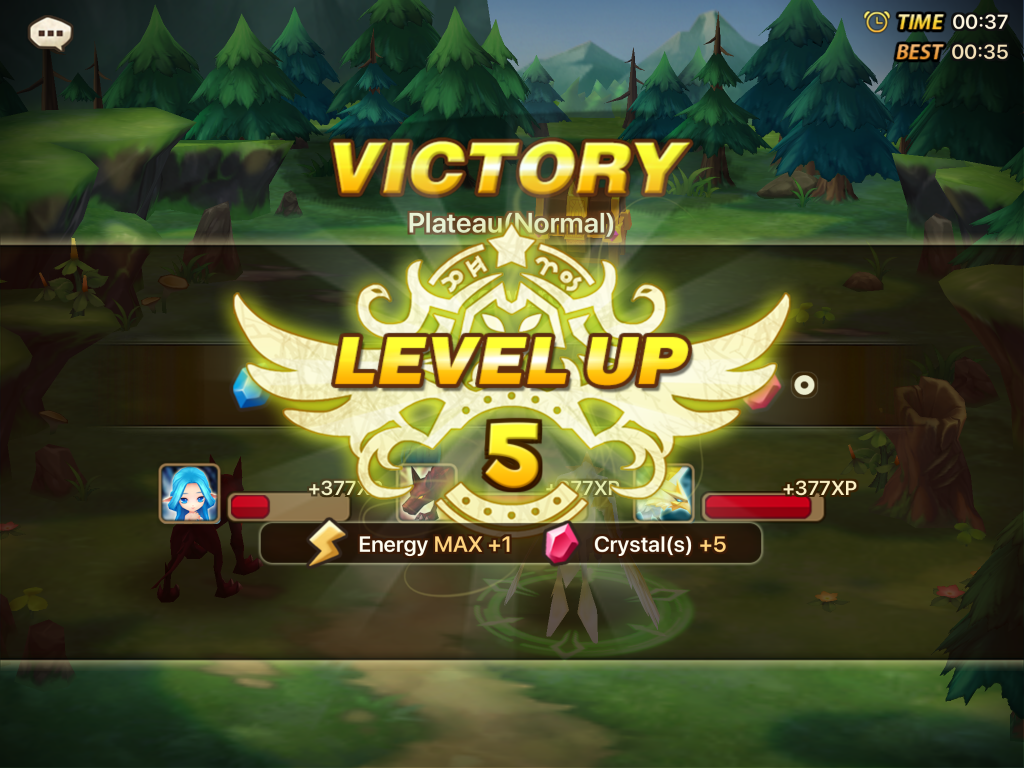 When you reach this point, take a break from your slog through Mt. Siz and head back to the Island. It turns out your faithful assistant has a little project for you: 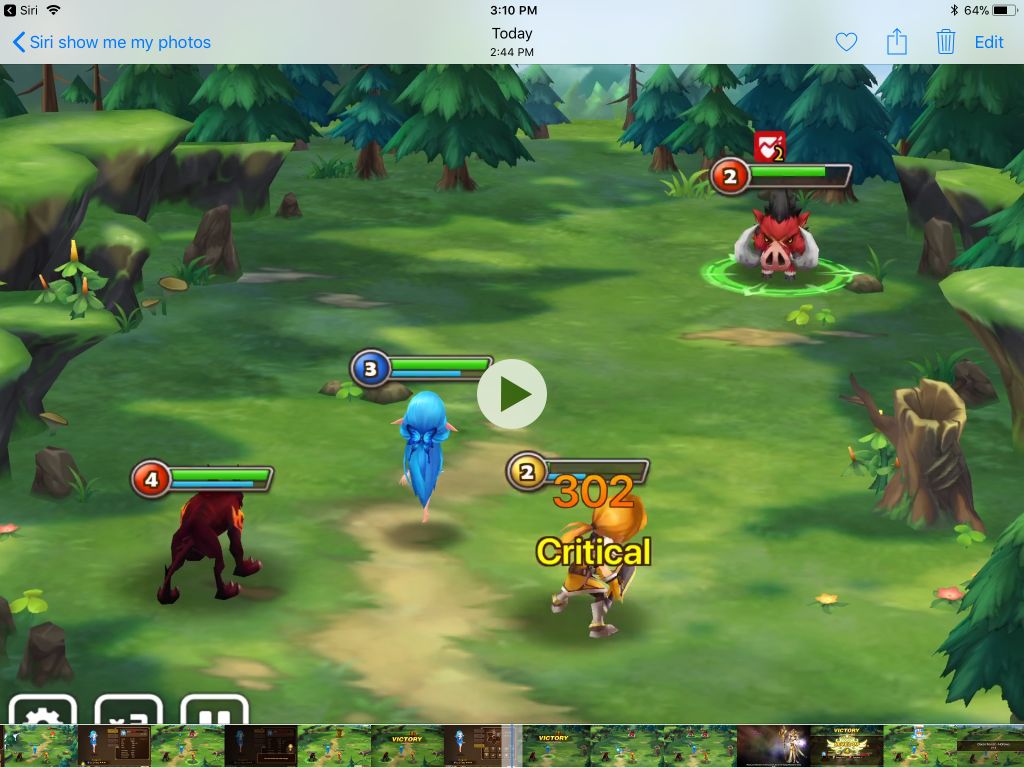 Ellia would like you to get a complete Fatal set (+35% Attack) set up on one of your creatures. Given that you are going through the process of developing 2 complete Fatal sets currently, one for the Hellhound and another for your Fairy, this should not be too difficult. Completion of the task will result in yet another notch on the “Challenges” tally, where you are still hopefully stacking away accomplishments to use on a rainy day without XP. Don’t be alarmed if it takes a while to complete your full collection of Runes – things like silver 1-star monsters and Unknown Scrolls will start dropping more and more regularly at this point. Squirrel these away – you are going to need them very soon. It is even possible that you may get yourself all the way to Level 6 before completing Mt. Siz. If so, head back to the Island again to see what has developed. You’ll find a valuable new addition to your Island real estate: The Store. 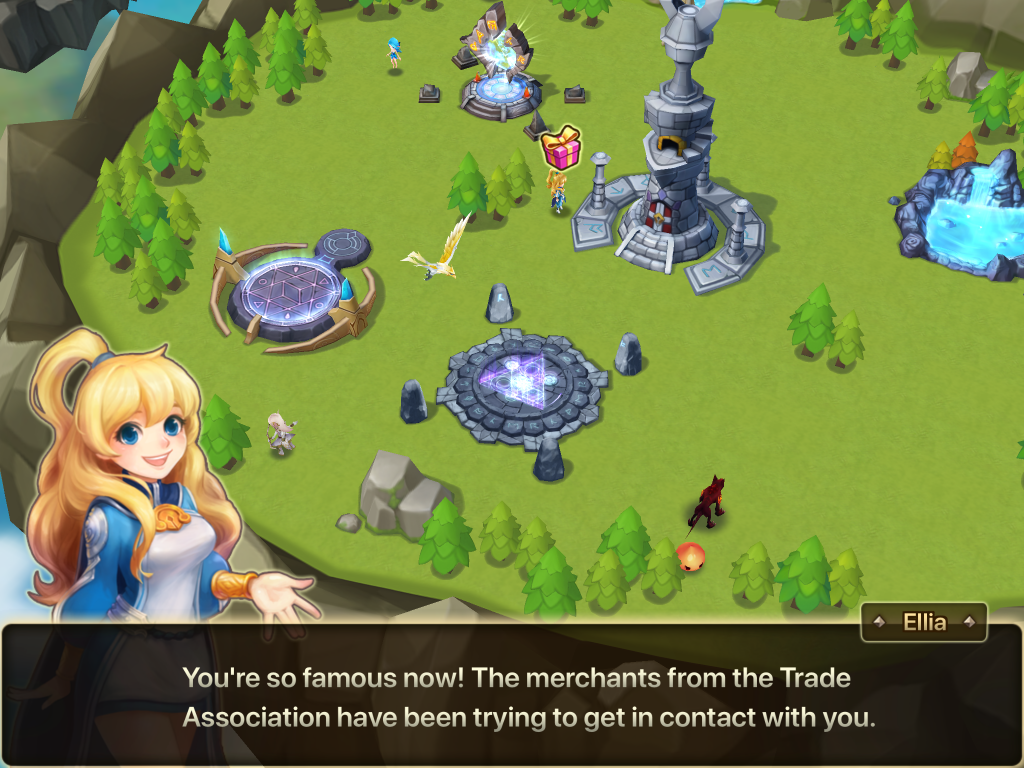 The store is going to be very important to you in coming days and weeks – it can provide you with new creatures, scrolls, and even level-appropriate runes. Only half of the “slots” are currently unlocked, however. I recommend that you cough up the 1,000 Mana Stones and 10 Crystals required to unlock the next 2 slots. The prices will go up steeply from here, but I suggest that you save Stones and Crystals specifically for the purpose of getting all 12 slots of the store unlocked as soon as possible. The items you can buy there really are that important. Ellia will also want you to power-up one of your Runes to +3 as a Challenge at Level 6. Don’t invest your money into just any rune, though. You’ll be replacing all of your 1 and 2-star runes in short order. Instead, look at your installed Runes and try to find a 3-star rune in Slot 1, 3 or 5 on any creature and upgrade that. Those slots are the least likely to change soon – we’ll cover why next week.

Your arrival at Zone 7 of Mt Siz, after gathering 2 full sets of Fatal runes, should coincide with your fearless group being somewhere in the area of levels 7 through 10… 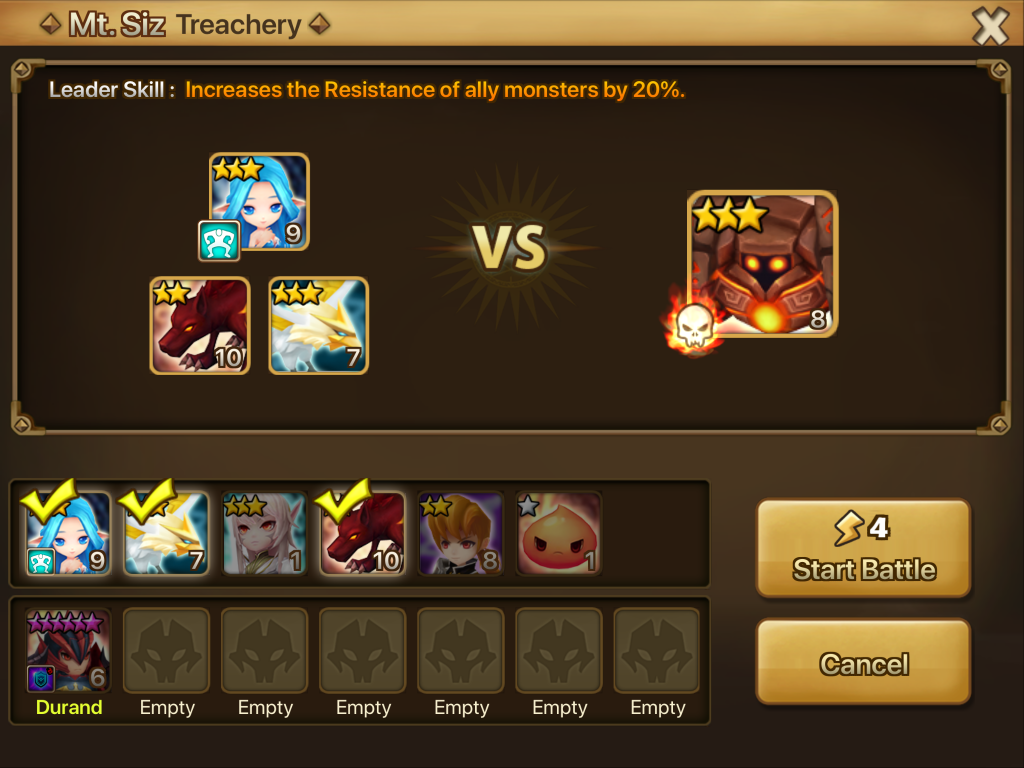 …which should be plenty to see you victorious over the Ur-Golem: 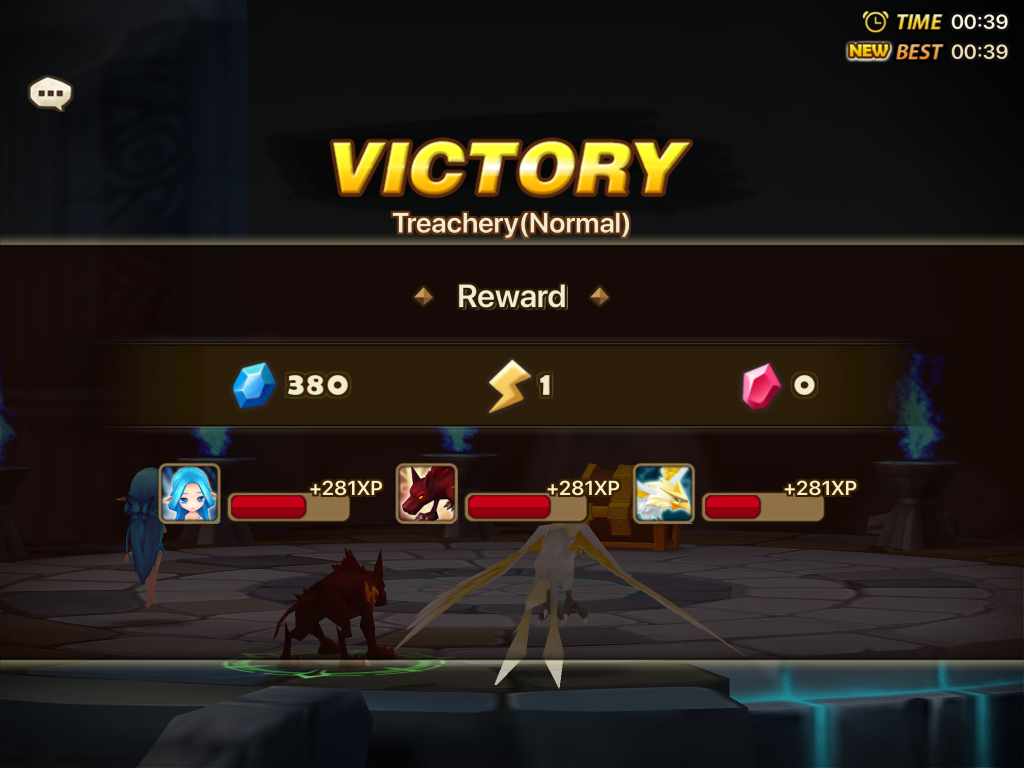 The completion of Mt. Siz will result in the unlocking of a MAJOR offensive upgrade – the Water Magic Knight. She will become the centerpiece of your team for quite a while to come, once you have her appropriately runed and ready for action. Before you tackle that project, however, take a break! Stretch out, restore the blood flow to your lower extremities, and prepare yourself for the next step in the process: next is where the rubber starts really meeting the road. Until next time]]>