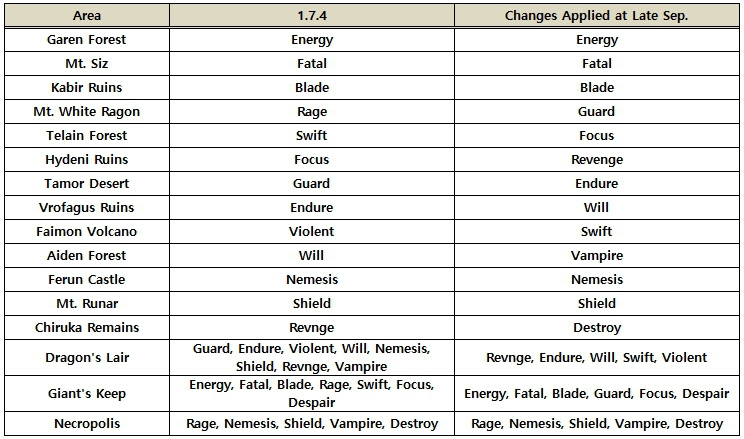 Hi, I’m a developer for Summoners War! It’s been 2 months since I’ve last reached out to everybody through the Developer’s note. I hope everybody is doing well! I’ve got lots to talk about today, so let’s get started! ▶ New Dungeon First off, let’s talk about the new dungeon, the “Necropolis” and the boss, the “Ancient Lich King”. The Necropolis is a dangerous place, where the dead walk and attack every living life that intrudes the dungeon. The Ancient Lich King harnesses the power of death. ▶ Necropolis Rewards (Rune Drop Changes) – You can get the following Runes at the Necropolis: Vampire Rune, Nemesis Rune, Shield Rune, Rage Rune and Destroy Rune. Some users might be wondering why some of these Runes are going to be available at the Necropolis, but there’s a reason to this. After the updates scheduled at late September, the acquirable locations of all Runes are going to be adjusted. Until then, during the v1.7.4 update, the same Rune may be available at multiple locations. Check out the chart below for more details.http://i.imgur.com/WGS0zsy.jpg We hope that Rune farming will become much more convenient with this adjustment! Now let us move on to the new Rune! ▶ Rune Spotlight: “Destroy” Rune Please note that the Destroy Rune effect does not apply to bosses. We hope that the addition of this new Rune will bring a whole new set of strategies and creative plays to the game. That’s about everything I’ve prepared for the new Dungeon and Rune! I hope you’re excited about the upcoming v1.7.4 which will contain the new Necropolis and Destroy Rune. The balancing for the patch is still in progress, so please note that the actual update may turn out to be different from what I’ve shared today. I hope to talk to everybody soon again. The Summoners War team wishes everybody the best and would like to give thanks for all their love and support. In return, we promise to work hard to provide better service and even more fun content! Thanks! http://i.imgur.com/oYuivnz.png PS. Here’s a bonus image we’d like to share. This is an image of content scheduled for the future. What kind of content, you ask? I can’t tell you yet, but I promise to share more information as soon as I can!