<![CDATA[You’ve gotten <a href="https://summonerswarskyarena.info/a-newbies-guide-to-fusing-veromos-part-1-prologue-and-kumae/">Kumae, you’ve fused Mikene, and now it’s time to fuse Argen; the wind Vampire whose fire brother is way better than him! We’re about halfway there to getting to the good demon wrapped in darkness that is Veromos, so hold onto your hats, ladies and gentlemen. Prepare your friend list, get those crystals ready for energy refills, and please make sure to keep your hands and legs in the seat at all times. This fusion will be significantly harder, as only two out of the four monsters needed to fuse Argen can be acquired from a secret dungeon. Thankfully, all four are farmable in the end. When you start fusing the other three (again, soon to be four) natural five-star fusion monsters, though, that’s not going to be the case, so you better get ready ahead of time. 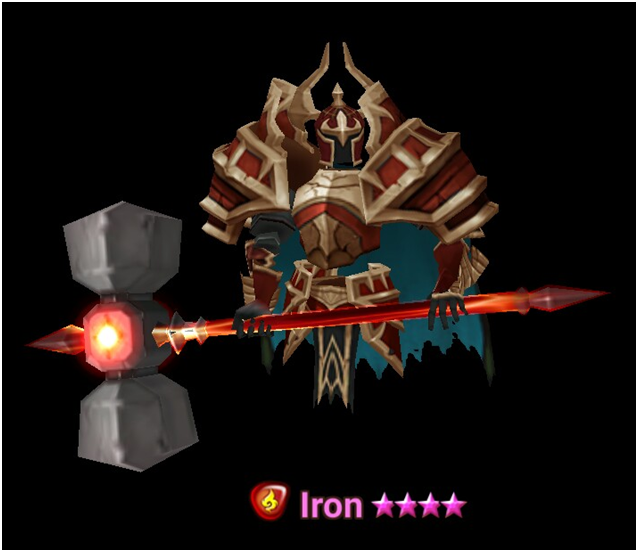 Today, we’ll begin with Iron, the fire Living Armor, the monster species who, in my headcanons, are the distant relatives of the Occult Girls’ Toy Knights. His wind and dark brothers are, like, really really good, but we’re not talking about Zinc and Copper. He is a three star monster that can be found in the Temple of Wishes, Social Summons, Unknown Scrolls, Mystical Scrolls, Crystal Summons, Fire Scrolls and is also randomly dropped in a certain scenario. Because most people don’t want to rely on RNG to give them these chunks of metal from scrolls, we’ll be focusing on the scenario when it comes to acquiring Iron. The only scenario that he can be acquired from is Ferun Castle, right in between Aiden Forest and Mt. Runar. I recommend that you farm the first stage of the highest difficulty that you can auto without needing to revive (e.g. Farm Hell 1 if you have a 100% auto success rate) Just remember that Hard has a higher drop rate than Normal, and Hell a higher drop rate than Hard. It will most likely take you quite a few days to get Iron, but in the meantime, I’ll show you what essences you need to awaken him. Note: as of this writing, I got some advice that says that you should wait until you’re about to fuse, because you might pull the awakened version a monster from scrolls: 15 MID Fire Essences 10 Low Fire Essences 15 MID Magic Essences 5 Low Magic Essences When Iron finally drops from Ferun Castle, awaken him and max him out. The most effective way to do so is through Faimon Volcano, using friends’ reps. You can use Angelmons, but I strongly recommend you wait until you four-star him before you use up any Angelmons on him. Iron will be able to temporarily meet Mikene and Kumae in storage, because up next is… 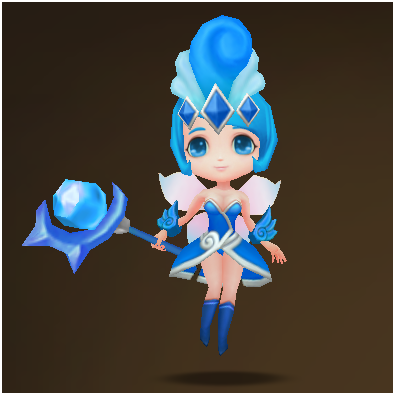 Kacey, the water Pixie, has most likely been used as skillup material for her wind sister, Shannon, who is also an essential part of a beginner’s GB10 team, but we’ll touch on that subject in Part 5. For now, though, we’ll work on acquiring Kacey. She’s a two star monster that can be acquired from the Temple of Wishes, Unknown Scrolls, Social Summons, the Magic Shop and Secret Dungeons. Although she’s fairly common, if you seem to be low on luck I recommend that you try and find her secret dungeon. (Believe me; once I accidentally fed away my Kacey and it literally took me a week to get her from the shop. I kid you not.) Maxing her out at first will be easy; due to being a two-star monster, all you need are a few Faimon runs and some silver-star fodder, and just like maxing her out, evolving her will also be easy. As I’m writing this, the latest updates were the support Homunculi, which also increased the drop rates of three star Rainbowmon, and Season 2 of the Real Time Arena. You can use some of the Rainbowmon you got from the dungeons while farming for essences to evolve her after that. Speaking of awakening, the essences needed to awaken her will be: 20 Low Water Essences 15 Low Magic Essences Don’t awaken her just yet, because, as I’ve said, I’ve received advice that says you should wait until you’re about to fuse the monster, in case you get the awakened version from scrolls. For now, though, don’t use up those essences. Put her in storage, with Iron, Mikene and Kumae, because up next is… 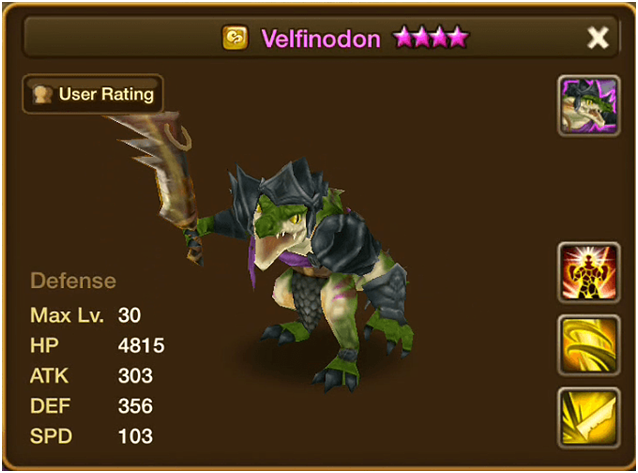 Velfinodon, the wind Lizardman, is a three-star monster, and can be found in Wind Scrolls, Unknown Scrolls, Mystical Scrolls, Social Summons, and Secret Dungeons. He’s pretty much the only semi-useful member of his family, and even then he’s only useful to fuse Veromos with. Of course, we will be getting him through his Secret Dungeon. As a three-star monster, you’ll need 40 pieces in order to summon him. Like Hemos (who we talked about in Part 2), he’s actually kind of dangerous in large groups. Both his first and his second skill inflict Continuous Damage, which we all know is scary when one of your monsters has a lot of these effects on them. If that’s not enough, he also has a defense break on his first skill, along with a passive that reflects 10% of the damage back on the monster that attacked him. Cleansers like Konamiya will get rid of the defense break and the Continuous Damage, but I don’t have any tips for his passive skill. The only two monsters with Oblivion (a debuff that prevents passive skills from being used) is Tesarion the fire Ifrit, who can only be acquired late-game, and Isis the light Desert Queen, who is a light natural five-star so you can’t have her unless you got extremely lucky early game and summoned her, in which case feel free to use her against the Velfinodon Secret Dungeon. Four-star and max him out, but do not awaken him yet. I highly recommend that you collect the essences he needs ahead of time, though. Here’s what he needs to be awakened: 15 Wind MID Essences 10 Wind Low Essences 10 Magic MID Essences 5 Magic Low Essences You’re almost done fusing Argen, now! Put Velfinodon in storage without awakening him just yet. The last monster you need before fusing Argen is…

The final piece in one of the main puzzle pieces, Eintau is the wind Minotauros. Finding this monster will be significantly harder, as, like Iron, he can only be acquired from scenarios. From what I’ve gathered, the only scenario that he’s available in is Chiruka Remains. Despite that, though, you can also find him in Unknown Scrolls, Social Summons, Wind Scrolls, Temple of Wishes, Crystal Summons and Mystical Scrolls. I still recommend that you try and go looking for him in Chiruka Remains. Some of you may not have unlocked that scenario and/or can clear it by themselves, in which case I strongly advise you take a strong friend’s rep. Some good choices include Chow, Laika, and Theomars, who are, respectively, the water and fire Dragon Knights and the water Ifrit. Awakening him, which you should save until you’re ready to fuse Argen, will take these materials: 15 MID Wind Essences 10 Low Wind Essences 10 MID Magic Essences 5 Low Magic Essences Keep him four-starred and maxed out, because now you’re finally ready to fuse the pretty vampire boy, Argen!

It’s finally time to fuse Argen. After him, all you’ll need is Akia before it’s time for the long, tedious grind that is five-starring and then maxing everyone out when it comes time to fuse Veromos. By this time, you should have collected all of your awakening essences. You can take them all out of storage once they’re four-starred and maxed out (Level 30, if you’ve forgotten) You can now also awaken all of them, because now it’s time to fuse! Once you have Argen, you’ll be needing these essences to awaken him (Again, don’t awaken until you’re about to fuse Veromos!): 12 High Wind Essences 15 MID Wind Essences 10 High Magic Essences 15 MID Magic Essences Overall, these are all the essences you’ll need to awaken everyone needed, including Argen himself: 12 High Wind Essences 45 MID Wind Essences 10 High Magic Essences 50 MID Magic Essences 20 Low Water Essences 30 Low Magic Essences 15 MID Fire Essences 10 Low Fire Essences While Argen isn’t nearly as good as his fire brother – who I’m lucky to have, as Verdehile is a very important part of my DB10 team – he’s not so bad he’s unusable. The damage on his third skill, Death Blow, increases by 25% for every harmful effect that’s on the enemy. If you have a Continuous Damage Dealer and they inflict two Continuous Damage on an enemy, when Argen uses Death Blow, the damage he does is over 50% more than if there was no harmful effect. If you also put Brand and Defense Break on an enemy, both debuffs increasing how much damage an enemy takes; not only will the damage increase because of those two debuffs, but Argen’s Death Blow will also have 100% more damage. I don’t have an Argen, other than the one I fused for Veromos and the dupe that showed up in a Mystical Scroll when I was LOOKING FOR CHIWU; but if you don’t have any other attackers, you could use this guy. Please note: If you do have Verdehile (Fire Vampire), do not go through the effort to skill him up or fuse a bunch of Argens for skillups. Verdehile is actually at his best without skillups, because if you decrease the cooltime of his second skill, Noble Agreement, he’ll tend to use it more, so instead of a 40% attack bar increase, you’ll only get 20%. I’m not going in-depth about him, because this is an article about fusing Veromos, so keep Argen four-starred, maxed out, but not awakened, and he’ll be joining Kumae and Mikene in storage. Up next will be Akia, and then Veromos himself!]]>