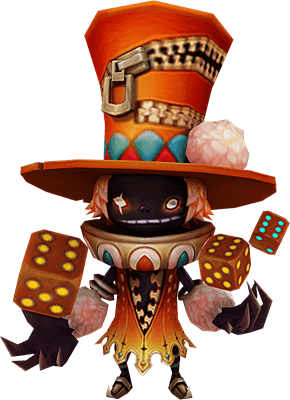 Increases the Defense of ally monsters in the Arena by 33%.

Rolls 2 dice to attack the enemy target 2 times and grants an effect according to each number you get for 2 turns as follows; 4: Unrecoverable, 5: Decrease DEF, 6: Increased chances of landing a Glancing Hit. Instantly gain another turn if you get the same number.
Multiplier: 190% x2
Show Skill Ups

Rolls 2 dice to attack all enemies and stuns them for 1 turn if the sum of the numbers is greater than 7, decreases the Attack Speed for 2 turns if the sum is less than 7. Instantly gain another turn if you get the same number. (Reusable in 4 turns)
Multiplier: 300%
Show Skill Ups

Leader Skill (Awakened): Increases the Defense of ally monsters in the Arena by 33%

Let us know what you think about Fire Dice Magician Ludo.

Here are our rune recommendations for Ludo. Click on each rune for more information.
If you are new to Summoners War, click here: Summoners War Rune Guide.