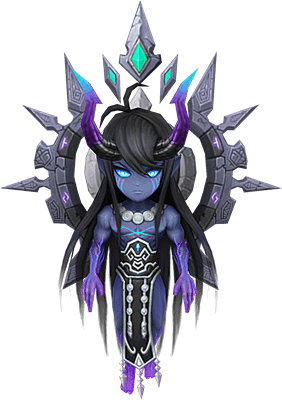 Increases the HP of ally monsters by 33%.

Attacks with magical powers and inflicts continuous damage for 2 turns with a 50% chance. The damage increases according to Attack Speed.
Multiplier: (Spd+210) / 0.7)%
Show Skill Ups

Attacks all enemies to inflict damage that's proportionate to the enemy's MAX HP and stuns them with a 30% chance. The target immune to stun will have the Attack Bar decreased by 50% each with a 100% chance. (Reusable in 4 turns).
Multiplier: 2.0*{ATK} + 0.15*{Target MAX HP}
Show Skill Ups

Removes a harmful effect, except inability effects, on all allies each turn and recovers 3% HP for each harmful effect removed. [Automatic Effect]

Let us know what you think about Dark Ifrit Veromos.

Here are our rune recommendations for Veromos. Click on each rune for more information.
If you are new to Summoners War, click here: Summoners War Rune Guide.

Veromos is the real MVP when it comes to early-game! He’s got everything you need for your starter GB10 team: Continuous Damage to put on the boss, an AoE stun for the waves before the boss, and a passive cleansing skill that’ll get rid of the defense break the giant inflicts on you! Veromos should absolutely be your first priority once you start out in the game, because he’ll seriously help you progress to GB10.
If you’re looking for a more in-depth guide on how to build Veromos for GB10 or how to improve your GB10 team, I would recommend you check out SWmasters guide on GB10 teams.
He’s also great for Trial of Ascension, too! He’s got an AoE stun, which automatically makes him good in ToA’s trash waves. The Continuous Damage is really nice, too, and the cleanse of his passive is always useful. But wait; there’s more you can use Veromos in!
Once you finish your GB10 team and have farmed it nonstop for about 6 months, your rune quality should have significantly improved, which means that you’ll be ready to try out DB10! That’s also somewhere that Veromos is great in. At the boss stage, the Dragon boss inflicts Continuous Damage, and one of the towers inflicts it as well. Veromos can cleanse all that.
Rune Recommendation: Swift + Energy, SPD/HP%/HP%

So Veromos falls off around late-game, sadly. There aren’t that many uses for him in late-game once you get your speed teams up and start to focus more on arena, but people still use him here and there in niche areas. Let’s never forget how useful Veromos used to be, though. We’ll just be eternally thankful for the good dark demon wrapped in darkness, and how he took our hands and carried us throughout early and mid game.
Veromos, we love ya.
Rune Recommendation: Violent + Nemesis, SPD/HP%/HP%